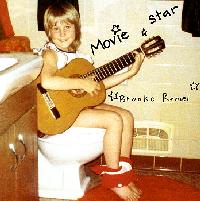 Recordings by singer-songwriters are certainly proliferating these days. It's not hard to fine very good CDs by practitioners of the art, even though few good singer-songwriters find their way to the commercial pop charts, when compared to records by bad alternative rock or schlocky pop bands. However, a few female singer-songwriters are selling significant numbers of records, including Jewel, Shawn Colvin, Fiona Apple and Sarah McLachlan, and that has made the atmosphere more receptive on the recording scene for contemporary women composer-vocalists. As a result, debut CD releases by female solo artists are proliferating. And a surprising number of them are very good. The result of such a glut is that the artistic standards are being raised. This year, we have certainly had our share of outstanding female singer-songwriter CDs that we have picked for this weekly album review series, including recordings by veterans like Patty Larkin, Christine Lavin, Eddi Reader, Indigo Girls, up-and-coming artists like Susan McKeown, and a very memorable debut by a singer-songwriter-trumpet player Kami Lyle.

This week we have another fine first release by a distinctive singer-songwriter who brings all the right ingredients -- first-class writing often with a touch of subtle wit, classy arrangements, and a wonderfully appealing voice. Her name is Brooke Ramel, and her CD is entitled Movie Star.

Ms. Ramel grew up in Leawood, Kansas, and migrated to the Los Angeles area to pursue her music. She held down the usual odd jobs usually taken by those attempting to make a career of music in Los Angeles, including teaching guitar and voice, and according to one report, playing for tips in restaurants and cafes in Orange County, California. She has started to develop a following, regularly performing in such venues as the Troubadour. She raised enough money to record her CD on her own, apparently last year, and is now beginning to go national with it on a Tennessee-based label called Rain Records.

She recorded Movie Star in Tennessee near Nashville and has come up with a genuinely charming record. Her music ranges from classic sensitive singer-songwriter fare to clever and often amusing compositions, delivered in a vocal style that is a mix of the slyness of Rickie Lee Jones with the innocent charm of early Joni Mitchell. The arrangements run from intimate piano to folky guitar, to hints of the Sgt. Peppers-era Beatles with vintage instruments and small-scale string arrangements, to a sprinkle of the edginess of the alternative rock scene. Her collaborator throughout the CD is one Johnny Pierce who served as producer, guitarist, bassist and co-composer with Ms. Ramel of the music to several of the album's tracks. Otherwise, this is a record with no big names on it, which makes it all the more refreshing, hearing such first-class playing by bunch of up-and-coming musicians such as drummer Dennis Holt, and keyboard players Howard Laravea and Dave Hoffner.

The album gets under way with its title track Movie Star, a rather clever consideration of star worship, and trying to get closer to a icon once met. The tune combines a folky undercurrent, including mandolin, with a kind of nervous rock edge. <<>>

One of the best sets of lyrics comes on the track Mainstream which considers the age-old question of what is supposed to be normal behavior compared to everybody else. The arrangement, and Ms. Ramel's vocal style takes a turn toward more, if you'll excuse the expression, mainstream rock -- or at least old fashioned folk rock. <<>>

Also with a bit of a retro sound is Down, a musical treatment of the axiom that what goes up must comes down, and all that implies. <<>>

Amusement park merry go rounds have drawn the attention of several songwriters, being an excellent metaphor for many facets of life. Brooke Ramel does a song called Merry Go Round, which takes a more introspective sound, with the arrangement dominated by Ms. Ramel's piano and the pair of string players. It's another highlight of the CD. <<>>

The termination of an affair forms basis of As for Me, which also is reminiscent of 60s folk rock in form and instrumentation. A bluesy harmonica adds a nice touch to this song that sounds as if it could have been written around 1965. Ms. Ramel overdubs her vocals on the chorus of the song and ends up sounding reminiscent of Indigo Girls. <<>>

Ms. Ramel does not look old enough to be getting nostalgic, but she comes up with a wonderful song of reminiscence called Sixteen Forever, no doubt inspired by a reunion with a high-school chum, and the inevitable memories that pop up. <<>>

An affair with a disreputable but oddly charming character forms the premise of the song Shotgun, with its chorus reminding me of the music to the old Blind Faith song Can't Find My Way Home. Ms. Ramel's arrangement is a great blend of the folky, rocky and that Beatlesque string duo. <<>>

The album ends with one its sadder songs, By the Sea, a composition contemplating a long-dissolved affair, and how that former significant-other is still missed. <<>>

Brooke Ramel's CD Movie Star is an impressive debut by a Midwest-bred Los Angeles resident who went to the Nashville area to record, and ends up sounding like no one but herself. This rather short, 37-minute CD, gives us ten great songs that show how clever a lyricist and songwriter, and what a charming singer she is. She touches on subjects that have been mined by songwriters before, in styles that have been around for a while including some splashes of 60s retro, but she does it with such a fresh musical personality that I would put Movie Star among the year's most outstanding singer-songwriter debut CDs, of which there have been many.

I also give this CD also a high sonic grade. The production by Johnny Pierce and the arrangements are first rate. The mix by Pierce and Jim Emrich is also very clean and free from both excessive studio effects and that annoying trendy alternative-rock grunge and use of percussion samples that has spoiled recent releases by Sheryl Crow and Suzanne Vega. The sonic clarity, including the intimate, mostly un-reverbed vocals are greatly appreciated, and the CD is also relatively free from audio compression.

With so many very worthy singer-songwriters out there, I hope that Brooke Ramel's Movie Star does not get lost in the shuffle. Her avoidance of commercial clichés that gives this CD its great charm and fresh sound is likely to work against it in the marketplace. But you can never tell. Regardless of what the music business has in store for this CD, Ms. Ramel has certainly made her mark as an outstanding talent deserving wider recognition.