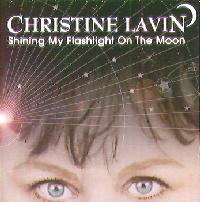 Christine Lavin: Shining My Flashlight on the Moon -- by George Graham

With all the new folk-influenced singer-songwriters appearing on the music scene over the past few years, surely one of the most charming is Christine Lavin. One of the cleverest lyricists around, she is best known for her funny songs about love affairs that end up being hilarious little dramas like Doris and Edwin, the Movie in which a worker in an office building finally meets the man of her dreams as they both fall out of a building together, or The Shopping Cart of Love, an incredibly convoluted tale of love affairs and an excessive number of items in a checkout line. But Lavin also known for some very articulate and sensitive songs, sung in a very appealing style. And then there's her stage performances, usually enhanced by a baton twirling demonstration. It’s not surprising that she has been one of the most popular artists on the so-called “new folk” scene.

Ms. Lavin has been releasing albums for a decade now, all of them featuring little masterpieces of music and wit. She has also been tireless and remarkably generous in promoting other up-and-coming artists through collaborative efforts and numerous joint concerts, plus workshops and other events she has produced that have also resulted in albums, on which she is happy to relinquish the spotlight. Now, coming just a few months after the release of one of those efforts -- a pair of CDs called Laugh Tracks, featuring humorous songs by various gathered artists -- she is out with her latest effort, her eighth nationally-distributed album under her own name, Shining My Flashlight on the Moon.

The 44-year old Ms. Lavin has been performing since the early 1970s. In her typically witty manner, she lists her first job as a receptionist/switchboard operator in a convent, which she described as being so difficult because “they all looked alike.” She cites her first paying performance in 1971, with her first album a cassette-only release coming ten years later. Since her 1985 debut national release Future Fossils, the New York-based Lavin has been attracting growing attention for her unique combination of wit and taste -- she can be hilarious but never dumb. Her witty observations always ring true, and she delivers them with generous amount of charm.

Ms. Lavin’s albums have ranged from the mostly solo to the more produced-sounding. Her last release Please Don’t Make Me Too Happy marked a trend back to a more scaled-down sound. This new album continues that welcome development and features a slightly different approach to making it -- her producer Steve Rosenthal set up a little recording studio in Ms. Lavin’s New York apartment. She writes: “I thought this would be the quickest record I’d ever make... complet[ing] it in two, three months tops, recording at home between concerts. Ha!” The project became a major undertaking with the artist given the luxury of tweaking and re-recording bits whenever she liked, and also unexpected disruptions like a neighbor’s noisy air conditioner and the family upstairs having a new baby with powerful lungs. But after those travails, the result is another gem from Ms. Lavin, consisting of songs that are all “little stories that come from real life,” as she describes them, adding “I wish I could make things up out of thin air, but I can’t.” While other musicians were added in a regular recording studio to the tracks Ms. Lavin did at home, the record is probably the most intimate-sounding non-live album she has done in a long time. For me, that’s the best way to enjoy her music, not having extra instrumentation and production interfering with her great songs and wonderful musical personality.

Once again, relationships, often rickety ones, provide the subject matter for the majority of the album, but Lavin typically includes songs about topics few other songwriters have addressed, in this case inventions desired and the planet Pluto.

The album begins with its title piece, Shining My Flashlight on the Moon, which was inspired by stopping along an unfamiliar road after getting lost at night on the way home from a performance. Unable to future out how to use the rental car’s map light, she used a flashlight then was taken with the idea of just shining her light at the moon. It’s a pretty song that reflects Ms. Lavin’s more contemplative side. <<>>

Also on the romantic side is a song called Two Americans in Paris, relating the tale of a business trip to the French capital, during which Ms. Lavin and her companion had twenty-five minutes to see the Louvre, and scrambled to see its most famous painting. <<>>

The first of the songs that could be described as classic Christine Lavin wit is, I Want to Be Lonely Again, a kind of un-love song. <<>>

Along the same lines is Happy Divorce Day, which speculates on what it would be like to have a divorce ceremony as a mirror to a wedding. <<>>

One of the highlights of Ms. Lavin’s humor is Music to Operate By, designed to be sung to a surgical team to put them into a good mood for going a proper job on the patient. <<>>

Another love song, this one about recalling the thrill of one’s first crush, has an interesting title. As a supporter of Public Radio, Ms. Lavin was participating in a membership drive, and had just sung her latest song, which had yet to be given a title, on the air. So, on an impulse, she said she would name the song after the person to phone in with the highest pledge. So it’s called Robert and Annie in Larchmont, New York. <<>>

Ms. Lavin takes on the role of would-be inventor on her song If I Ruled the World, not to be confused with the Broadway hit of the same name. She proposes seventeen inventions that would presumably make life a little better for the rest of us. <<>>

Each of Ms. Lavin’s albums usually contains one really serious or sad song. For this CD that piece is called As Bad as It Gets, which was written for a friend who suffered bad head injury in a bicycle accident, and was having a long difficult time recovering. The mood is optimistic and the happy-sounding musical setting is reminiscent of an old rock & roll ballad. <<>>

It is said that the sense of smell is the most direct route to one’s emotions. The song The Scent of Your Cologne was inspired by that phenomenon, with Ms. Lavin suddenly being reminded of her late father by a whiff of leftover fragrance in an elevator into which she had just stepped. <<>>

The album ends with its lengthiest piece, the closest thing to the little dramas for which Lavin is so well-known. The subject is astronomy for the song entitled Planet X, a tale of Pluto, and a debate among scientists, who are mentioned by name in the song, as to whether Pluto is really a genuine planet. Ms. Lavin writes that the only college course in which she ever received a “D” was astronomy, and she tries to make it up with this well-researched song. <<>> In a sadly ironic note, Pluto’s discover, Clyde Tombaugh, whose vitality Ms. Lavin celebrates in the song, died just a few weeks ago. <<>> And as an added nod to the late 1990, the song is also the first one I’ve come across that has an Internet Web page address as part of its lyrics.

Christine Lavin’s new album Shining My Flashlight on the Moon is another outstanding work by one of the, if you’ll excuse the pun, brightest lights on the singer-songwriter scene. While not as outwardly hilarious as some of her previous efforts, this is a fine collection of songs that span her range from the thoroughly witty and irreverent to the thoughtful and introspective. The musical backing is nicely understated, with most of Ms. Lavin’s own parts recorded in her apartment. The added instrumentation is spare, to allow those of us who appreciate her songs for what that are to do so without added interference or attempts to make her sound commercial. While she is best heard live, and her live album What Was I Thinking is still one of her finest, Shining My Flashlight on the Moon is sure to delight the growing number of Christine Lavin fans, and is likely to win her quite a few more.