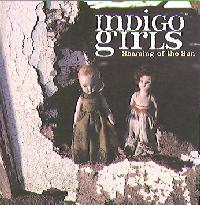 Indigo Girls: Shaming of the Sun -- by George Graham

Back in the 1980s, thanks to Suzanne Vega and Tracy Chapman there was a bit of a folk revival on the pop music scene. While there are hundreds of fine singer-songwriters at least as talented whose records have never made the charts, the folk revival did open the doors on the major label music scene for several outstanding artists including Mark Cohn, David Wilcox, who is back on an independent label, and one of the best-known, Indigo Girls.

The Atlanta-based duo of Amy Ray and Emily Saliers, who prefer not to use the definite article as part of the group name, have been together since the latter 1980s, and over the years have developed quite a following both in the US and also in England, Europe, and Australia, where there have been some different versions and some exclusive live recordings released. In the US there have been seven previous major-label releases, including two live albums. Now they are out with a CD entitled Shaming of the Sun, their first studio recording since 1994's Swamp Ophelia.

Ray and Saliers are distinctive in how well their vocal harmonies mesh, and how their songwriting styles contrast. They both write about equally as much, but Ms. Ray's material tends to be more hard-edged, while Ms. Saliers is the more mellow folkie. Their style has evolved from quite positive and almost spiritual on their early albums to a more complex, sometimes bittersweet, occasionally ambiguously poetic approach in the tradition of the great singer-songwriters of the 1960s, from whom Ray and Saliers draw inspiration. The new album continues in that direction with songs that take up, or hint at social issues, to go along with their activism for environmental, Native American and anti-bigotry causes.

From a stylistic standpoint, this is their rockiest recording yet. Peter Collins, a producer known for his work with heavy metal bands, worked with Indigo Girls on their last two studio releases, and maintained their folk roots in those recordings. Ray and Saliers thank Collins, on Shaming of the Sun, but this time around co-produced themselves with engineer David Leonard. And they are a little more wide-ranging in their sound. Some would call it adventurous, while others might call part of it more commercial. They work with some of the same musicians who appeared on Swamp Ophelia,. including bassist Sara Lee and drummer Jerry Marotta, who has been in important part of the recent Suzanne Vega CDs, and singer and multi-instrumentalist Lisa Germano. There are also some guests including Steve Earle, and members of various groups who are friends of Indigo Girls, including the bands Smoke, Big Fish Ensemble and Ulali. Ray and Saliers are playing electric guitars as almost as much on the album as their trademark acoustic guitars. Ms. Saliers is also takes up the banjo on several tracks.

The album's more electric sound is a mixed blessing. The more powerful songs can make a stronger impact, but sometimes they get a little too electric for my taste. That is compensated for, however, by the uniformly high quality of the material -- both the Ray's edgy songs and Saliers' more folky compositions are literate and melodic.

The album begins with one of Ray's songs, Shame on You, which stylistically is reminiscent of Bruce Springsteen. The lyrics revolve around a latino community, and touch on the subject of immigration. <<>>

As is the Indigo Girls custom, they follow that upbeat track with one of the more laid-back folky songs by Emily Saliers, Get Out the Map. Ms. Saliers gets out her banjo in this song of travelling and separation. <<>>

Ms. Saliers also came up with one of the more upbeat songs, It's Alright, which takes a broadside at bigotry in the course of its narrative. <<>>

A considerable stylistic departure for this folk duo comes on Amy Ray's song Shed You Skin, which starts out with a hip-hop beat... <<>> before settling into a rock groove with some bittersweet love lyrics. They add some Native-American influenced backing vocals, which on its surface is a worthwhile idea, but in this case the tend more to distract from rather than enhance the song. <<>>

One of the most mellow songs is Emily Saliers' composition called Leeds, named after the English city. Amy Ray is absent from the track, with the curious backing vocals provided by the members of Ulali. Ms. Saliers plays the piano, in this nice love song. <<>>

Indigo Girls' concern for Native Americans is reflected in the track Scooter Boys, which deals with South American natives in a very rocky context. <<>>

For me, and I suspect for many other long-time fans of Ray and Saliers, probably the highlight of the album is Everything In Its Own Time by Saliers, which reminds me of a cross between Indigo Girls and Sting, in terms of the exemplary quality of the writing and the elegant but melancholy style. <<>>

The album ends with another of its best tracks, Hey Kind Friend, a mellow song by the usually more upbeat Amy Ray. The horn section from the group Smoke, sounding like a Salvation Army band, adds an interesting touch along with pennywhistle and dulcimer. Except for mispronouncing name of the state of Washington's second largest city for the sake of a rhyme, it's a fine piece of writing obviously dedicated to someone special. <<>>

Shaming of the Sun, the new album by Indigo Girls, marks a considerable electrification of this folk-based duo's sound. Both Any Ray and Emily Saliers play electric guitars, and together with the rest of the band on the CD, can get quite rocky. Sometimes it works, but at others it can get in the way of the songs, which are some of the best Ray and Saliers have yet penned. They continue to mature as writers, creating lyrics that are sometimes powerful, and at the same time vague enough to be open for interpretation or application by the listener to his or her own situation. When they take up social issues, they do it without being preachy or self-righteous, and often that is just one facet woven into a song. Once again, their vocals, both individually and in harmony, are outstanding, though sometimes the album's production and the occasionally noisy arrangements get in the way. At other times, the addition of the dulcimer, hurdy-gurdy and other folk string instruments is handled quite creatively.

Sonically, the album is also a mixed success. The recording mix is rather good, in you can hear everything in the arrangements, but especially on the rock tracks, the acoustic instruments and vocals can sound a bit thin. And spacially, the recording tends to be rather two-dimensional and lacking in warmth or the kind of airy quality that could help the electric and acoustic instruments to blend better.

Shaming of the Sun is not the best Indigo Girls album, in my view. Outstanding material is sometimes undermined by inappropriate arrangements. But there are also many high points on this new CD. I don't think too many of their fans will be disappointed, and the album's rocky sound night open doors for new people to discover Ray and Saliers. And even when their production and arrangements get a little out of hand, Indigo Girls are still orders of magnitude above most music of the commercial pop scene.