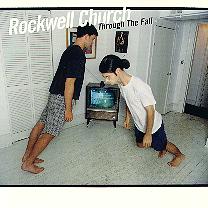 Rockwell Church: Through the Fall -- by George Graham

Over the years, folk duos have been a durable musical configuration. Pairings like Simon & Garfunkel, Brewer & Shipley, Ian & Sylvia, Batforf & Rodney, and more recent duos like Indigo Girls, The Story, Lowen & Navarro and Evon & Jaron bring a certain distinctive kind of appeal. The sound is more than just a solo folkie, but not quite a band. Strong two-part vocal harmonies are usually one of the most attractive aspects of duos. And a pair's strength in that regard is usually in proportion to the length of time they have been working together. Sibling pairings, like The Everly Brothers, the McGarrigle Sisters and Tim and Mollie O'Brien can have a certain magic. But long time partners can also bring the kind of cohesion that makes a duo great. Simon & Garfunkel and the Indigo Girls are an excellent example of people who worked together for a long time.

This week we have another first-rate duo of folkies who show their musical kinship through their long association, though they are both rather young. The Washington, DC-area pair call themselves Rockwell Church and their new album is entitled Through the Fall.

This duo have been making music together since age six. Joti Rockwell and Nathan Church Hubbard met in the first grade, where they sat next to each other. Both had already started music lessons, Rockwell on violin and Hubbard on piano. They continued their musical studies though elementary and high school, with Rockwell taking up viola and piano and playing in the high school orchestra, and Hubbard turning his attention toward songwriting, inspired by the folk music of the 1960s.

Though they went to separate colleges, Hubbard to Princeton and Rockwell to Haverford, they kept up their musical collaboration and eventually did an album on their own while still in college, produced by John Alagia and Doug Derryberry, who had worked with such artists as the Dave Matthews Band and another first-rate young folk duo, Jackopierce. Rockwell Church began to attract attention and were soon sharing stages with such performers as Marc Cohn and Taj Mahal.

Rockwell Church made their second album with the same production team last year, and released it independently before it was picked up for distribution by the Nashville-based label Compass Records, which recently released it nationwide.

While there are quite a few duos operating, the way they share their duties varies quite a bit. For example, Paul Simon wrote all the songs and played guitar with Art Garfunkel merely doing the vocal harmonies. Amy Ray and Emily Saliers of the Indigo Girls both write songs but always do it separately, and their respective songs tend to be rather different in approach. In Rockwell Church, Nathan Hubbard writes all the songs and does lead vocals along with rhythm guitar, while Joti Rockwell is the multi-instrumentalist, playing lead guitars, and a variety of other string instruments and keyboards, along with singing the vocal harmonies. What they come up with is a very attractive blend, with mainly acoustic instrumentation delivering, literate, melodic songs, mostly about love in its various manifestations, and the kind of vocal harmonies that come from having worked with each other since first grade. In short, they are just about all you would want in a folk-influenced duo.

On the album Rockwell and Hubbard are supplemented with a rhythm section on most of the tracks, which consists of drummer Timm Biery and bassist Steve Sidley. But there are a few tracks which are just the duo, sometimes enhanced with a little overdubbing. The sound is refreshingly unpretentious and thankfully avoids pop music's current disposable fads like percussion samples or distorted vocals.

The CD leads off with Better Days a good example of their well-written songs considering the often unsteady path of personal relationships. Though the song has a rock beat, the instrumentation is almost all acoustic. The track also highlights Rockwell Church's nice two-part harmonies, which still have a kind of youthful purity. <<>>

In a similar vein is First Time, another musically upbeat consideration of, in this case, the apparent start of a personal relationship. Rockwell adds a lot of nice little acoustic ingredients like mandolin, while a subtle electric guitar provides a bit of jangle. <<>>

Images of the The "Wizard of Oz" are woven into Clock Your Heels, in a clever piece of wordcraft to frame some observations about love, apparenty lost. <<>>

Rockwell Church scale back to a duo on some of the album's best tracks. Geneva is an introspective song of separation. <<>>

Also a fine example of the duo by themselves is If I Wanted with echoes of folk singer-songwriters of the past. <<>>

Perhaps the rockiest track on the album is called Curious, though the guitars remain acoustic. This musical metaphor borrowed for this song is Pandora's box. <<>>

One of my favorite sets of lyrics on Through the Fall comes on Back in Line which considers possibilities that life presents to people and how they deal with them. <<>>

Nathan Hubbard's affinity to Sixties folksingers extends to writing a song for peace. Doves Outside My Door is a lot more lack back than the typical anti-war song of thirty years ago, though the message on the pointlessness of war remains. <<>>

The album ends with an undocumented bonus track probably called Back on the Bus which takes a more lighthearted attitude about life and music. <<>>

Rockwell Church, two twenty-three year-olds from Maryland, carry on the grand tradition of folk duos with intelligent songs, excellent vocal harmonies that come from a friendship that goes back to the first grade, and attractive mostly acoustic instrumentation. While their songs may not be quite as lyrically profound as some of the singer-songwriters they look upon as their influences, their outstanding musicianship and the album's general level of good taste makes for fine listening.

In production and sound, the Through the Fall is also a class act. The instrumentation and arrangements are just right for the songs, and producers Alagia and Derryberry are not afraid to scale the instrumentation back to just the acoustic guitars and vocals when the songs call for it. Sonically the album is well-recorded in a way that enhances the mostly acoustic instrumentation, and avoids the sonic baggage of late 1990s pop, which is even afflicting some singer-songwriter records, in a way that will make this album stand the test of time and still sound good when currently trendy records become yesterday's forgotten fad. The dynamic range is fairly respectable, though the acoustic duo songs could have been allowed to ebb and flow more in volume.

While this is not their first album, Through the Fall marks an impressive national recorded debut by Rockwell Church, a pair of young guys who are the epitome of what a good folk-influenced duo should be.