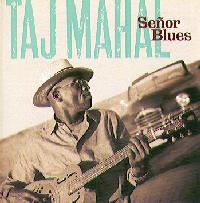 There has been a healthy revival of interest in what is now being called "American Roots Music," which includes blues, especially acoustic blues, the rhythm & blues styles that preceded rock, folk, the early varieties of rock and jazz, Western Swing, Old Time Country, and regional sounds like Cajun and Zydeco and Tex-Mex. And if there is one performer who personifies the term American Roots Music it's a man named Taj Mahal, who has just released his 36th album entitled Señor Blues.

The oldest of nine children, Taj Mahal was born in Harlem to a gospel-singing schoolteacher mother and a West-Indian born composer-arranger father who was a big jazz fan. So from his earliest days, and subsequently growing up in Springfield, Massachusetts, Taj Mahal was immersed in the music which would become his career. He writes that his father had a short-wave radio, and when young Taj was growing up, he was able to tune in to styles from all over the world. Later, his heroes would be American blues masters like Mississippi John Hurt, Sleepy John Estes, Big Mama Thornton, plus rock & roll pioneers like Bo Diddley and Chuck Berry. In his college years at the University of Massachusetts, before his graduation in 1964 with a degree in animal husbandry, Taj had an R&B band playing on campus. Then he turned professional after graduation, co-founding a group with fellow blues aficionado Ry Cooder called The Rising Sons.

By 1968, Taj Mahal released his first albums which quickly became classics, and remain to this day fondly remembered by a generation who discovered the more laid-back and rural-styles of the blues through him, providing a contrast to the electric Chicago style popularized by the British Blues bands of the day.

Over the years, Taj Mahal has never stopped -- drawing on an ever wider circle of American styles, also extending to some Caribbean influence. He has recorded or performed with everybody from Eric Clapton to Miles Davis to Bob Marley. His voluminous recorded output has also spanned a wide range of genres, and his career has also included creating music for several films, recording some children's albums, and doing some acting including voiceovers for cartoons.

After last year releasing an album of electric blues and R&B, Taj Mahal has returned to his stylistic roots on Señor Blues, and come up with one of the best recordings since his early days. It's an album that features Taj, the personification of a musical encyclopedia, working with an excellent band doing music he clearly enjoys, from country-style blues, to Memphis soul, to Motown to some straight-ahead jazz.

As usual Taj Mahal is more the collector and gatherer than the composer. But there are two original songs among the baker's dozen on Señor Blues, or three if you count one written for Señor Blues by the album's pianist Jon Cleary. Others in the fairly constant band here include Tony Braunagel on drums, Larry Fulcher on bass and Johnny Lee Schell, who used to be in Bonnie Raitt's band, on lead guitar. There are a pair of horn players who call themselves the Texicali Horns: trumpeter and trombonist Darrell Leonard and saxophonist Joe Sublett, plus an organ player Mick Weaver, and some backing vocalists. Taj Mahal himself does mainly lead vocals but also plays some Dobro and harmonica.

In addition to the original songs, Taj draws on such sources as James Brown, Otis Redding, Marvin Gaye, T-Bone Walker, jazzman Horace Silver for the title track, and even Hank Williams. While the results do vary a bit in quality, overall, Taj adds a great sense of musical authenticity and class to everything on the record.

Señor Blues begins with an updated remake of a Taj Mahal classic, Queen Bee, originally recorded in the 1970s. This time around, the folk-style blues is given a hint of a reggae beat with excellent results. <<>>

That is followed by about the biggest contrast to Queen Bee, a song recorded by James Brown called Think. Taj Mahal and band keep the funky edge, but also give it a bit of a New Orleans shuffle in places. <<>>

One of several highlights on the album is I Miss You Baby, composed by Freddie Simon and recorded by T-Bone Walker around 1953. It's a great classic slow blues with some very fine guitar by Johnny Lee Schell. <<>>

Going back even further is the song You Rascal You, which was written in 1929 and recorded by Louis Armstrong, among others. Taj and company give the song a 1940s-style R&B shuffle treatment, again with results that make it an instant classic. <<>>

The title track is one of the more surprising on the album. Even long-time Taj Mahal fans might be intrigued by Señor Blues, a classic jazz composition by pianist Horace Silver. The group serves it up with an arrangement rather similar to the Silver's original, though as a vocal. The CD's liner notes attributes the lyrics to Silver himself. But it's the first time this long-time jazz aficionado has heard the piece as anything other than an instrumental, making it doubly interesting. <<>> One departure from the original is Taj Mahal's Dobro solo. <<>>

Another of the album's unexpected delights is Mind Your Own Business. The song sounds like a great old New Orleans Dixieland novelty song, but a check of the credits shows it to be a rather obscure Hank Williams composition. The band really cooks on this one. <<>>

Taj Mahal goes Motown on the Marvin Gaye song At Last (I Found a Love), and the arrangement pretty much follows the classic Motown sound. <<>>

As close as this album comes to a disappointment -- and it doesn't get very close -- the one new original by Taj Mahal and pianist Jon Cleary, 21st Century Gypsy Singin' Lover Man. My gripe, and it's not a big one, is that for me the track seems to cross the line a bit from classic style to clichéd. <<>>

One the other hand, an old fashioned style is given real life in original composition by Cleary called Oh Lord, Things Are Gettin' Crazy Up in Here. It's a red hot gospel style song with up-to-date lyrics that Taj and band turn into the most irresistible track on this album. <<>>

The CD ends with an Otis Redding/Steve Cropper song called Mr. Pitiful, which Taj Mahal and band again serve up with authenticity. <<>>

I think Taj Mahal is one of the great treasures of American music. During a career of over thirty years and thirty-six albums, he has been a preserver and popularizer of the great American Roots Music, since long before people started calling it that. Now with the revival of interest in such sounds, it's Taj Mahal's time again. His new album Señor Blues is an eclectic but fun-filled romp through some of the styles that Taj clearly enjoys. His superb band and John Porter's tasteful, honest production adds to this album's level of class. Taj Mahal has no scruples about going between Marvin Gaye and Horace Silver, Louis Armstrong and Hank Williams, James Brown and righteous-sounding gospel, and having fun in the process. In a way this album sums up the American roots revival all on one CD.

Sonically, the album is generally well-mixed, though there are a couple of instances of too much effects on Taj's voice, and, as is so often the case, there's more compression than necessary, which robs the CD of dynamic range.