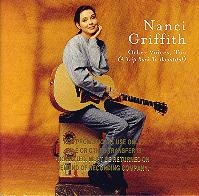 Nanci Griffith: Other Voices, Too (A Trip Back to Bountiful) -- by George Graham

The last few years have seen a proliferation of "tribute albums," records with various artists, usually songwriters themselves, doing the music of a specific composer. There has also been something of a twist on that, with well-known songwriters devoting an album of their own to the compositions of others. Elvis Costello did one a couple of years ago, and over the past quarter century, Bob Dylan has done two albums of other people's songs. One of the most celebrated albums of covers by a songwriter well-known in her own right was Other Voices | Other Rooms by Nanci Griffith, which came out in 1993. Now, five years on, and after releasing more albums of her own music, Ms. Griffith has decided to create a sequel to Other Voices | Other Rooms. It's called Other Voices, Too (A Trip Back to Bountiful).

Ms. Griffith again enlisted producer Jim Rooney who handled Other Voices | Other Rooms, and who has worked with the Texas-bred former schoolteacher since her early independent releases in the early 1980s. Last time, Ms. Griffith stated in no uncertain terms that what she was doing was an album of Folk Music. This time, the selection is more eclectic, but old folk songs, or songs from venerable folksingers still comprise the preponderance of material, with the compositions of Woody Guthrie, Ian Tyson, Guy Clark, and Pete Seeger. But, as on the last album, there is also more contemporary material by Richard Thompson, and Tom Russell, and also a new song by relatively unknown composers. But rather than purely folk, some material is included here that saw its first incarnation as country or rock & roll.

Though this is a great collection of songs, unfortunately, the large cast of characters sometimes distracts from the music. The record occasionally has the quality of an old-fashioned sing-along, where singing and having a good time takes precedence over the interpretation of the songs. I often found myself more focussed on listening to whom I could identify among the singers than to the great old songs themselves. And frankly, I have also heard better versions of a several of the songs. But overall, the album is tasteful, and especially for folk music fans of a certain age, it is great to hear some of the voices who have not been heard in the mainstream music world for a long time, like Tom Rush, Odetta, Ian Tyson and Carolyn Hester.

Ms. Griffith is joined for the most part by members of her regular group, the Blue Moon Orchestra, including keyboard man James Hooker, guitarist Doug Lancio, bassist Ron de la Vega and drummer Pat McInerney. The album was recorded mainly in Nashville, but partly in Dublin, Ireland, where Ms. Griffith spent several years and still maintains ties. A few Irish musicians make appearances, but the style does not take on a lot of Celtic influence. Interestingly, the album was recorded in 1996, but not released until now, perhaps timed to coincide with an accompanying book.

As she did on her album five years ago, Ms. Griffith invites some of the authors of the songs to appear on the record, but also as was the case on Other Voices | Other Rooms, the guests usually appear not on their own songs but on others. There are some exceptions, such as Guy Clark sharing vocals on his classic Desperadoes Waiting for a Train and Sonny Curtis of the Crickets appearing on his old classic Walk Right Back. And sometimes there is a swap, with for example Ian Tyson appearing on the song by Tom Robinson, and vice versa.

The first of this generous album's 19 tracks is a Richard Thompson song from 1982, The Wall of Death, a song about an amusement park ride as a metaphor for life. Though Richard Thompson appears on several tracks on this CD, he is not heard on this one. Instead the guest vocalist is Iain Matthews, who was briefly a part of Fairport Convention, the group that Thompson founded. The arrangement is here not very inspired, but the quality of the song itself rises to take up the slack. <<>>

Also from the Fairport Convention legacy is the late Sandy Denny's gem Who Knows Where the Time Goes, of which Judy Collins also had a famous recording back in the late 1960s. This is one of the tracks recorded in Ireland, with Dolores Keane as the guest vocalist. Ms. Griffith and company give the arrangement a bit of a country twang. <<>>

A song that is a kind of anthem for Texas singer-songwriters is also included. Desperadoes Waiting for a Train was written by Guy Clark but made into a hit by Jerry Jeff Walker. Both appear on the track along with Steve Earle, Rodney Crowell and Jimmy Dale Gilmore. Ms. Griffith almost gets lost in the shuffle. Interestingly, this is one of the tracks on which Richard Thompson appears. <<>>

Canadian Whiskey is the converse to Summer Wages. Written by Russell, it features Tyson. This is definitely one of the standout tracks on the record for its very tasteful performance. <<>>

As was the case on Ms. Griffith's Other Voices | Other Rooms five years ago, one of the album's most memorable tracks is the performance of a new song by a relatively unknown songwriter, or in this case, two. Dress of Laces by John Grimaudo and Saylor White is an excellent piece of writing, and features a fine performance by Ms. Griffith and her band, with a guest vocal by Lyle Lovett. <<>>

As mentioned, the album can sometime resemble an old fashioned folk hootenanny. The traditional song He Was A Friend of Mine is based on an old recording by Dave Van Ronk and Eric Von Schmidt. Both appear on the track along with Odetta, Rosalie Sorrels, Jean Ritchie and more contemporary figures like Eric Taylor and Lucy Kaplansky. It's interesting hearing all these people together, but in the end it doesn't really raise the level of the song. <<>>

Tom Rush appears on another traditional song, one which Rush recorded many years ago, Wasn't That a Mighty Storm. Again it's a big all-star folk sing-along with Rush, Emmylou Harris, Carolyn Hester, Odetta and John Hartford's son Jamie Hartford appearing. <<>>

Perhaps the most striking piece on the album is devoid of all the guest stars. Darcy Farrow, a 1965 song by Steve Gillette and Tom Campbell just features Ms. Griffith accompanied by Pat McInerney's percussion. <<>>

Other highlights include a fine version of Stephen Foster's 19th Century American classic Hard Times Come Again No More recorded in Ireland <<>> and Woody Guthrie's Deportees with Lucinda Williams, Tish Hinjosa and many others. <<>>

The album ends with another of those folk sing-along songs from the 1950s and Sixties, If I had a Hammer, by Pete Seeger and Lee Hayes of the Weavers band from the 1950s. Eric Weissberg, known for playing his banjo on the 1970s film Deliverance appears, as does Richard Thompson, who is a curious choice. Among the folk veterans appearing are Odetta, Jean Ritchie, Rosalie Sorrels, plus Lucy Kaplansky, Eric Taylor, and up-and-coming songwriter Gillian Welch. The arrangement almost seems a bit too lighthearted. <<>>

Nanci Griffith's new album Other Voices, Too (A Trip Back to Bountiful) is a mixed success. For sheer quantity of notable cameo appearances from the world of folk and country, the album is quite impressive. The selection of material is also noteworthy, comprising an interesting cross-section of music from Stephen Foster to a new song. But the project seems to me to have gotten out of hand a bit. Instead of loving tributes to some of Ms. Griffith's favorite songwriters and songs, it has become a big parade of different famous voices. And sometimes the arrangements suffer as a result, with these fine songs taking a backseat to the cast of characters. Keeping the musicians' roster in check I think would have made for a better record, with Ms. Griffith and her excellent band having more of a chance to provide worthwhile interpretations of the songs. But "cast of thousands" not withstanding, the result is still reasonably tasteful and occasionally brilliant.

Sonically the album is competent but not very impressive. It sounds as if some of the guest vocalists were recorded separately which detracts a bit from the album's cohesiveness. And though it might have been used to even out the varied elements of the record, audio compression in the mastering process robbed the album of some of its life and clarity.

Nanci Griffith's Other Voices, Too (A Trip Back to Bountiful) is certainly an ambitious record, and as well-liked as she is she probably had more offers of help on the record than she could use. Still, making this a more modest effort, like her previous collection of covers Other Voices | Other Rooms I think would have made for an album with more staying power, a record you would want to come back and enjoy after the novelty of all the guest star appearances wears off.