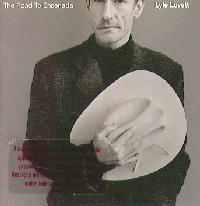 Lyle Lovett: The Road to Ensenada -- by George Graham

I think it's safe to say that there are not too many people out there quite like Lyle Lovett. One of the most creative singer-songwriters on the scene, he's a Texan through and through, embracing country music, but is about as musically eclectic an artist as you will find. He's an engaging singer with a distinctive voice and a gifted lyricist, but he nevertheless writes some songs that can only be described as having downright weird words. After being a confirmed bachelor well into his 30s, Lovett suddenly married movie star Julia Roberts. After being pretty much the domain of Public Radio, he found himself plastered on the front pages of the supermarket tabloids and trash TV shows. Lovett also acted in a few films himself.

After creating a series of outstanding albums with an often jazzy group he called his Large Band, in October 1994, Lovett released I Love Everybody, a collection of older songs he had lying around since as long ago as the 1970s, performed with scaled back arrangements. They included a few pieces with some of the most eccentric lyrics of his career. That album was released during his happy marriage to Ms. Roberts, and many of Lovett's fans were wondering if there was anything autobiographical to be heard the record. But Lovett stressed that all the songs pre-dated his engagement and marriage.

Well, Lovett and Roberts have separated, and thus the tabloids have lost interested in the songwriter. Now he is out a collection of new songs called The Road to Ensenada, which shows him up to his old tricks again -- creating songs that make you wonder what goes through his mind, -- if you take the time to listen carefully to the lyrics. Also as usual, musically, the album is very tastefully done, running from twangy country to jazzy, with some introspective folkie-type songs in there as well.

Texas has a rich tradition of singer-songwriters, going back to people like Jerry Jeff Walker, Townes Van Zandt, Guy Clarke and scores of fine current-day artists. Lovett grew up on their music listening them in folk clubs in college as he studied journalism. He made an interesting admission in an interview a couple of years ago -- that while he was familiar with many of Bob Dylan's songs, he had never actually listened to an entire Dylan album straight through. I think that serves to illuminate Lovett's penchant for creating his own world, paying little attention to styles and trends around him.

His record-company described The Road to Ensenada, Lovett's sixth album, as being the his most "radio-friendly to date." Radio-friendly, of course, is a euphemism for lowering standards enough to be played on commercial radio. Lovett has had a couple of songs that found their way onto commercial country radio, but for the most part Public Radio has been the territory of Lovett's music. The new album does have perhaps two tracks that one could imagine being played on the commercial airwaves -- one more or less straight country tune, such as he has done in the past, and a song likely to find a place on the contemporary country stations. Both have lyrics that are mostly harmless, and tunes you can go around humming. But those concessions having been made, Lovett is up to his usual tricks, with odd characters, unsuccessful attempts at starting love affairs, some odes to things Texan, and one song that could be interpreted as being about his relationship to Roberts. The arrangements range from Nashville-style with a weeping steel guitar, to bossa nova, to rollicking Western Swing, to introspective folkie-style. But except for horns on the Western Swing song, I miss the presence of Lovett's Large Band. This time, he enlists some well-known musical figures to join him in background vocals, including Jackson Browne, Shawn Colvin, and another eccentric in his own right Randy Newman.

The Road to Ensenada has a lot in common with I Love Everybody, with the same co-producer with Lovett, Billy Williams, recorded in the same Los Angeles studio with the same drummer, Russ Kunkel, and pianist, Matt Rollings, who has been on most of Lovett's albums. Rollings, unfortunately, is not featured quite as often this time. The bassist is Leland Sklar, who together with Kunkel were a staple of Jackson Browne, Linda Ronstadt and James Taylor albums during the 1970s. The backing musician who really distinguishes himself this time around is violinist Stuart Duncan, a figure from the bluegrass and New Acoustic scene.

The album begins with the kind of song only Lyle Lovett could write, Don't Touch My Hat, in which the protagonist is very protective of his Texas-style headgear. Actually, the song shares a premise with the old Carl Perkins rock classic, Blue Suede Shoes, but Lovett gives it his own twist. Naturally song is given a bit of a country twang. <<>>

Released as the album's first single is a track called Private Conversation, which as far as I am concerned, is the closest thing to a throwaway on the album. I guess it was Lovett's attempt at a pop song. He puts away his musical eclecticism and lyrical idiosyncrasies. <<>>

On the other hand, Her First Mistake, is pure Lovett. The arrangement takes a detour to bossa nova territory, while the lyrics are a typically complicated tale of a guy's almost complete failure in trying to hit it off with a girl. <<>> By the end of the song, the tables might be turning. <<>>

Another song that might be considered classic country in style is I Can't Love You Anymore. It's got all the ingredients, including the melancholy steel guitar, and lyrics about breaking up. Though the song might end up on the commercial airwaves, Lovett brings a more literate approach to the song than is the norm for the genre. <<>>

Almost the opposite approach is Promises, done mainly in a solo setting. The vague, regretful lyrics, and the almost spacey musical mood give the song a somewhat unsettling quality. <<>>

Lovett comes up with another of his oddball characters in a song called Fiona. It's one his creations that combines a lively tune, in this case featuring background vocals from Jackson Browne and Shawn Colvin, with lyrics that are a long way from the usual stuff of pop music. <<>>

There are two songs whose main subject is the Lone Star State. One is the only non-Lovett original. The 1987 tune by Henry Strzelecky is called Long Tall Texan. Lyrically on paper, it's a kind of stereotyped old fashioned cowboy song. But it comes off as oddly cynical when Randy Newman's jaundiced vocal makes its appearance. It's the sort of thing you don't quite know what to make of. <<>>

Also on the subject of Lovett's home state is my pick for best track on the album, That's Right (You're Not from Texas). It's done as a great Western Swing arrangement with the song alternating between slower verses and hard swinging choruses, complete with horn section. The lyrics contain a line referring to Uncle Walt, who is Walter Hyatt, Lovett's friend and fellow Texas singer-songwriter who was killed in the ValuJet crash in Florida in May. <<>> The African-American gospel-style background singers who provided a very distinctive presence on Lovett's albums going back to his first Large Band album, again make an appearance on this tune, adding an unexpected but very musically compatible twist. <<>>

The album ends with a song that's not listed on the outside of the CD case. If you unfold the booklet, you'll find lyrics to a track called The Girl in the Corner. While some of Lovett's songs are in part autobiographical, he often takes liberties with the facts and characters. The way he tried to hide this song, including putting a full minute and a half of silence before it, leads me to believe it might have something to do with his affair with Julia Roberts, or at least the beginning of it. It has a telling line in the refrain, "And the rest, they say, is history." <<>>

Lyle Lovett has come up with another mostly brilliant album in The Road to Ensenada. The lyrics may not be quite as weird as on his last album I Love Everybody, or the arrangements as eclectic or jazzy as on Joshua Judges Ruth, which I still consider the high point of his career. But Lyle Lovett is one of a kind, and the combination of his highly original songwriting style, his appealing vocals, with his easy-going and engaging musical personality makes him one of the most significant creative figures on the singer-songwriter and country music scenes. There are few people who can slip between upbeat Western Swing and moody songs of regret, between twangy cry-in-your-beer country and bossa nova, between elaborate story-songs like the title track, and novelty lyrics like Don't Touch My Hat with Lovett's unpretentious ease.

From a sonic standpoint, Lovett again keeps his standards very high. Engineer Nathaniel Kunkel, who also mixed I Love Everybody, actually adds a little subtle reverb to Lovett's vocal, after several albums with Lovett's voice almost completely without any electronic effects. That seems another element in this album's attempt to reach wider audiences. But the sound is still first-rate, with great clarity and decent dynamic range.

Many may have gotten to know Lyle Lovett as Julia Roberts' funny-looking ex-husband, but for over a decade his records have been winning fans among a rather diverse audience from country music aficionados to connoisseurs of literate singer-songwriters. This new album is likely increase his audience. While some of his long-time fans might consider parts of The Road to Ensenada a bit of a commercial compromise, I think very few will be disappointed in the overall result.