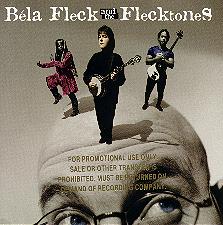 Béla Fleck and the Flecktones: Left of Cool -- by George Graham

I find it both amusing and a source of fascination that one of the most creative musicians and composers today in almost any kind of music happens to be a banjo player. The banjo is usually looked down upon as not being very expressive, and tends to be limited to bluegrass and old Dixieland jazz. But, though it's now a cliché to say this about him, Béla Fleck has boldly taken the banjo where none has gone before. After growing up in New York -- not exactly a banjo town -- and attending the famous High School of the Performing Arts, Fleck was soon attracting attention in the bluegrass world as a teenaged prodigy. His musical direction was soon established when on his first album, recorded at age 21, he included a remarkable version of Chick Corea's latin jazz fusion classic Spain. Fleck has maintained that eclecticism ever since, and indeed has revelled in it, always seeming to be thoroughly enjoying himself creating some amazingly original music.

Fleck spent the better part of a decade with New Grass Revival, one of the premier groups in the so-called "New Acoustic" music scene, taking the instrumentation of bluegrass and doing everything from swing to reggae.

In the late 1980s, through some rather unusual circumstances, Fleck formed a band called the Flecktones, with two African-American brothers from Virginia, one of whom, bassist Victor Wooten, auditioned for Fleck over the phone by playing banjo parts on his bass. His brother Roy "Future Man" Wooten brought along a very strange instrument, a Synthaxe Drumitar, which is a guitar-like synthesizer controller connected to the sound-generation circuitry of a drum machine, so he plays the drums by tapping buttons and playing the strings of what looks like a mutant guitar. The original personnel also included a similarly iconoclastic harmonica player, Howard Levy, who managed to get just about every note of the scale out of his normally limited diatonic harmonica.

The fact that the Flecktones played instrumental music and improvised meant that people and record stores put them in the jazz department, but while their music occasionally did show some jazz influence, the Flecktones, over a series of albums created music that simply could not be readily categorized, it ranged from funk to bluegrass to bluesy to Celtic in influence.

It has been five years since the last regular Flecktones studio album, but Fleck has been keeping busy, doing his usual share of studio work in Nashville, producing albums for others, and releasing two exceptional records of his own: Tales from the Acoustic Planet appeared 1995 and put Fleck back in a more acoustic setting but with an even wider stylistic range, featuring guest artists ranging from Chick Corea to Bruce Hornsby to Branford Marsalis. In 1996, Béla Fleck and the Flecktones released Live Art, another ground-breaking record, a double CD of live music by the group with various guests. There were some very impressive performances, and once again stylistic boudaries were happily trampled upon with, for example, jazz pianist Chick Corea guesting on a bluegrass tune.

Because years have elapsed since the last Flecktones studio album, an artist as restless as Fleck was bound to have cooked up something new in the interim, and indeed that is what has happened on the new release entitled Left of Cool. The group has added a member, Nashville-based multi-reed player Jeff Coffin, and they also added some vocals. The former addition might have been expected. The Live Art and Tales from the Acoustic Planet CDs both featured saxophonist Paul McCandless prominently. McCandless is a member of the long-running and also very eclectic quartet Oregon, and remains with that group. So Fleck and the Wooten Brothers recruited another saxophonist, the 32-year-old Texas-native Coffin has been living in Nashville since 1991, and has done a lot of studio work, recording or performing live with such artists as the Dave Matthews Band, Bruce Springsteen, Don Henley, Van Morrison, Bruce Hornsby, and Phish. Coffin has also released his own jazz CD.

The other innovation on Left of Cool is the presence of the vocals, which for long-time fans of the Flecktones like me, elicited a pronounced groan when the news came out that there was going to be singing on the record by the group members. There have been a couple of appealing and articulate raps on previous Flecktones projects, but turning this group into another pop band seemed like a very bad idea. But as soon as one hears the record, such fears are allayed. Roy "Future Man" Wooten is not a bad singer, and the vocals are so few and far between on this generous CD, and the tunes are so thoroughly interesting that the generally-forgettable lyrics can be ignored.

By the way, this is indeed a generous CD, it runs two-and-a-half minutes longer than is supposed to be physically possible to fit on a CD, 76 1/2 minutes, and that allows ample time for the Flecktones to break down stylistic barriers with their usual joyful abandon. One of the most appealing things about the Flecktones is that while their music is often mindbogglingly complex compositionally and virtuosic instrumentally, they are obviously having a lot of fun doing what they do, and that musical joie de vivre is infectious, even in a studio recording situation.

The recording's setting is interesting. They made the CD in Fleck's home studio using computer-hard disk recording techniques and new 20-bit digital recorders, which, given the state of technology are now cheaper than traditional recording studio gear. And for the first time, they use overdubbing -- previous albums have been planned to be just as the band performs live

Opening is a piece that is fairly typical -- if there is such a thing -- of Flecktones music. Throwdown at the Hoedown, spotlights Fleck's writing of musically intricate pieces in complicated time-signatures, while Victor Wooten can't resist some virtuosity on his bass in the context this funky tune. Jeff Coffin's tenor sax fits right into the groove. <<>>

The first of the vocals is Communication, Future Man sings, with Dave Matthews doing a guest backup vocal. As remarkable a composer as Fleck is, his lyrics needn't cause Bob Dylan to lose sleep. There are tasteful, but much more interesting is what is happening musically. The tune has the convoluted structure and arrangement of an Art Rock piece with sections alternately sounding like reggae, Middle Eastern, and funky, which seems somehow to be at odds with Jeff Coffin's happy-sounding soprano sax. <<>>

Another vocal that is anything but a pop tune is Let Me Be the One. Again the lyrics are a bit of a throwaway, but the mutant funky arrangement with banjo is the sort of thing only the Flecktones could pull off. <<>>

Béla Fleck has always been attracted to Irish and Celtic music. Most of his earlier acoustic albums had at least one Irish tune, and one can hear such influence on previous Flecktones recordings. Left of Cool contains a piece called Trane to Conamorra, in which "Trane" spelled like John Coltrane's nickname. It's a jazz waltz that evolves into an airy jig. The result is quite wonderful. <<>>

Three pieces on the CD show some Middle Eastern influence. In 1996, ago Fleck did a record with some Indian musicians. Oddity is rather like its title suggests, alternating an Eastern tonality with an almost classical quality... <<>> before Coffin comes in with a rather frenetic soprano sax solo that goes off in a yet another direction. <<>>

Also looking Eastward is Sojourn of Arjuna in which Future Man paraphrases the Bhagavad Gita text of Hinduism, in the context of an instrumental setting that ranges from jazzy to Celtic.. <<>> while the track Shanti features Fleck playing a hybrid sitar-banjo instrument. <<>>

The album's show piece for instrumental prowess is The Big Blink on which Fleck again shows his Chick Corea influence. The piece is high-energy fusion, though on banjo. <<>> Béla also shows a little flamenco influence on his instrument. <<>>

The album ends with perhaps its most unexpected piece, Prelude to Silence is seemingly mostly improvisational and woven around field recordings from Africa. <<>>

Béla Fleck and the Flecktones new CD Left of Cool marks yet another fascinating record from this evolving group whose music gives new definition to the word eclectic. Based around a banjo, with influences that run from Middle Eastern to Celtic to jazz to Spanish, the Flecktones sound like no one else on the planet. They can get away with what they do since they are astonishingly good musicians, Fleck is a composer among the best in almost any genre of contemporary music, and their difficult and complex music is pervaded by a sense of good fun and high spirits that is very infectious.

The addition of saxophonist Jeff Coffin and the vocals by the group represents yet another new turn by this always-restless ensemble, and for the most part, they are very good additions. Coffin is up to the level of Fleck and the Wooten Brothers, and his arsenal of instruments adds much to the already rather wide range of sonic colors within the band.

The spirit of good fun also pervades the production and sound of this CD. The fact that it was a home recording, on albeit state-of-the-art digital equipment, probably added to the informal nature of the recording. The mix also reflects some of that attitude, with some old-fashioned 1960s-style ping-pong stereo panning happening, and lots of little comments and other sonic bits buried in the mix, rewarding headphone listening. Also, in 1960s style, several of the tracks overlap into each other to make a more or less continuous sweep of music. The sonic quality of the recording is also first-rate, with very good dynamic range for a major-label album. Roger Nichols, who engineered many of Steely Dan's records was co-engineer with Fleck and the band's regular sound man Richard Battaglia.

Béla Fleck and the Flecktones, on their new album Left of Cool have one again made some amazing music that utterly frustrates anybody trying to put it in any neat pigeonholes, and does it with a banjo as lead instrument.