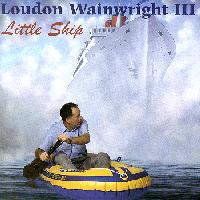 Some performers do their best work in the studio, while others are at their peak live. Loudon Wainwright III is definitely one whose music comes across best in a live setting. The veteran folkie whose career goes back to a debut album in 1970, has just released his sixteenth recording entitled Little Ship, and though it wasn't exactly recorded in the studio, it bears the hallmarks of Wainwright's studio work.

Wainwright emerged during the era of the Sixties singer-songwriter, but with his own thoroughly distinctive style, often incorporating an eccentric wit into his work. His one commercial hit was Dead Skunk from his third album in 1972. Since then, he has been continuing making his highly individual brand of music, usually working his own experiences, some quite personal, into his songs and often making wider observations on the world through them. He spent some time living in England and collaborating with Richard Thompson when he found the musical climate there better, but has been based in New York for the past several years. Though Wainwright has a devoted following, his recorded output has been a bit uneven over the years, and it often had to do with who produced his records, or under what circumstances they were recorded. One of his best CDs in recent years was the live recording Career Moves released in 1993. Following that was one of his better studio albums Grown Man in 1996, produced by Jeffrey Lesser.

Now comes Little Ship, produced by John Leventhal, who has worked with Shawn Colvin, Marc Cohn and Rosanne Cash among others. But to take some of the studio aspect out of the process, it was made in Leventhal's apartment in New York's East Village. Wainwright points out that they had to work around the heavy-footed people in the apartment upstairs, whom they called the Clomp Brothers. Still, the album lacks some of the spontaneous feel that marked Wainwright's last studio release, and it is nowhere near as entertaining as Wainwright's live recordings. The lyrical themes are also considerably less exuberant. Wainwright was in love around the time of his last album. He had broken up when he was writing this one, and a lot of the songs are about separation and family troubles, a theme around which he has often woven songs. So the album comes off as a bit of a downer, even though Wainwright often tries to poke fun at his situations. Leventhal's production, while quite tasteful in instrumentation, makes Wainwright come across as a bit stiff. On some of his studio albums, the production detracts from the songs. Little Ship does not go that far, but Wainwright's musical personality is somewhat restrained, and with all the sad songs, the result is hardly Wainwright's crown jewel. It still is a very good album as singer-songwriter records go, and if this had been Wainwright's first, it would have been an impressive debut. But given the artist's long, illustrious track record, Little Ship is probably not going to be considered Wainwright's magnum opus.

There are different backing musicians from recent Wainwright records. Producer Leventhal is heard on lots of different instruments including guitars, keyboards, bass and even drums. Also appearing are bassist Tony Garnier, and drummer Shawn Pelton. Making a guest appearance is Shawn Colvin, who does background vocals on two songs. Colvin and Wainwright had worked together on a Richard Thompson tribute album, and their paths have often crossed. Together the backing musicians perform generally understated arrangements, though they also can rock out from time to time.

The first of the album's fifteen tracks is one of its rockers, Breakfast in Bed, which is not exactly about food. Wainwright's reputation for pulling no punches in his lyrics is preserved. <<>>

More laid back is O.G.M., which presumably stands for "outgoing message," a song about answering machines and the breakup of a relationship. It's one of the album's highlights from Wainwright's distinctive lyrical style to the tastefully restrained backing. <<>>

A track rather typical of the style of this album is Our Own War, another song about the breakup of a relationship. Shawn Colvin does the backing vocal, while the accompaniment tends toward the country with its steel guitar. <<>>

Wainwright, with his own fractured marriages, has often written about family situations that arise from such circumstances. What Are Families For? is not specifically about divorced families, but deals with the inevitable rough spots that arise. It's also one of the album's best pieces of writing. <<>>

Examining the family from another viewpoint is Bein' a Dad, one of the tracks on which Wainwright's well-known wit flourishes. <<>>

The songwriter gets rather sardonic on a short piece called The World, which he performs on banjo. Wainwright writes, "The banjo is supposed to be such an optimistic, happy instrument, and I set out to write the most pessimistic song I could." The result is fun, if you can appreciate Wainwright's trademark sense of irony. <<>>

One song that is not based on his personal life is Primrose Hill, written about a homeless person on London. <<>>

As a Baby Boomer reaching middle age, Loudon Wainwright in recent times has written several songs about the passage of time. One of his better ones on the subject is The Birthday Present II. <<>>

One of the best of the rocky tracks is I Can't Stand Myself, again going back to the breakup of his love affair, and turning his attention to trying to find another relationship. <<>>

The album ends with one of its funniest compositions. It's entitled simply A Song, and its premise is a jaundiced look at the songwriting process, making a song out of a lack of ideas. <<>>

Loudon Wainwright's new release Little Ship features some fine new songs, but it's hardly his best album. The often quirky singer-songwriter is in his element live, where he has can really put himself into his often humorous and ironic songs. By contrast, he sounds a bit stiff on Little Ship as he has on several of his studio recordings, despite the generally tasteful accompaniment here. His well-known wit is rather restrained, and the album also suffers from too many songs about broken relationships that come across in a sour mood. Still, his observations are often acute in typically Wainwrightian fashion.

Despite much of the recording having taken place in a noisy New York apartment, the sound quality is respectable, and the mix is nicely done, with a generally understated sound, but also a few little sonic surprises. The dynamic range is decent, as well.

Those who have never heard this veteran singer-songwriter might well be taken by this album's quality of writing, tasteful accompaniment and occasional wit. Bit I suspect that long-time fans of Loudon Wainwright III are likely to wish for live versions of these songs.