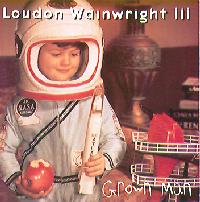 Nineteen Ninety Six marks the year the first of the official Baby Boomers turn fifty, and no doubt a lot will be said about that as time goes on. Of course, quite a few of the seminal musical figures from the 1960s have already passed the half-century mark, but now it's the actual Baby Boomers' turn. And that seems to be the theme behind the new album by singer-songwriter and slightly idiosyncratic wit Loudon Wainwright III for his new album Grown Man.

Wainwright, the son of a famous World War Two-era writer made his first album in 1970, showing what would become his musical persona: a folkie with a strange way of looking at the world, and an engaging and slightly goofy stage presence. He might have been just another long-forgotten postscript to the end of the Sixties folk era had it not been for a very unlikely hit song he penned in 1972: Dead Skunk, which though not out of character for Wainwright, became a best-selling record back when cute novelty songs still had a chance on the pop charts.

In the ensuing two-dozen years, Wainwright's career has had its ups and downs. He became a fixture on the folk festival and coffeehouse circuit, and appeared on three episodes of the TV series M*A*S*H. After his career further flagged a bit, he moved to England, where he became fast friends with Fairport Convention founder Richard Thompson, who worked with him on a couple of albums that were nominated for Grammys during the mid 1980s. He recorded for the independent folk label Rounder Records during that period, where his music was right at home, but didn't have the distribution potential he had in his major label days. In recent years, Wainwright had been turning up on offshoots of the large record companies and doing work of mixed quality -- occasionally bowing to the temptation to add more commercial elements to his sound -- as if Wainwright could ever be commercial -- and at other times doing some brilliant work such as on his solo live album Career Moves from 1993.

Now he is out with Grown Man, his 15th release, which turns out to be his best studio effort in several years, and is also his most consistently worthy set of new songs in just as long. Once again, listeners are treated to a generous helping of the Wainwrightian point of view, this time from the perspective of impending middle age.

The producer was Jeffrey Lesser, who developed a reputation for recording jazz and pop records live with no overdubbing or remixing, going back to the days of direct-to-disc LPs in the late 1970s. In recent years, he has produced the Chieftains' Long Black Veil, as well as albums by the Roches and Wainwright's last two CDs. Grown Man involves more conventional multi-track pop recording technique, but Lesser does use a fairly minimalist approach to added instrumentation and sonic elements. Sometimes, Wainwright is just heard with his guitar, while at others the accompaniment is kept subtle. Among the backing musicians is Wainwright's long time associate Chaim Tannenbaum, plus David Mansfield on various string instruments, Randy Landau on acoustic bass, and drummer Richard Crooks who played on Dead Skunk. Making a cameo appearance is Wainwright's 19-year-old daughter Martha, who sings a musical dialogue with her Dad.

Wainwright has a reputation for writing songs that are autobiographical, and this album continues the trend, from looking at middle age, to considering love affairs, divorce and the kids. Like the best autobiographical songwriters, Wainwright can take the incidents in his life and turn them into universal observations, but sometimes he can just make an odd personal experience funny or interesting.

The album's tone of facing middle age is set up the opening track The Birthday Present, which was actually recorded in the shower. Wainwright claims he was in the buff. His 48th birthday provided the inspiration for the set of observations. <<>>

More conventional is the title track Grown Man, Wainwright writes "is basically a plea to stand by your man, even though it's a waste of time because he's a complete jerk." That provides a nice segue from the opening piece lyrically, while putting Wainwright into his less idiosyncratic mode. <<>>

Wainwright at his lyrical best comes out on That Hospital, in which he reflects on the beginning, end, and milestones of life. The hospital that inspired the song is located in Mt. Kisco, New York, where he grew up with his family. <<>>

Wainwright's broken marriages and their effects on his children have provided the grist for several songs. Grown Man features two. The first is called A Year. <<>>

That is immediately followed by Father/Daughter Dialogue, which features Wainwright's daughter Martha. Actually the dialogue is about Wainwright's previous songs about divorce and family breakup. <<>>

Like all good folksingers, Wainwright is occasionally inspired to write a song about the news of the day. Reading an article about the so-called "fat gene" scientists have discovered, LW3 addresses the subject of genetic engineering in a happy-go-lucky sounding song that takes an ominous view of genetic engineering. He calls the cong 1994. <<>>

Also based on a news account was a delightful solo performance called Human Cannonball. The CD booklet contains a copy of the New York Times obituary of Emmanuel Zacchini, Sr., who originated the circus act of being shot from a cannon. <<>>

Another highlight of the album is a tune that shows Wainwright to be developing into a bit of a curmudgeon. Cobwebs was inspired by the overuse of the word "like." <<>>

It wouldn't be a Loudon Wainwright III album without one genuinely weird song. Grown Man contains IWIWAL, which was released as the first single, and is sure to raise some eyebrows, even in these days of trash talk shows on commercial television. The musical transition between the beatnik inspired introduction and the Nashville flavored body of the song makes it all the more interesting. <<>>

The album ends with its only cover song, an old Jimmy Rodgers standard Treasure Untold, that was popular in the Sixties folk days. It's done complete with some yodelling. <<>>

Loudon Wainwright's new album Grown Man which had already been released in Europe in the fall, is one of his best studio recordings in recent years. Wainwright is at his best in a live setting, but this is an excellent batch of new songs -- 14 of them plus the Jimmy Rodgers cover -- and the fairly unobtrusive production lets the listener concentrate on what he is saying. Some of his personality also comes across as well, which has not always happened in the past. The result is a enjoyable album sure to please Wainwright's long-time fans and maybe even win him a few new ones, though he is still unlikely to co-opt, say, Pearl Jam's audience.

Sonically the album is nicely done -- I have no complaints with Jeffrey Lesser's work as producer and engineer. The production is tasteful and generally understated, and the mix clean and relatively uncompressed. Even the shower recording is respectable.

Grown Man may not be the very best album of Wainwright's 26-year recording career, but I would put it among his top five.