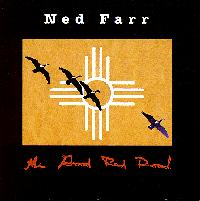 Achieving fame in the music business requires two things: first a degree of musical ability, and judging from some of the music at the top of the charts, it doesn't have to be very much musical ability. But perhaps more important, is a sense of drive and ambition to get one's music in front of the public. Sometimes I wonder how many thousands of really fine musicians and composers all over the country keep their music to themselves or their friends and family while going through life doing something else as a main occupation. The Homegrown Music series here at WVIA has introduced me to scores of exceptionally fine artists who have never been signed to a record label, or even perform in public very often. One wonders what kind of music we might be missing from artists who just may not be self-promoters.

All this is brought to mind by this week's CD, a brilliant debut record by a New York based singer-songwriter who, after making the album independently on his own, has let most of the copies sit in his apartment for three years, and not gone through the rigors of trying to promote the record to a national audience through the media... that is until now. The CD is The Good Red Road by Ned Farr.

Ned Farr grew up in Westchester, Long Island, and in New Mexico. He started writing songs at age eleven, and has performed fairly regularly at folk venues in New York and also appeared before audiences in Scandinavia. One of his big gigs was at an Amnesty International Human Rights Day concert along with Richie Havens, and Philip Glass. But Farr's working career has been in the film business. He attended film school and has worked as a chief electrician on movie sets, but is currently working as a graphic artist and art director.

Though he has been writing for a long time, Farr calls his songs on The Good Red Road more recent in vintage, and some are quite personal and autobiographical, inspired by a difficult period in his life. He describes the album as "a collection of songs about the legacy of an American family," with the story being told from different points of view. And most of the songs are rather sad, about the breakup of a family and the sense of loss that creates, and ultimately coming to terms with it.

Such lyrical themes might seem the fodder for Nashville country, but Farr puts them into a strikingly evocative, ruminating musical setting with a melancholy electric violin, understated and sensitive guitar work and a wonderful sense of dynamics in the arrangements which provide the setting for Farr's introspective vocals which remind me of English singer David Sylvian in a higher register.

The title of the album is a reference to a Lokota Indian expression, taking "the red road" meaning to live life in harmony with the world. And that provides a hint of the lyrical direction of the album, with its recurring theme of coming to terms with a family torn asunder. Joining Farr on this CD is electric guitarist Jim Olbreys, a graduate of the New England Conservatory of Music; Jon Ossman on bass, who was a former member of a band called The Test Tube Babies and also toured Europe with Richard Lloyd of the innovative new wave group Television; and drummer Joe Casalino who teaches percussion and has played with Human Factor and Kiss member Ace Frehley. The most distinctive instrumental sound on The Good Red Road comes from violinist Cenovia Cummins a classically trained player who has performed with people ranging from the Smashing Pumpkins to Indigo Girls.

Together they create memorable music that is difficult to categorize but both appealing and often striking in sound: at times ethereal, at others quite electric and at yet others almost a jazz-classical blend with the violin providing hints of both genres.

The album gets under way with Kiva, Pueblo Indian term for a sacred ceremonial chamber. The kiva provides a metaphor for the venue for the convening of a family to talk things over. <<>>

That is followed by Burden, a consideration of the breakup of a marriage. Farr's articulate lyrics mesh with the instrumental setting which ranges from sparse to soaring with Ms. Cummins' electric fiddle. <<>>

More upbeat musically, but still rather melancholy in lyrical mood is Geese, ruminating more about the dissolution of the relationship. <<>>

Written from her point of view is Saturn, which is appropriately saturnine in musical outlook. <<>>

The most energetic track on the CD is My Unusual Day, a song which was used in a film called "When It Was Over." Again, the theme is one's life seemingly falling apart, though there is a sense of trying to cope. <<>>

My favorite track is the title song The Good Red Road, seemingly about a journey into the places of one's past, but as the expression goes, you can't go home again. The instrumental setting is an excellent example of what makes this album so appealing. <<>>

After a short electric reprise of Kiva, called Kiva II, the album ends with The Railman's Son, whose main character seems to be an analogy for restlessness, while the lyrics imply a resolution, or least a level of acceptance of the relationships torn apart elsewhere on the album. <<>>

Ned Farr's debut CD The Good Red Road is one of those fascinating records that takes reasonably familiar ingredients and puts them together in a very intriguing way to make music that is quite remarkable. The lyrics, which are often quite sad, never come off as maudlin, while the musical arrangements that are at times almost gossamer-like in their airy, introspective quality, are nevertheless full of musical interest and first-rate musicianship. Cenovia Cummins' violin, in the context of the frequently sparse accompaniment, makes for a sound that instantly draws in the listener. The group also makes effective use of dynamics to create an ebb and flow that prevents the music from getting stuck in any one sound for very long.

Sonically the album well done. The dynamic range of the CD is really excellent. Instead of compressing the sound to make the record uniformly loud as is so often the case these days, The Good Red Road really puts the wide dynamic range of the CD medium to good use, so that the strong passages really have impact when they occur. Also sound of the light percussion and guitars are quite commendable. My only quibbles are that Farr's vocal has a bit too much reverb, and the sound of the full drumset is tad uneven. Evan Richey engineered and mixed the album in New York, and served as co-producer with Farr.

Ned Farr's The Good Red Road was recorded back in 1995, but is only now getting some exposure outside the artist's local circle. He is already working on a follow-up to be called Desert Motel. Farr may be one of those artists reluctant to got though the ordeal of promoting his own music, partly I would guess because these songs are quite personal, but now that he has finally done it, we can all be glad to be introduced to this excellent and instantly memorable artist.