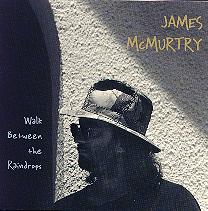 James McMurtry: Walk Between the Raindrops -- by George Graham

Singer-songwriters come from many different directions. Some are the confessional teller of personal travails about relationships, some address the bigger problems of life, including politics, while others wax philosophical, and still others tell tales with varying degrees of detail.

This week we have a new album by one of the finer musical story-tellers on today's singer-songwriter scene, one who fills in just enough detail to make things intriguing, while doing what the best of the genre does by using the stories to make larger observations on life. James McMurtry's new fifth album is entitled Walk Between the Raindrops.

James McMurtry came to musical storytelling rather naturally. He was born in Fort Worth, Texas, to a mother who was an English professor at the University of Richmond, and a father who is a best-selling author, Larry McMurtry, who wrote Lonesome Dove and The Last Picture Show. Young James learned a couple of chords on the guitar from his mother by age seven, and by the time he enrolled in the University of Arizona at Tucson he began performing and writing songs regularly. He followed a zigzag route in the manner of several of his predecessor Texas singer-songwriters, wandering off to Alaska where he played in what was described as a beer joint. He returned to Texas and first lived at the family homestead in Wichita Falls, then headed for San Antonio, where he worked a series of non-musical odd jobs, such as house-painter and bartender while honing his craft and playing at every opportunity. By 1987, McMurtry won a songwriting contest at the Kerrville Folk Festival, which has opened the doors to many a performer such a Lyle Lovett and Nanci Griffith. McMurtry eventually caught the ear of rocker John Mellancamp, who was attracted to McMurtry's insightful and occasionally jaundiced musical view of the world. So McMurtry found himself with a major-label deal, and Mellancamp produced his debut album. After three records for Columbia, McMurtry was dropped by the label but his craft seemed to blossom freed from the commercial pressures. His first album for the independent, bluegrass-oriented label Sugar Hill, a CD entitled It Had to Happen, was a masterpiece that put McMurtry in the company of Austin steel guitar player and tasteful record producer Lloyd Maines. That 1997 record, whose lyrics were a kind of loose coming-of-age suite, featured a great small backup band with sparse instrumentation but a great rhythmic groove. McMurtry himself often used electric guitar but still sounded the folkie. His vocal delivery, with a nasal quality that imparted a sound somewhere between a sneer and a world-weary sigh, was a perfect foil for his songs that told tales of often-flawed characters that he claims are not autobiographical.

Walk Between the Raindrops follows its predecessor by just over a year, and continues very much the same overall sound, in a kind of laid-back electric folk-rock style with a great groove, but with the instrumentation and arrangements working to supplement the songs, rather than attract attention to themselves. And some of the songs again look at the passage of time, while others range from tales of broken love to a complaint about bad treatment by airlines.

Lloyd Maines was again the producer and the band is much the same as well, with Ronnie Johnson on bass, Lisa Mednick on keyboards, Chris Searles on drums for most of the tracks and Maines on various slide and steel guitars. McMurtry himself plays electric and acoustic guitars. This is apparently a road band. McMurtry and company rock out a little more on this record than the last, and the group has the musical tightness that comes from playing repeatedly before audiences. They also provide a textbook example of how folk-rock should sound, laid back and focussed on the songs.

While It Had to Happen had some songs that considered the loss of youth, Walk Between the Raindrops starts with a song that sounds like sage advice from an experienced person to a youth. The bouncy title song has a vaguely country sound with its low twangy guitar. <<>>

A different lyrical approach is taken on Every Little Bit Counts, in which the protagonist is gradually trying to get his life together. <<>>

McMurtry has come up with some great lyric lines in his career, and this album has a song with some real gems. Fast As I Can, a tale of two unfortunate characters drawn to one another, starts right off with a classic <<>> and keeps them coming. <<>>

Some of the most intriguing musical narratives are lean on detail, allowing the listener to fill in the rest with his imagination. Tired of Waiting is a story about somebody who does something really bad, but one is left guessing what. The song is McMurtry at his storytelling best in one of the strongest rock settings on this CD. <<>>

McMurtry has addressed his own profession, and the music business, in the past. Walk Between the Raindrops features two songs that consider the life of an itinerant performer. Racing to the Red Light has as its subject a career choice to something as uncertain as being a performer. <<>>

Also considering the life of a folkie is Airline Agent a great piece about mistreatment by an airport boarding person who doesn't like the looks a the scruffy guy with a guitar and gives him a hard time. <<>>

Returning to the subject of young versus old is Soda and Salt, seemingly on the restlessness and rebelliousness of youth. <<>>

Though most of the album's music is first rate, there are a couple of tracks I would describe as "filler material." A song called Comfortable was written by McMurtry and most of his band. Perhaps because of that, it lacks focus and is rather musically predictable. <<>>

On his last album, McMurtry included a cover from another Texas singer-songwriter. He does it again on this CD, with Rex's Blues by Townes Van Zandt ending the album. It has a decent rock beat, but the performance falls short of the rest of the CD. <<>>

James McMurtry's new fifth album Walk Between the Raindrops, is another excellent work from one of the bright lights of the Texas singer-songwriter scene. McMurtry takes after his novelist-father in great storytelling, with some clever turns of phrase; and his band, honed through regular touring, is in great form on this CD. It's folk-rock at its best, with great, literate lyrics and a musical setting that provides a comfortable and compatible backdrop, often rising to an infectious rock groove, but as often as not, laying back to an arrangement that's as laconic as McMurtry himself. The singer-songwriter's vaguely detached, sometimes world-weary delivery is a perfect match for the attitude reflected in many of his songs.

From a sonic standpoint, the album is quite respectable. The sparse instrumentation is recorded well, and any temptation to fill the album up with artificially big sounds and studio effects is thankfully resisted. But Walk Between the Raindrops is slightly inferior to its predecessor. With a similar band and the essentially same studio and engineer, a comparison is obvious, and as usual, the villain is the compression in the mastering process. Last year's release It Had to Happen had more open, airy sound thanks to a somewhat wider dynamic range.