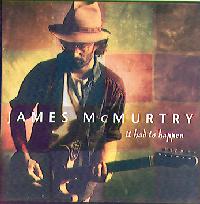 James McMurtry: It Had to Happen -- by George Graham

The art of the singer-songwriter has become timeless, persisting beyond the frequent comings and goings of pop music fads. For over three decades, a performer getting up and weaving music and poetry together has never lost its relevance. While it tends to go in and out of vogue on the pop charts -- mostly out -- as an art-form, it is seemingly inexhaustible, despite its simple concept. We're in a period in which good singer-songwriters seem not to count much as far as the commercial music industry is concerned, nevertheless the artists are proliferating, with the number of even the really worthy singer-songwriters plying their trade approaching the overwhelming.

This week we have the work of yet another, whose music has that timeless quality the best practitioners evoke. It's James McMurtry, whose new fourth album is entitled It Had to Happen. And like many a singer-songwriter of intelligence and integrity, he was dropped by a major record company and moved to the ranks of the independents, in this case, going from Columbia to the usually folk-and-bluegrass label Sugar Hill, which has lately been carving out a niche as a home of first-rate folkies.

Thirty-five year old James McMurtry was born in Fort Worth, Texas after the marital breakup of his mother, a University of Richmond English professor, and his father, novelist Larry McMurtry, author of The Lonesome Dove and The Last Picture Show. James stayed mainly with his father in Houston, took up guitar by age seven, and also plunged into acting while still in school, even landing a film role. He began playing his songs before audiences while in college at the University of Arizona at Tucson. After a detour to Alaska, where he did some performing, he ended up working "day jobs" such as housepainter and bartender in San Antonio. His career began to take off in 1987 when he entered and won the songwriters' contest at the Kerrville, Texas, folk festival.

By 1989, he had gained John Mellancamp as a fan, who produced his debut album Too Long in the Wasteland, and served as executive producer of its follow-up, Candyland, three years later. Both were marked by McMurtry's inherited storytelling gift, along with a kind of jaundiced, but not quite bitter, attitude about life, reflected in some of his characters, and his often-sardonic manner of delivery. Three years against lapsed before McMurtry's last album Where Did You Hide the Body, produced by Don Dixon, and featuring Dixon's slightly more pop-oriented sound.

Now, less than two years after its predecessor comes It Had to Happen, McMurtry's first album recorded in his home state of Texas, with steel guitar player and multi-instrumentalist Lloyd Maines serving as producer. And for me, it's McMurtry's best, with some of his finest songs, usually woven around a storyline or interesting characters, set in some very tasteful and understated production, despite the generally electric instrumentation.

Once again, McMurtry's songs tell stories of, or mull over, the hand that life has dealt -- aging is often a theme -- delivered with both an attitude and a vocal style that is somewhere between a smirk and an air or resignation. The backing consists of a rocking little band that can set up a great groove, but always remembers its role to accompany and supplement the songs. Ronnie Johnson plays bass, Chris Searles is on drums and Lisa Mednick handles the keyboards, including accordion. There are a few additional guests such as producer Mains, who plays slide guitar, backing vocalist Randy Garibray, Jr., and Austin guitar notable Charlie Sexton.

The album gets under way with a song reflecting an interesting attitude toward one's state of life, presumably about aging. In the joint McMurtry/Wally Wilson composition, Paris, the main character reaches a point that he realizes that those around him feel he poses "no danger." The band provides some tasteful electric backing. <<>>

A similar subject is eloquently expounded upon in the following piece Peter Pan, whose chorus gives the children's storyline a new, and world-weary spin. <<>>

Another wonderfully sardonic viewpoint comes on No More Buffalo, which considers the obstacles to fame and fortune in the music business. <<>>

On the same subject, McMurtry throws a few zingers in the direction of philistine audiences on Be with Me, on which he certainly sounds the part of the curmudgeon, while the band plays a rocky little dirge, complete with mandolin and accordion. <<>>

The most musically upbeat song on the album is For All I Know, whose somewhat opaque lyrics are set in an infectious Zydeco-influenced groove. <<>>

One of my favorite pieces on the album is a set of childhood memories set into a song called 12 O'Clock Whistle, done mainly with just McMurtry's guitar and harmonica and Ronnie Johnson's bass as the accompaniment. <<>>

There is one cover song on It Had to Happen, a composition by Kinky Friedman called Wild Man from Borneo, written from the standpoint of the circus attraction in question, and by extension life as an exhibition. It's the kind of song that fits McMurtry perfectly. <<>>

The album ends with another of its gems. With some of McMurtry's best wordcraft, Jaws of Life, explores some of life's possibilities, and the unfulfillment of them. <<>>

James McMurtry is carrying on the great singer-songwriter tradition on his new, fourth and finest album It Had to Happen. Now off the major label scene, McMurtry is free to pursue his songs in a more laid-back intimate setting. But the album also sees his songwriting in peak form. He tells stories, examines the characters in his world and casts his own appealingly sardonic light on life. Of his own craft, McMurtry writes: "If I wrote straight autobiographical stuff, it'd be so boring. That's the same reason I try not to give opinions in songs. As soon as that happens, you're preaching... It's better to just tell the story and let listeners make up their own minds."

Sonically, the album is well done with a nice clean mix, and a minimum of studio gloss. The sound is like rest of the album -- plain and unadorned -- to let the songs and their stories be told. Producer Lloyd Mains and engineer/mixer Fred Remmert had the right idea.

Storytelling singer-songwriters are not exactly an endangered species. There are a lot of very good ones around. But on It Had to Happen James McMurtry blossoms and stands out as real master of the craft.