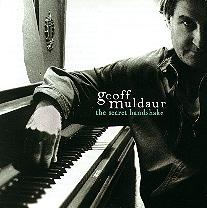 The blues is a music with a long tradition. It was influential in the formation of both jazz and rock, even early country music borrowed elements from the style. While many of today's up-and-coming blues artists draw their influences from perhaps one generation back, there are those who have been students of those long traditions of the blues and draw on elements of early acoustic country blues from artists whose period preceded World War II.

Geoff Muldaur is himself a veteran performer and one of those people who for much of his over 35-year career has been drawing on the work of such pioneering artists. His new album, his first in several years, is a celebration of blues traditions as well as enjoyable exercise in eclecticism. It bears the title The Secret Handshake.

Geoff Muldaur came out of the folk scene in the Boston area in the early 1960s. He first came to fame as a member of the Jim Kweskin jug band, a popular group in its day, another of whose members, Maria D'Amato became Muldaur's wife and for a while musical partner. Geoff and Maria Muldaur issued two albums together as a duo, and of course, Maria Muldaur went on to considerable acclaim on her own. Meanwhile, Geoff recorded on his own, and became a member of Paul Butterfield's second blues band, Better Days. He toured extensively and worked as a backing musician on records by artists like Bonnie Raitt, Bob Dylan, and country songwriter Hal Ketchum. He also worked as a record producer and created soundtracks for films and television, winning an Emmy for one of the latter. His version of the song Brazil was used in the Terry Gilliam film of the same name. Over the years, although Muldaur was not that well-known among the general public, he attracted many artists as fans, including Loudon Wainwright III, who called Muldaur one of his heroes, Richard Thompson, Ms. Raitt and Bob Dylan.

For his new album, Muldaur draws on his past influences, including some of the early artists whose recordings led him to get into music in the first place. The Secret Handshake is also a kind of loose autobiographical musical sketch of the artist, which becomes apparent especially after one reads the liner notes, including Muldaur's reasons for selecting the songs, and his inspiration for the two original pieces on the record.

The making of The Secret Handshake was also a journey of sorts, taking over a year, and being recorded in studios in New York, Austin, Texas; San Francisco; and Golden, Colorado. He is joined by a diverse group, including among others John Magnie of the Subdudes, Hal Ketchum, Lenny Pickett of the Tower of Power Horns, mandolinist David Grisman, his own musical partner in Paul Butterfield's band Amos Garrett, and Sean Hopper of Huey Lewis and the News. Most of the music is the work of early blues performers like Sleepy John Estes and Leadbelly, though there are also a couple of songs from gospel composers, as well as the two originals. While Muldaur keeps the sound outwardly traditional, he often takes liberties in mixing influences. The diverse musical ingredients that come together in New Orleans are a recurring theme, from a little Cajun influence, to a tune that was often sung at New Orleans funerals. The album comes across with a combination of tastefulness, and a spirit of good fun, while still holding a reverence to the influences.

The Secret Handshake gets under way with a song called The Wild Ox Moan, written by Vera Hall, who, the liner notes relate, was gospel and blues singer whose work was first recorded by folklorists during the 1930s. Muldaur's vocal hints at the what he describes as Hall's "strange bluesy yodel" which he later heard Howlin' Wolf do. The arrangement is laid-back and show a bit of jazz influence. <<>>

From the gospel tradition comes This World Is Not My Home an old standard by Alfred E. Brumley, author of such classics as I'll Fly Away and Turn You Radio On. The arrangement is given a degree of added sophistication with a little harmonic alteration, and the added horns. It's probably the closest thing to a pop arrangement on this generally authentic-sounding record. <<>>

One of the surprises on the CD is Alberta, by Huddie Leadbetter, better known as Leadbelly, who was known for his bluesy folk played on a 12-string guitar. Muldaur with the help of accordionist John Magnie and fiddle player Eric Levine give it a Cajun touch that gradually takes also on a little of a New Orleans shuffle. <<>>

One of the original songs, Got to Find Blind Lemon Part 1 is an autobiographical tale about Muldaur's early days of roaming around the country with friends, looking for the grave of Blind Lemon Jefferson. Among his exploits on that 1961 trip was deciding to ask to be put in jail for lack of a warm place to sleep. <<>>

The most interesting arrangement on the record is a medley starting with the old blues tune Chevrolet, which has also been recorded by Taj Mahal, among others. Muldaur weaves it into the tradition of African American fife and drum groups, which according to the liner notes, were mentioned by Thomas Jefferson two hundred years ago. The piece takes on a New Orleans groove, using the so called "hambone" rhythm made famous by Bo Diddley, while Muldaur does both halves of a call-and-response sequence... <<>> The other half of the medley is the jazz tune Big Alice by former Charles Mingus pianist Don Pullen, done as an extended instrumental jam. <<>>

Another bit of eclecticism comes on Mistreated Mama, a traditional tune Muldaur learned from early Appalachian country singer and banjo player Doc Boggs. The tune is a curious mixture of old-time country and ragtime, with a wind section including French horn and bassoon. The result, despite the bleak lyrics, is a lot of fun. <<>>

Early blues artists had among them quite a few whose principal accompaniment was piano. I Can't See Your Face is a piano blues written by the late Walter Davis, with the piano here provided by John Nichols. The performance again captures a combination of authenticity with a more contemporary laid-back feel. <<>>

The album ends with a solo performance with an old gospel tune Just a Little While to Stay Here, described by Muldaur as one of the songs he used to hear at New Orleans funerals, after the corpse was buried and everybody was ready to party on the way back from the graveyard. In such circumstances, the arrangement would be like Dixieland, but Muldaur gives it a more reverent treatment. <<>>

Geoff Muldaur's new CD The Secret Handshake, is an enjoyable musical excursion exploring some of the early blues traditions with a healthy dose of eclecticism thrown in. The veteran performer keeps a degree of authenticity in the various facets of the music represented on the record, but he freely mixes traditions, and sometimes takes songs in unexpected directions. His vocals are generally laid-back and understated, though he can turn up the energy level. In fact, that sums up this whole record. While there is a spirit of good fun underlying everything, all the musicianship is the model of restraint and tastefulness. The result is an album that does not knock one on the head, and may not immediately appeal to those whose idea of the blues is the high-volume Chicago or Texas electric varieties. But with time, this CD's subtleties will become apparent, making it a an album that will stand up to many a hearing, revealing something new each time.

From a production and sound standpoint, Muldaur produced and arranged the CD himself, and did an excellent job. Despite the fact that the recording was done in several studios around the country, it is very coherent sonically -- Daryn Rovyn was the mix engineer. The recording nicely captures the subtleties of the music, and the dynamic range is decent. It rewards listening on a good stereo system. The CD booklet notes are also outstanding, providing good background on the songs.

In a musical career that spans three and a half decades, Geoff Muldaur has generally not strayed far from the blues. His new album, his first in several years, looks to some of the blues pioneers, while managing to cast new light on some old material.