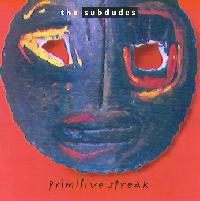 So-called American Roots Music is a getting a fair amount of attention these days. Inspired by the revival of interest in folk, blues and early rock & roll, the style concentrates on guitars, shuns synthesizers, and often includes instrumentation such as accordion. While it has a lot of time-tested elements, this sound in its current form is a relatively new one, and arose partly as a reaction to the processed and sometimes pretentious sound of commercial pop in the 1990s. One group that personifies this sound is the Subdudes, whose new, fourth album is entitled Primitive Streak.

The Subdudes got their start in 1987 after three of the band's members relocated from Edgard, Lousiana to New Orleans. After serving in groups like the Continental Drifters and Lil' Queenie and the Percolators, they landed a gig at the famous club Tipitina's in the Crescent City, and for that performance, came up with the name the Subdudes. Their sound was steeped in the New Orleans tradition, borrowing influences from R&B, a little zydeco and the vaguely rhumba-flavored style of Professor Longhair. Their instrumentation was an interesting blend of the standard guitar and bass, but with an accordion -- certainly not uncommon in Louisiana music -- plus percussion provided mostly by a simple tambourine played by Steve Amadee, who became the group's most distinctive sonic signature. The other Subdudes include Tommy Malone on guitar and lead vocals, John Magnie on the keyboards, including the squeeze box, and bassist Johnny Ray Allen.

Later in 1987, the Subdudes moved to Boulder, Colorado, but their musical hearts remained in New Orleans. After being signed to Atlantic they released their debut album in 1989. While the group hardly achieved massive hit status, they immediately won recognition and fans in the musical community for their distinctive and thoroughly honest sound. They became in-demand guest musicians on albums by Joni Mitchell, Shawn Colvin, Rosannne Cash, and fellow Coloradan Tim O'Brien, among others.

While the group did a lot of touring, following their second album, they were dropped by their record company after they had already recorded a third, which was never released as intended. Then after a three-year hiatus, they returned on Windham Hill's High Street label with Annunciation, an outstanding album that captured all that the Subdudes did best. It was recorded in New Orleans, with some of the tracks produced, interestingly by the famous British rock producer Glyn Johns.

These days, the four Subdudes all live in different parts of the country, but according to a record company press release, locked themselves in a cabin in Red Feather Lakes, Colorado, for a week and did some serious songwriting. And this time, they came up with a rather more stylistically diverse batch, which they proceeded to take to New Orleans to record. For their producer, they enlisted a veteran figure on the Crescent City music scene, Clark Vreeland. The result is another fine recording that expands the group's scope without sacrificing what has made them so distinctive musically, and appealingly honest and unpretentious.

Primitive Streak does run from more electric and even rock mainstream in sound, to a song with a string trio providing the accompaniment. But most of the time, it's the instantly recognizable Subdudes sound with accordion, tambourine and some slide guitar. On this album, they are joined by several guests, including honorary fifth Subdude Willie Williams of the Zion harmonizers, who sings and plays guitar, a horn section, the above-mentioned string players, and Bonnie Raitt who adds her vocal and guitar to one especially memorable tune.

Lyrically, the Subdudes often have a gospel-like quality to their writing. Though they may cover the well-travelled ground of personal relationships, they often do it in a manner that urges optimism in the face of difficulties. The also look at death on a couple of songs from the perspective of passage to the hereafter.

The album gets under way with one of its stylistic departures, All the Time in the World, which incorporates parts of the old rock tune Wild Thing. The electric slide guitar combines with an added horn section in this song with a distinctly party atmosphere. <<>>

More in keeping with the group's trademark accordion-and-tambourine sound, is Do Me a Favor. But they add a little twist with a banjo and the occasional vocals of Willie Williams. <<>>

On their last album the Subdudes did a very nice musical eulogy to bassist Johnny Ray Allen's mother called Angel to Be. Primitive Streak has two songs that deal with the loss of a loved one. The first, Carved in Stone, takes a slightly country-influenced sound, and conveys the group's sense of optimism and encouragement in a really nice piece of writing. <<>>

The only non-original song on the album, called Sarita, a new piece by composers Tim Cooke and Steve Strickland, also seems to touch on the subject of the passing of someone close, as evidenced by the last verse of this otherwise of this upbeat and danceable tune, full of the all the musical ingredients that make the Subdudes so distinctive and appealing. <<>>

Another song with a juxtaposition between lively music and unhappy lyrics is Why Do You Hurt Me So, whose title is rather self-explanatory but whose music makes it hard to resist getting up to dance. <<>>

The Subdudes' New Orleans credentials come through especially well on Don't Let Them, which has a bit of the Professor Longhair styled beat, an R&B-flavored horn arrangement and John Magnie playing some zydeco riffs on his accordion. <<>>

The song with Bonnie Raitt is a definite highlight of Primitive Streak. Too Soon to Tell is an easy-going relaxed blues with Tommy Malone on the Dobro and Ms. Raitt on the electric slide guitar. She and Malone make a great vocal duo. <<>>

Perhaps the biggest stylistic departure for the group on the album is a piece called She, which features the string trio combined with more of the Subdudes' words of hope and encouragement. The result is a bit of a gem. <<>>

On the other hand, they crank it up on Love Somebody, which has echoes of old Sly and the Family Stone or other of the soul-rock groups of the 1960s. Steve Amadee's tambourine is joined by a full drumset in this tune whose lyrics could also be from the Sixties. <<>>

The Subdudes, on their new fourth album Primitive Streak, have created another fine record that epitomizes the so-called American Roots Music sound. Drawing on influences from their native New Orleans, adding their distinctive blend of sounds like accordion and a tambourine for percussion, plus their very unpretentious style, upbeat and hopeful lyrics; they create music that is unmistakably their own: no easy feat in the crowded pop world. It's music that's rhythmically contagious and could appeal to fans from Baby Boomers to their kids for whom this kind of sound is something new and cool.

Sonically, the album is rather well done. The mix ranges from outstanding to a bit gimmicky at times, but the sound quality is good, and there's not too much audio compression.

Though the Subdudes last album Annunciation from just about two years ago, was probably their best recording overall, Primitive Streak, is on the same level, and in some ways more interesting and varied.