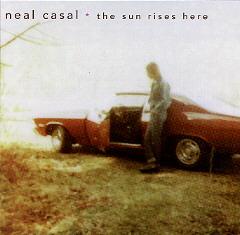 Despite an unfavorable climate at the top of the US pop charts for intelligent, articulate singer-songwriters, this is a good time for such artists. Records by the 1990s equivalent of the Sixties folksinger are being released in great numbers, including quite a few impressive debuts. Stylistically, they range from acoustic "folkies" to country-influenced, to artists who go for the accoutrements of 1990s rock.

New Jersey-based Neal Casal is a veteran songwriter and guitarist, who played in various bands and honed his songwriting skills before being signed to Zoo Records in 1994. His debut release Fade Away Diamond Time was an absolute gem, winning praise from almost anyone who heard it -- and sadly not many got the chance. Zoo Records was downsized and Casal, Little Feat and several other artists on the label lost their contracts; their records went out of print. Fade Away Diamond Time established Casal's wonderfully timeless sound: an electric folk-rock backing vaguely reminiscent of Blonde-on-Blonde era Dylan, but with a tighter, more focussed musical approach, and first-rate musicianship from top-notch West Coast players including Lone Justice's Don Heffington, Bob Glaub who worked with Jackson Browne and ubiquitous studio guitarist Greg Leisz, along with Casal's long time Garden-State friend and musical colleague, keyboardist John Ginty. Casal himself, with his instantly-appealing airy tenor voice, with a surprisingly soulful delivery, and his poetic, impressionistic lyrics, quickly proved himself to be an artist to be reckoned with.

Following Casal's loss of his record deal -- and partly because of it -- he decided to release a stark, mostly solo acoustic record Rain Wind and Speed on the independent Buy-or-Die label in 1996.

While Casal's brand of intelligent, appealing music may not have generated much interest among US major labels, Casal found himself being courted by the German-based Glitterhouse Records, whose founder is reported to have named Fade Away Diamond Time one of his "desert island discs." In 1997, Glitterhouse first released Field Recordings, a compilation of demos, outtakes and alternate versions, prior to the Casal's third full studio album, The Sun Rises Here, issued in early 1998.

For The Sun Rises Here, Casal goes for a sound somewhere between that of his first two releases. There are many of the same players as on Fade Away, including Leisz, Heffington, and the always-tasteful Ginty. The bassist this time was James "Hutch" Hutchinson of Bonnie Raitt's band. But the arrangements are more varied, and range from scaled back acoustic-guitar-dominated to all-out rock. Casal puts in his usual understated but classy guitar work, that always enhances the songs. The artist specifically set out to make a more variegated record, and the results pay off.

The bulk of The Sun Rises Here was recorded in one week on the West Coast, and mixed in one day, so the sound might not be at the level of sonic perfection that marked the Jim Scott-produced and mixed Fade Away. But musically, The Sun Rises Here is probably Casal's best yet. The playing by all is superb, with lots of nice little touches like Dobro (actually Leisz plays a Weissenborn resonator guitar), mandolin and a lot of acoustic guitar. Casal himself is at his peak, with his some of his finest songs: melodic, classic and timeless in sound, and lyrically fascinating, full of evocative imagery allowing the listener to form his or her own interpretations. (Casal takes delight in learning how others interpret his lyrics, and for that reason does not often explain his songs.) And of course, his one-in-a-million voice holds it all together with singing that can at once be relaxed and pleading, or with both a tear and a smirk.

One song Casal often explains in performance is the opening track Today I'm Gonna Bleed, a metaphor for being open and honest, sometimes painfully so. The song establishes the eclectic folk-rock sound of the CD, in a flowing waltz time that Casal often favors. The Byrds-like electric guitar contrasts with Leisz' wonderful acoustic accents.

The more introspective side of the record comes out on tracks like On the Mend with Leisz' tasteful resonator guitar, and the beautiful Halfway Through Town both with the background vocals of Angie McKenna, who has appeared on Casal's previous releases. Contrasting to that is the rockier Reason with its particularly interesting but poetically ambiguous lyrics. Casal's country side, which was heard thanks to Leisz' prominent steel guitar on Fade Away Diamond Time, takes flight here on Dandelion Wine. Casal's usually ascetic lyrical style is cast aside for a country-bluegrass drinking song. Leisz plays his steel only once on The Sun Rises Here on another of the laid-back waltzes, Best to Bonnie. Perhaps Casal's most intriguing lyrics come on Real Country Dark, whose country-stomp arrangement seems an odd contrast. (Casal and his live band have since given the song a rockier edge in performance.)

With singer-songwriters proliferating, and the US major-labels showing a distinct lack of interest in intelligent music, it's hard for such performers to stand out. Neal Casal is one artist with the combination of a distinctive style that is not only particularly appealing, but also one whose music has a remarkable ability to defy time and changing fashion. Though he was born the three years after Blond on Blonde first appeared, Neal Casal makes music that could easily have come from any time in the past three decades. He distills what makes good songs, and throws away anything that smacks of trendiness. It's ironic that currently his greatest audiences are in Europe, but with records like The Sun Rises Here, we Casal fans hope this singer-songwriter wins the recognition he so richly deserves in his home country.

As a long-time fan, and current friend of the artist, the author wishes to point out that this review might possibly not have quite the impartiality as others in the series. But Casal's work is recognized by many, including this reviewer