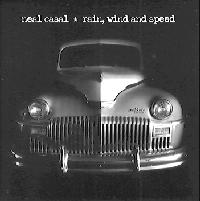 Much like many things in life, music has a tendency to be cyclical. What goes around comes around, as the cliché goes. While the alternative rock scene has sharpened the edges of pop music and diverted the focus away from lyrical content, the 1990s have also seen a renaissance of the folk-influenced singer-songwriter. Occasionally someone like Tracy Chapman will take to the charts, but most of today's singer-songwriters tend to operate out the commercial pop limelight, making their music to relatively small but appreciative audiences. Once in a while, a major label will sign a promising "folkie," but when platinum record sales fail to materialize quickly, such artists are likely to be cut from the roster and cast adrift, so to speak. Sometimes, the relationship can last for a few albums, such as the recent case of David Wilcox, a fine singer-songwriter with several albums on A&M, now plying the independent route. Sometimes, a promising artist is given the old heave-ho not long after a debut release.

Such is the case with Neal Casal, a fine New-Jersey-based singer-songwriter in his mid-20s, who epitomizes being chewed up and spit out by the media-conglomerate behemoth. In late 1995, the Zoo division of RCA/BMG released Casal's debut Fade Away Diamond Time, an absolute gem (forgive the pun) of an album that featured Casal's sometimes ruminating, alternately melancholy and optimistic lyrics in a delightfully tasteful small-group setting that had an uncannily timeless quality. It was music that could easily have come from a time before the artist was born, recalling the electric folk-rock of Dylan, Crosby, Stills & Nash, early Jackson Browne, Tim Hardin, early Jerry Jeff Walker, Tom Rush, etc.

Then while in the midst of a cross-country tour in support of the record, Casal got a call announcing the termination of his recording deal, pulling the plug on his tour support. Other harrowing experiences were to follow (noted in his "luxury liner notes" to his current release) that might have led one to hang it up, but Casal, "a bit dazed but still restless and smiling" as he puts it, persisted, not losing sight of why one makes music in the first place -- art, not business.

Pursuing the independent route, Casal returned to California to record more songs with the fine band that played on Fade Away Diamond Time, but then decided to reduce the songs to their purest form, and worked in a studio near home for just five days, joined by some musical friends and neighbors, to create the largely-solo, acoustic Rain, Wind and Speed. The result is another auditory delight, showing that very good songs, performed by a very good artist will come across regardless of the setting. Once again, Casal has created music that sounds as if it could have come from any time in the last 25 to 30 years.

Released in the summer of 1996, Rain, Wind and Speed features an acoustic setting providing us with a reminder of Casal's allegiance to the "old values" of the folk scene: thoughtful, poetic, often vague lyrics with some "killer" lines and turns of phrase, along the kind of acoustic guitar lines that would make a Sixties folkie proud, topped off with hummable melody lines. Casal delivers his songs in a high, airy, but surprisingly soulful tenor, while he fingerpicks on his old Gibson guitar (bought for a song as a basket-case and lovingly rebuilt). He is joined by the low-keyed support of keyboardist John Ginty (who was part of Fade Away Diamond Time) subtly churning away on a Hammond organ. The backing also includes a touch of steel guitar, mandolin and banjo here and there. Casal also does one song at the piano.

As on his previous album, Casal's warm, engaging style can sometimes contrast with lyrics that often run toward the melancholy or bittersweet. Parting is often a theme, such as on the beautiful Virginia Dare, and Annabelle with Andy Goessling's banjo adding a distant echo of some old sad traditional country song.

Often Casal runs toward the metaphorical or impressionistic in his lyrics creating songs may at first hearing seem opaque, but like the work of the best such songwriters, the songs can find themselves lending to situations that hit close to home for many different listeners. Hands on the Plow -- epitomizing the easy-going guitar-organ-Dylanesque-harmonica sound of this record -- from which I (possibly incorrectly) infer impressions on the passage of time, and Best to Believe -- done solo -- are the stuff of which academic treatises could be written by Casalologists of the future. (The closest thing Casal had to a hit, Maybe California from Fade Away Diamond Time contains an interesting reference to Best to Believe.) A particular favorite of mine is All The Luck in the World, another strikingly pretty song contrasting with a sad lyrical mood.

The album ends with its little masterpiece. I Will Weep No More started out as a poem by Casal's friend Robbi Robb, which the performer set to music and added a couple of extra verses. One can almost hear the lyrical style change when Casal's lyrics come in, while the song's title and refrain leave one with a positive note.

(One outstanding song not included in this CD, that I had the chance to hear Casal perform live, is Fell on Hard Times, an undoubtedly autobiographically-inspired piece, some of whose lines are woven into Casal's liner notes. It's all the more reason to see him live.)

Sonically, Rain, Wind and Speed is as intimate as its musical setting. The acoustic guitar is bright and clean, the added instrumentation is mixed subtly and tastefully, and Casal's vocals, though somewhat compressed, are unencumbered by any needless effects that would interfere with his appealing style. The album could have been mastered with a bit less overall compression, as well.

Some, who became fans of Casal (and might have thought he was a long-lost veteran folkie from the 1960s), might initially be taken by the stark, stripped-down sound of Rain, Wind and Speed. But an additional listen or two shows how effectively this album frames his songs -- which he intended -- and allows one to focus even more on his exemplary songwriting. It represents another facet of a performer from whom I hope we hear much more in the future, despite his travails with the music-industrial complex.Rain, Wind and Speed may be harder to find, with its independent release -- like many independent artists Casal also sells his CDs on the gig -- but it is worth searching out.

Writer's note: Most of the reviews on my Web site are taken from my radio album review series, which deals with CDs within a week or two or their release. This recording, released in mid-1996 did not come to my attention until early 1997, too late to qualify for a radio review feature. Having picked Fade Away Diamond Time as one of the "Graham Award" best debut releases of 1995, I wanted to share with my Web Surfing friends my enthusiasm for this artist, whom I have since had the pleasure of inviting to appear on the WVIA's Homegrown Music series.