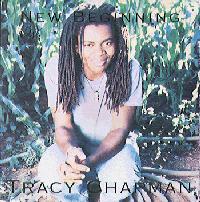 Now it seems like a long time ago, and by pop music standards, I suppose it is, but it was in 1988 that a strange thing happened on the commercial music scene -- acoustic folk-based singer-songwriters had a brief moment in the popular limelight. Suzanne Vega, and especially Tracy Chapman enjoyed hit recordings and perhaps just as importantly helped to launch a folk music boomlet that is still with us, though no longer on the pop charts. The attention that Vega and Chapman received helped pave the way for a bevy of fine singer-songwriters to land recording contracts with record companies both big and small.

Since then, both Ms. Vega and Ms. Chapman have been releasing recordings quite infrequently. While Vega became more experimental on her last album 99.9 Farenheit Degrees, Chapman has been staying more or less true to her original sound. She seems to be continuing a pattern of releasing an album each three years. Her third and last album Matters of the Heart in 1992 followed its predecessor Crossroads by three years. Now after a similarly long wait, she is out with New Beginning, which combines both familiar themes with a few more eclectic musical influences.

Ms. Chapman, now about 31 years old, is a native of Cleveland. She and her older sister were raised alone by their mother in a so-called "lower-middle class" neighborhood. A self-described shy girl, Tracy is quoted as saying she spent a lot of time alone while growing up, not having much in common with the kids in her neighborhood. She took to writing poetry, short stories, and eventually songs to amuse herself. As a girl, she took clarinet lessons for five years, before switching to guitar. "I was never happy in Cleveland," she says in a 1988 interview, "and from the time I was young was intent on creating a life for myself that was different from the way I grew up."

At age 16, she won a scholarship to a private high school in Connecticut, and there came into contact with folk musicians for the first time. Her education continued at Tufts University in Boston, where she majored in anthropology. One of Ms. Chapman's classmates at Tufts turned out to be the son of a record company executive, who used the usual music business system of nepotism to bring the talented African-American folksinger to his father's attention, who then used his connections to help Chapman get signed to Elektra Records. The label released her eponymous debut in 1988 which yielded the surprise hit Fast Car. Soon thereafter, Ms. Chapman was prominently featured in the Live Aid concerts and further cemented her reputation for bringing back folk music.

Of course, the day of the thoughtful singer-songwriter didn't last very long on the commercial music scene, and Ms. Chapman's subsequent albums have not had the kind of impact of her debut. She has also taken some heat from critics over the years for allegedly failing to live up to the promise of that first release. Indeed she does tend to cover the same subjects in song -- social injustice and romance. And her last album, though it had a lot of interesting guest musicians, seemed rather too unvarying in sound, and the production and arrangements were a bit of a disappointment.

Now, Ms. Chapman is out with New Beginning, a title which perhaps could be looked upon as a hope for her career as well as being the name of the most significant track on the CD.

This time, Ms. Chapman co-produced the album with Don Gehman, who has worked with artists ranging from R.E.M. to John Mellancamp. The backing musicians are all different from the last album. The liner notes refer to them as "Tracy's Band," so they must be her working group. They include bassist Andy Stoller, drummer Rock Deadrick, guitarist Adam Levy and percussionist Glenys Rogers. Some -- one could say "currently fashionable" -- world music influences are brought in including Celtic bagpipes and pennywhistle, and a Australian digeridoo. One can also hear occasional hints of blues and reggae influence. But for the most part, the album has an understated folk sound, and in terms of its production and arrangements is admirably tasteful.

The problem is that Ms. Chapman again hasn't really come up with the dazzling level of material that marked her first effort. The songs are literate but now seem fairly limited in scope with now familiar social issues and fairly uncomplicated romance being the topics throughout. She doesn't really add much lyrical insight, especially when compared to other of today's crop of fine contemporary singer-songwriters, but the material is still intelligent throughout.

The lengthy 64-minute CD begins with one of its more memorable songs, Heaven Here on Earth, whose lyrics are full of optimism despite the rather somber-sounding melody. The bagpipes make their appearance adding a vaguely wistful element to the arrangement. <<>>

The most sonically intriguing track is the title piece New Beginning. Gracing the arrangement are a digeridoo and a reggae beat. Interestingly, the viewpoint of lyrics at first seem to be exactly the opposite of that of the previous song. <<>> But as the track goes on, there is again optimism for the future. <<>>

Ms. Chapman is known for taking up social issues in her songs, in a folkie tradition going back to Woody Guthrie. This album includes a composition called The Rape of the World, a good old-fashioned environmental song, which now seems quite appropriate with all the anti-environmental measures working their way through Congress. The song also has references to underground nuclear testing, currently being done by France and China. <<>>

But most of this album's tracks are love songs of one sort or another. Smoke and Ashes deals with lost love, done in a tasteful classic-style folk-rock setting. <<>>

The Promise is a slow love ballad that hopes for the mending of a relationship. <<>>

On the song Give Me One Reason released as the album's first single, the lyrical shoe is on the other foot -- she is the one who wants to walk out. The words sound like a classic blues song, so the arrangement is given an appropriate treatment. Ms. Chapman is not exactly a blues shouter, but the piece is an interesting and enjoyable departure for her, enhanced by the band's tasty backing. <<>>

Perhaps the best set of lyrics on New Beginning comes on Cold Feet. It's a narrative song of hard-bitten character who has cold feet both from not being able to afford enough heat, and from shyness. <<>>

The album ends with a lengthy track containing two separate songs. The main one, as labelled on the CD is I'm Ready, which is rather a disappointment. It's a lengthy and fairly repetitive piece with an amorphous arrangement featuring a cello and a steel guitar seemingly thrown in at random. <<>> The second section is a reprise of The Promise that alters the lyrics to be a nice reply to the earlier version. <<>>

Tracy Chapman's first album in three years New Beginning isn't quite that, but it's an enjoyable recording. While she remains a intelligent and literate lyricist, the ground she covers is now familiar, addressing many of the same subjects from much the same viewpoint as before. The production and arrangements on the new album are an improvement from last time around with a regular band and generally understated arrangements that nevertheless add some new sonic elements like the bagpipes and digeridoo. Though she has a limited vocal range, Ms. Chapman is an very appealing singer with a distinctive, instantly recognizable sound.

From an audio standpoint, I have no major complaints about the recording. It has a pleasing, intimate sound free from unwarranted electronic effects. But there is a certain amount of compression to make the album play louder. That seems endemic to major label CD releases anymore.

Tracy Chapman's fourth album New Beginning should please her many fans, but it's unlikely to have either the commercial or artistic impact of her debut recording from seven years ago.

(c) Copyright 1995 George D. Graham All rights reseved.
This review may not be copied to another Web site without written permission.