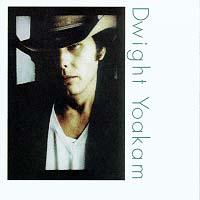 Dwight Yoakam: Under the Covers -- by George Graham

Singer-songwriters are currently enjoying a good period with lots of album releases by some fine practitioners of the art. But as something of a counter to that is the recent abundance of tribute albums, with various artists, usually songwriters in their own right, doing the music of the subject of the tribute. Another, less common phenomenon is that of respected singer-songwriters doing albums entirely of other people's music. Recent examples include Nanci Griffiths' Other Voices | Other Rooms, and cover albums by Elvis Costello and k.d. lang. Even Bob Dylan did an album of other people's songs a long time ago.

This week we have the latest example of a significant songwriter doing a collection of other people's music, and an eclectic one at that. It's by one of the major figures in the new country music, Dwight Yoakam, and his CD is appropriately entitled Under the Covers.

Dwight Yoakam grew up on rock & roll, and was drawn to the honky-tonk-influenced so-called Bakersfield style of country exemplified by early Buck Owens. Yoakam's first albums in the late 1980s were fine efforts that avoided the pretense that had been accumulating on the Nashville scene, and owed as much to Elvis Presley as Hank Williams. Yoakam gradually developed a following among country's more traditional fans, garnered airplay on the commercial country radio stations, and for a while did move toward a more formulaic sound. But he did manage to keep much of his credibility intact, with his first-rate songwriting and his rockabillly heart. After his last couple albums did not do particularly well on the commercial country scene, Yoakam decided to strike out with an album he apparently really wanted to do, and one that would let him show off his considerable versatility, and wide-ranging musical interests. The result is certainly the most interesting Yoakam album yet, and one of the most enjoyable -- except perhaps for those country fans with limited horizons -- But for the lack of some his own songwriting, it's also one of the best of his career.

Yoakam, and his long-time producer Pete Anderson cast a wide net for material, drawing in songs from people you would expect like Roy Orbison and Buck Owens, but also a lot of songs from 60s rockers like The Kinks, Van Morrison, The Beatles, the Rolling Stones, Sonny & Cher and from a generation later, the Clash. The arrangements run from Yoakam's trademark honky-tonk to bluegrass-influenced, to as far afield as Motown and big-band jazz. It makes for fun listening, serving as a showcase for some unexpected facets of Yoakam, which he handles remarkably well. The backing musicians on the album include some of his regular band members, along with bluegrass legend Ralph Stanley, as well as alternative pop star Sheryl Crow.

Things begin with a song and arrangement one would not have trouble imagining for Yoakam, Roy Orbison's Claudette, which was also recorded by the Everly Brothers. The track keeps the spirit of Orbison's style. <<>>

That is followed with one of the what I consider the two big surprises on the CD, Train in Vain, by British punk-rock pioneers The Clash. Yoakam serves it up in a style somewhere between bluegrass and Cajun, with Ralph Stanley adding his banjo and sharing vocal duties with Yoakam. Without being told in advance, one would really have to listen to the lyrics for a while to guess at the origin of the song. It's a surprise, but a pleasant one. <<>>

Another clever bit of song transformation comes on Yoakam's version of Jimmy Webb's Wichita Lineman, which was a big hit for Glen Campbell. Though the original song was a pop and country classic, Yoakam and producer Pete Anderson, who, by the way, is credited with the arrangements on the album, give the song some hints of Motown, complete with a guitar line borrowed from the Supremes' You Keep Me Hangin' On. <<>>

The first single to be released from the album is Yoakam's vocal duet with Cheryl Crow on the old Sonny & Cher song Baby Don't Go. The commercial angle is emphasized on this track, and other than the novelty of hearing Yoakam and Crow together, the song is rather forgettable. <<>>

Dwight Yoakam is famous for his appealingly twangy vocals, but he can put that twang away when he wants, to become almost an entirely different singer. Nowhere is that more apparent than on the album's other big surprise track, a big-band version of the Kinks' song Tired of Waiting for You. <<>>

Yoakam takes a sort of un-twangy, mainstream pop approach to the Beatles' Things We Said Today. Though the arrangement has a lot of potential, for some reason, the track is a bit of a disappointment. <<>>

Those who fear Dwight may be losing his twang need go no further than Playboy, a classic-style version of a Wynn Stewart Bakersfield-scene hit from 1961. <<>>

For me one of the highlights of the album is Yoakam's great honky-tonk treatment of the Rolling Stones' This Could Be the Last Time. It's Yoakam doing what he does best. <<>>

The album ends with a hidden, unlisted track, Jimmy Rodgers' T for Texas, done as a blues, and showing Yoakam's credibility with the blues. <<>>

Dwight Yoakam has become a genuine country music star, while maintaining his level of quality as a singer-songwriter, and not letting Nashville rob him of his rockabilly and honky-tonk spirit. To those who know Yoakam from his commercial country radio hits, his new album Under the Covers is likely to be a big surprise, with its very wide range of influences. And except for a two or three tracks that seem aimed at the commercial mainstream, this album's eclecticism proves to be very successful and tasteful. Yoakam gets a chance to prove his considerable versatility, along with his own wide-ranging musical interests.

For our rating of audio quality, on a zero-to-ten scale, we'll give this a five. Although the balance of instruments is generally good, sometimes there are too many studio effects like echoes and reverb. But more serious is the rather inconsistent overall quality of the sound. The album was recorded in several studios and different tracks were mixed by different people. The audio on most of the tracks is heavily compressed, with a few, like Things We Said Today and Baby Don't Go, having almost no dynamic range, the compression being so heavy that at each bass note, the vocals and guitars get pulled down a bit. Other tracks, however, such as Train in Vain fare better.

Dwight Yoakam has been one of the bright lights on the new country music scene. His new album Under the Covers, except for being bereft of any new original material, underscores that position, and allows us to add the word “versatile” to his resumé.