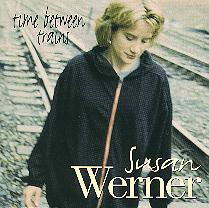 With so much bad music making its way to the top of the charts, and major record companies continuing their never-ending attempts to exploit anything that smacks of trendiess, it is perhaps ironic that this would be such a favorable time for the proliferation of outstanding singer-songwriters. As a reaction to the commercial music scene, and helped a great deal by the ease of releasing CDs independently, there seem to be more first-rate, intelligent folk-influenced singer-songwriter records being issued than ever before. They may not be selling in the millions, but such records are finding an audience among Baby Boomers who recall the folk scene of the 1960s, and a younger generation ready for music that is honest, thoughtful, literate and likely to sound good after today's trendy flavor of alternative rock or slick pop has long been forgotten. The main problem is that there are just so many good singer-songwriter records coming out that it is hard even for a reviewer to keep track of them, let alone the average music fan. This surfeit of folkie CDs has also raised the standard to the point that albums considered excellent a few years ago would now just be average.

This week we have another singer-songwriter album that raises the benchmark even further. It's the new fourth recording by Susan Werner, entitled Time Between Trains. It combines excellent writing, world-class musicianship and some of the most tasteful production I have heard in the genre, from an artist who has already been gaining great critical praise.

Susan Werner was born in Iowa and raised on a farm. She took up the guitar at age five, and eventually music became her academic endeavor. She earned her Master's degree in classical music at Temple University in Philadelphia, a city where she has since been based. After graduation from college, she worked a series of temporary jobs before deciding to take up her guitar again and plunge into the revived folk music scene. She quickly began to attract attention, landing several gigs in folk clubs. Her following has been growing ever since, helped by quite a bit of touring, both on her own, and supporting such artists as Joan Armatrading and Richard Thompson. She plays full time now, performing over 200 dates a year.

Her independently released previous albums, Midwestern Saturday Night and Live at the Tin Angel from 1993 soon became critics' favorites, and led to a major-label deal and the album Last of the Good Straight Girls. The recordings illustrated her rare combination of wonderfully appealing vocal style, great guitar and piano work, and songwriting marked by both sensitivity and wit. Despite some memorable songs on her previous releases, I think Time Between Trains is her best album yet. Her writing is more mature, and she has become even more adept at balancing the wry with the ability to make a telling point. But perhaps most attractive about this album is the flawlessly tasteful production and arrangements by multi-instrumentalist Darrell Scott who really enhances the songs with a wonderfully eclectic collection of acoustic instruments, and also seems to draw from Ms. Werner her best recorded vocal performances in this Nashville-made album.

In addition to Scott, some of the other players joining Ms. Werner include Nashville drummer extraordinaire Kenny Malone, and acoustic bassist Viktor Krauss, brother of bluegrass celebrity Alison Krauss. There are other players who appear from time to time, including a trumpeter, a violinist and a bagpipe player, but for the most of the record, the four provide the laid-back and often sparse, but sometimes swinging arrangements, which range from mellow and folky to sleekly jazz-influenced, to bluesy, to even something resembling a tongue-in-cheek tango.

The album gets under way with its title track Time Between Trains, which uses waiting impatiently in a station for a connecting train as a statement on anticipating the next event in one's life. The understated bluesy arrangement fits the song in an unexpectedly effective way, while a harmonica hints at train whistles. Those who have been impressed with Ms. Werner's wordcraft in the past will not be disappointed. <<>>

Another excellent composition follows. Old Mistake is a story about meeting at a party one's "ex," from a relationship that was decidedly one-sided. She was greatly attracted to him, and he had cast her off. <<>>

Despite the superb accompanying musicians, there are a couple of tracks that feature just Ms. Werner, more or less alone. Sorry About Jesus is a kind of transcript of one side of a phone call to an old school friend, which is performed very effectively in a solo setting. <<>>

Also in a melancholy mood is a different kind of love song. Without the title of Courting the Muse, one might have difficulty figuring out from the lyrics that the object of the pursuit is creative inspiration, which seems to thrive on adversity. <<>>

In the category of "men are from Mars, women are from Venus" is the semi-spoken narrative Bring Round the Boat, done in a jazzy setting. Musically, the song is likewise a great piece of writing. <<>>

Also from a woman's perspective is Like Bonsai which uses the small Japanese trees as an metaphor for limited opportunities or what has been called "the glass ceiling." This is another example of the very effective arrangements of Darrell Scott. <<>>

The album contains two covers. The more surprising choice is Don McLean's Vincent, a song which came close to becoming a lounge standard, but Ms. Werner gives it a new twist in a sensitive acoustic treatment. <<>>

One of my favorite pieces on the album is actually a hidden track following Vincent. There's no title listed anywhere, so we'll call it When They Make a Movie of My Life, and it's a wonderful blend of the tongue-in-cheek and classy musicianship. The song fantasizes about one's life being given a film biography, then decides that maybe it's not such a good idea after all. Scott and Werner come up with a archetypically romantic tango-style arrangement, complete with a sort of Gypsy violin. The song is hilarious, but also makes a point in its own way, that one's ordinary life may not be so bad after all. And the musicianship is superb. <<>>

Susan Werner's new fourth album Time Between Trains is her best yet. She has come up with another outstanding batch of songs that demonstrate why she is on so many people's short lists of bright lights on the singer-songwriter scene. And making this album even more special is the exquisite production by Darrell Scott, who added just the right musical settings to the songs while staying almost entirely in the acoustic realm. As a producer, Scott also got some of the best recorded performances out of Ms. Werner that I have heard, especially vocally. The album is a real gem.

Sonically, Time Between Trains is also first rate. The sound is bright and up-close, which is just right for the sparse acoustic instrumentation, and the lack of studio effects allows the subtleties of the performance to come through. The dynamic range is also decent for a major-label-distributed release, though skipping the compression added in the mastering process would have made it even better.

With literally dozens of singer-songwriter albums being released around the country every week, the form continues to prove its durability and versatility by relying on the content of the music and the sheer talent of the artists to stand or fall. But with such a surfeit of music, it's hard to stand out. Susan Werner's new album is definitely a brilliant beacon of a record in a crowded field