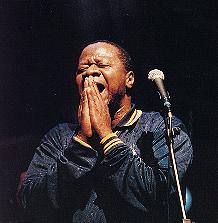 When the World Music scene started to make inroads into the US following Paul Simon's Graceland album, a lot of interesting styles from the Third World began to be released on record in this country. At first, they were presented one genre at a time, but in recent years the mixing of styles, often with wild abandon, has made for some fascinating and occasionally perplexing music. The fusing of African sounds with everything from reggae to Celtic has made for some especially interesting listening. But the contemporary African pop scene, with which itself is an amalgam of traditional rhythms and Western influences still has a great deal to offer.

This week we have the latest album by one of the long-time bright lights in African pop, Papa Wemba, a CD entitled Molokai.

Papa Wemba, though based in Paris for the past dozen years, comes from a country that has seen a good deal of turmoil recently, the Democratic Republic of Congo, until recently known as Zaire. Wemba came out of a rich music scene based in the Zairean capital Kinshasa, where such styles as hi-life and soukous developed, ironically encouraged by the policies of dictator Mobutu Sese Seko. An active music scene with stiff competition among bands was the rule, with Mobutu going through a period that encouraged the promotion of traditional African elements. Wemba came up playing in various bands on the Kinshasa scene in the 1960s and 70s, and was one of the founders of soukous or "rumba rock" which blended a surprising degree of Latin American influence with more traditional African sounds, and the distinctive high rippling electric guitars that is a trademark of the eminently danceable style. Papa Wemba founded Zaiko Langa Langa, one of the pioneering groups in Kinshasa.

In 1986, Wemba moved to Paris, and joined an active scene there of African expatriates and visitors in a growing artistic community that further fused African and Western influences.

Molokai is Papa Wemba's first album in three years, and it's an interesting record in several respects: first, that it was recorded essentially live in the studio, with almost no overdubs of any consequence; second in the particularly wide range of influences, including a salsa song, an acapella track, and ballad with piano accompaniment; and third in the fact that much of the material consists of compositions Wemba has recorded before, though in somewhat different treatments.

The album was produced by John Leckie, who has worked with British pop groups like Radiohead and the Stone Roses. Leckie set out to reproduce the live energy of Papa Wemba and his half-African, half-European band, so the only overdubs were of some instruments that the musicians just did not have hands enough to play live. That does add a degree of spontaneity and energy that was sometimes not as prominent on Wemba's previous CDs.

Though the soukous style is itself a musical hybrid, Papa Wemba on his previous albums held mostly to the genre he helped to create. This time, the "rumba rock" is expanded quite a bit, and there are several stylistic departures for Wemba. Some are logical extensions of his style, like the salsa influenced piece, and others, like the ballad with piano accompaniment are quite a surprise.

Papa Wemba's previous albums have has some US distribution, so his revisiting material, including two songs that were on his most recent album, is a bit out of the ordinary. But he does give the songs revised performances. A significant omission from this album compared to his past release is translations of the lyrics, which the artist sings in Langala, the language in which Wemba records almost all his material. Translations of his often-poetic lyrics were provided on his last CD Emotion which contributed to its enjoyment. But for those who are not fluent in Lingala, Molokai still provides engaging listening, with its superb musicianship, frequently irresistible dance beat, and the memorably emotional and often plaintive style of singing, which still owes much to African traditional music. Wemba acknowledges the influence of his mother who worked as a "pleureuse," a professional mourner at funerals.

The album opens with its acapella piece, Excuse Me, which shows the striking quality of the vocals of this performer best known for his danceable music. <<>>

That leads into Zero which is a nice hybrid of African influences -- including the 6/8 rhythm and Wemba's vocal style -- with the Western pop ingredients. <<>>

One of the new compositions is a wonderful example of the classic soukous style at its best, with its flowing, vaguely Latin rhythms and distinctly sunny African ambience. Bakwetu, though quite danceable, has more in common in its length with a pop song than with the extended African pop dance numbers. <<>>

Image is one of the songs that Papa Wemba re-does on this CD. The arrangement is more eclectic here with shifts between rhythms, and more Western pop elements among the ingredients. <<>>

Also with a classic Afro-pop sound woven into Latin-American influenced beat is Sakana, another of the album's most appealingly danceable tracks. <<>>

A composition repeated here that Papa Wemba just recorded on his last album is Shofele, which was one of the highlights of his CD Emotion. The arrangement here is somewhat different, with some more interesting and subtle facets, but the basic direction of the piece remains the same. <<>>

Another reprised song provides the vehicle for Papa Wemba and his band to jump headlong into salsa, African style. Epelo, another re-make of a tune on Papa Wemba's 1995 album Emotion, becomes one of the most danceable as well as one of its most interesting pieces. <<>>

The album's biggest surprise -- and it's a pleasant one -- is Awa Y'okeyi, on which Papa Wemba is accompanied only by Patrick Bebey's piano. It would have been nice to have a translation of the Lingala lyrics for this obviously emotional song. <<>>

The album ends the one piece whose lyrics are translated in the CD booklet, Esclave translates as "slave" and laments the sad history of slavery in America and the Caribbean, in a surprisingly bright, sunny musical setting. <<>>

Papa Wemba's new CD Molokai was named after the Hawaiian island where a leper colony was established in the last century. Papa Wemba saw a film about the colony while growing up in Leopoldville, which is what Kinshasa was called in colonial days. He identified with it, and has used the name in several ways over the years. In fact, he calls his current band "Molokai." Molokai the album, is a good example of the eclectic direction of African pop. Papa Wemba, whose career goes back about 27 years, was influential in the development of the soukous or "rumba rock" style. But he has also now chosen to expand his musical horizons on his new CD to everything from a piano ballad to salsa. The result is a record that is not only interesting to consider from a cross-cultural standpoint, and admire for the sheer quality of the musicianship, but many of the tracks are also a lot of fun to dance to.

The album's production and sound are first rate. Producer John Leckie trimmed the tendency for African dance pieces to run for great length, while at the same time not going too far in the direction of Western commercial pop. The album's mix and sonic clarity are admirable. But there is still some compression in the mastering process that could be done without.

The World Music charts these days are dominated by Celtic, new age pseudo world sounds and reggae. But the African, or if you like, African-fusion scene is still the source of some creative and engaging music. Papa Wemba's Molokai epitomizes that, with music that's both danceable and fascinating.