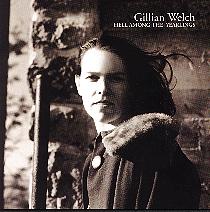 Gillian Welch: Hell Among the Yearlings -- by George Graham

There is definitely a streak of nostalgia running through parts of the contemporary music world now. While a good portion of the pop scene continues to ride the wave of trendy new sounds, there are revivals of everything from 1930s swing to 70s disco. Among the more worthy of the revivalists are the roots-rockers, who derive their influences from the days when rock's principal ingredients were country, folk and blues, and synthesizers hadn't been invented. One step beyond the roots rockers are what could be called the neo-traditionalists, performers who strive to present the essence of some classic American genre like old-style country, honky-tonk or bluegrass while making new, original music.

The term "neo-traditionalist" couldn't fit Gillian Welch better. She, and her composing partner David Rawlings have become known for their uncanny ability to create songs that sound for all the world like authentic traditional Appalachian folk or old-time country songs, in the manner of artists like the Carter Family. Already her songs have been recorded by such artists as Emmylou Harris and the bluegrass duo of Tim and Mollie O'Brien. Following her much acclaimed 1996 debut recording called Revival, Ms. Welch has just released her second album, entitled Hell Among the Yearlings in which she continues her journey into original songs that ring true to the traditions, performed in a stark, mostly acoustic setting.

For this kind of music, Ms. Welch could not have a more unlikely background. Born in Los Angeles 30 years ago, Ms. Welch was the daughter of show business parents, who were a team who wrote music for the Carol Burnett TV show in the 1970s. Growing up, she had as friends and regular visitors the TV cast members. Naturally, with musical parents, Ms. Welch began taking up instruments at an early age, playing guitar, drums, piano and ukulele. Her first exposure to anything resembling folk music was James Taylor. She was also a fan of the Beatles and Randy Newman, who was a favorite of her father. In high school in the mid 1980s, she became a big aficiando of R.E.M.

Then in college, at the University of California at Santa Cruz, she became involved with alternative rock, and at the same time found herself enchanted by a bluegrass band who played a weekly gig at a local pizza place. So she plunged into bluegrass, listening to traditional groups like the Stanley Brothers and more contemporary artists like Peter Rowan and Hot Rize. After graduating, she moved to Boston to attend the Berklee College of Music, where she took in the Boston alternative rock scene including such groups as the Pixies and Throwing Muses. But bluegrass and old-time country kept a special place in her musical psyche. At her last year at Berklee, she met David Rawlings, who would become her constant songwriting partner. They decided to move to Nashville, and it wasn't long before their songs began to attract the attention of music publishers and a record company. After landing a record deal, Ms. Welch T Bone Burnett, known for his tasteful work with roots rock performers, to produce her debut album entitled Revival. The record attracted a lot of attention, especially among other performers in country and bluegrass, who covered some of her songs.

Now Ms. Welch is out with a fine sophomore effort, with more excellent songs, and if anything, an even more stark, unadorned sound that evokes the feeling of the earliest traditional country recordings, with lyrics that are often downright fascinating. Joining her on the album, also produced by Burnett, is David Rawlings, and almost no one else. Usually the arrangements are just Ms. Welch's guitar or banjo, played in a old-time clawhammer style, with Rawlings' guitar, frequently a metal resonator guitar that can further add to the melancholy quality of the record. And Rawlings does vocal harmonies providing the lonesome, haunting two-part vocal style that was also an important part of old-time country and early bluegrass. Burnett's production lets the two be themselves with not much intrusion from the studio.

Once again, Ms. Welch and Rawlings create songs that people would swear were traditional, ranging from bluesy to gospel to love songs in the very roundabout language that was characteristic of the old songs. Typical is the opening track, Caleb Meyer, a juicy tale of rape and murder told in the traditional Appalachian folk style. <<>>

Following is a more mellow sounding, though no less melancholy song called Good Til Now. The piece has a wonderfully relaxed, informal feel, that hints at both jazz and blues in its rural country setting. <<>>

Another song that seems straight out of another era, both musically and lyrically is Devil Had a Hold of Me. Ms. Welch plays her banjo, and with the very old-fashioned-sounding two part harmonies with David Rawlings, the effect is haunting. <<>>

Ms. Welch and Rawlings can write some rather amazing lyrics. One of the more striking stories is One Morning, a tale of a rider returning home after a battle. As the horse approaches, the soldier's mother realizes that the rider was dead, apparently having died in the saddle of his injuries. <<>>

Welch and Rawlings take up a subject not often dealt with in old-time country music: narcotics. My Morphine is a tale of drug dependence, a set of lyrics that might have been appropriate for an old blues song. Instead, the setting is an oddly relaxed, melodic country arrangement complete with some laid-back yodelling. <<>>

More appropriate to the Appalachian folk tradition are the lyrics to Miner's Refrain, which has the potential to become as much of a standard among country and bluegrass artists as Ms. Welch's Orphan Girl has become in the few short years since it was written. The lyrics, a simple lament on the mining life and its effects on a dying town, are close as to perfection as you can get in this genre. <<>>

Ms. Welch and Rawlings include what could be called old fashioned rock & roll. Honey Now is apparently a home recording with multiple overdubs with each playing several instruments. Electric guitars notwithstanding, they manage to give it the kind of authenticity at which they are so good. <<>>

For me one of the highlights of this remarkable album is Rock of Ages, not the traditional hymn of the same name, but an original song that sounds just as old. The strikingly plaintive song contemplates death in the setting of Ms. Welch's banjo and her oddly impassive vocal. <<>>

The album ends with another track with a very traditional sound, Winter's Come and Gone, a sad song using birds as metaphors, as in many old-time songs. The recording itself also has a old-fashioned quality. <<>>

Gillian Welch's new second album Hell Among the Yearlings is a remarkable work by a young, Los Angeles-born songwriter from a show-biz family background who can authentically evoke the sound of old-time Appalachian folk and country music. Her style of composing, with her collaborator David Rawlings, is amazing in its ability to create both the unadorned but evocative sound of old time country, with its simple open chords and hymn-like melodic lines, along with some stunning lyrics that address some serious themes like heartbreak, death, and even drug use, and phrase them in the oblique, and often sad metaphors that old-time folk songs used to make powerful statements in the days where there were social taboos against saying such things directly. Ms. Welch's vocals also capture the essence of the music, with her plaintive tone and oddly impassive delivery, with Rawling's matching harmonies, and the simple acoustic accompaniment -- often on the banjo -- completing the haunting effect. It's album that draws you in deeper and deeper taking you to another time and place, and will likely leave you very much affected by its stark beauty.

Sonically, the album is generally pleasing. It was recorded in several different studios, and some of the tracks are obviously home recordings that were perhaps intended to convey the effect of old 78-rpm records that inspired Ms. Welch in the first place. That leads to some somic inconsistency among the tracks. Simulating of an old recording is an artistic judgement call with which I usually disagree. I think that good music is best when the recording is best. Typical of a major-label album, the music's dynamic peaks were compressed out of the recording in the mastering process in a competitive quest for loudness. I have heard much worse, but music such as this should be allowed its dynamic ebb and flow.

Gillian Welch has already been attracting attention among country and bluegrass musicians for her ability to create authentic-sounding old-time songs. Her extraordinary new album underscores her position as both as a major songwriter and performer.