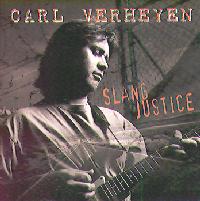 Rock musicians can distinguish themselves on the recording scene in any of three ways, first under one's own name, as part of a band, or as a hired hand, a studio musician who becomes in-demand by producers and fellow artists for making distinctive contributions to other people's records. There are quite a few guitarists in the latter category, first-call players who turn up on dozens of records a year, but rarely have their name on the front page of a CD booklet. However, over the years, most of the best-known studio guitarists have tried their hand at one or more solo albums, with some becoming established as solo artists in their own right. Names like Larry Carlton, Albert Lee, Lee Ritenour, and Robben Ford come to mind, along with the granddaddy of studio guitar luminaries Chet Atkins, whose own solo albums go back to the 1950s.

This week we have another example, the latest release by Carl Verheyen called Slang Justice.

Solo albums by rock studio guitarists tend to share some characteristics: they usually feature several different styles to illustrate the players' versatility and wide-ranging musical interests; the compositions tend to be written to put the guitar at center stage; and usually the guitarist tries to sing, which to put it charitably, can show how good a guitarist he or she is. Carl Verheyen's new album is very much in this mold, though like Robben Ford, Verheyen is a decent and rather likable vocalist. Still the emphasis is on guitar, and Verheyen tries styles ranging from all-out rock, to a generous portion of blues, to funk, to acoustic folk. The result is a tasteful, enjoyable record that will especially please guitar fans, but should find an audience among those who appreciate good tradition-steeped rock that emphasizes the music more than the words.

Verheyen became established after spending some time with Supertramp, a popular and sophisticated band from the 1970s. But since then he has been keeping busy on the Los Angeles studio scene. He has released two previous solo albums, the first of which dates back to 1988. Both won praise in the pages of the guitar-oriented magazines.

This new release is typically stylistically diverse, but if I had one quick phrase to describe it, "blues-rock" would come to mind most readily. Verheyen is joined by a standard four-piece rock band, with keyboards played by another frequently-heard studio musician, Jim Cox, plus alternating drummers John Ferraro or Steve Di Stanislao, and bassist Dave Marrotta. The material is all original except for one Muddy Waters tune. Most is vocal, though the strongest portions are the instrumental, either as non-vocal tracks or the instrumental parts of songs. Lyrically, Verheyen poses no threat to Suzanne Vega or John Gorka's wordcraft. But this is, after all a guitar album, and Verheyen delivers on that count, proving he has taste as well as technique.

Many may find Slang Justice somewhat reminiscent of Robben Ford's recent work with his group The Blue Line. Both have a similar relaxed tenor voice, both feature the blues as a major component in their in the style, and both are excellent players who bring a kind of jazzy harmonic sophistication to the blues that takes it out of the three-chord realm and more in the direction of jazz-rock fusion. Verheyen often brings a funkier beat into his blues than Ford. But overall, Robben Ford's fans will likely find common ground with Verheyen's Slang Justice.

The album begins with one of those funky bluesy tracks, Down Like Hail, which shows Verheyen's band to be a tight musical unit. <<>> The highlight for guitar fans, of course, comes on his solo which combines laconic bluesy bends with flurries of high-precision runs. <<>>

Also in the straight-out blues category is Jet Plane Blues, a classic-style slow tune, also featuring some impressive guitar work. While the old bluesmen used to sing of hopping a train, Verheyen seems to have penned a blues for jet-setters. <<>>

The first of the instrumentals is the album's lengthiest track, a piece called Spooky Herbert. Again, the beat is funky and Verheyen gets a good chance to put his guitar to work, highlighting his trademark combination of bluesy bends and fast runs tossed off nonchalantly. <<>> Jim Cox also gets a chance for a good solo on organ as well. <<>>

One of the most interesting tracks is Passing Through. Musically the piece is a sophisticated cross between the influence of Allman Brothers and Yes. The outstanding musical composition and fine playing more than compensates for the words, which sound as if they were constructed by drawing rock lyric clichés out of a hat. <<>>

The one cover tune on the CD is also a blues. Two Trains Running by Muddy Waters starts with the basic Chicago blues style, but then veers off on a more musically complex tangent with interesting key changes and the kind of jazzy sound that Robben Ford also brings to his blues. <<>>

The title piece, Slang Justice, tends toward country-rock, with Verheyen heard on both acoustic and electric guitar. <<>> Again, the most worthwhile part is the guitarist's solo on electric, which shows his formidable technique as well as his ability to play the right thing, rather than just showing off. <<>>

The album concludes with a pair of acoustic-dominated tracks, Silence Is Golden, parts one and two. The first is a solo folk-style song about an odd hermit-like character. <<>> The second part is an instrumental version with Verheyen bringing in his electric for some very nice results. <<>>

Carl Verheyen is another of those busy studio guitarists who has taken the time to come up with his own album. In this case, Slang Justice is his third in the past six years. While this album has much in common with the works of other studio guitar players who have made records under their own name, this one has much to recommend it. The material is tasteful, Verheyen is an impressive player who does not let his formidable technique get carried away, and the backing musicians on this CD form a very cohesive band. About the only drawback are the original lyrics which are generally forgettable.

The album's technical quality is also first-rate. The mix is admirably clean and not over-processed. And though it may take a couple of listens to realize it, the combination lots of little things done right in the studio makes this a very good sounding CD.

Rock guitar fans will probably be Carl Verheyen's biggest audience for this CD, but the album should have wide appeal to those who like some good tasteful bluesy music with a sophisticated touch.