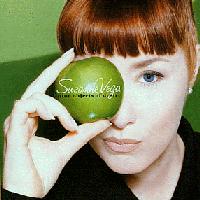 The fact that singer-songwriters are experiencing as much popularity as they are these days is due in large part to unexpected hits in the late 1980s by two women who would become the vanguard of the so-called "new folk" scene, Tracy Chapman and Suzanne Vega. While folkies never went away since the 1960s, Chapman and Vega's commercial success through songs like Fast Car and Luka helped to pave the way for a great number of fine artists whose work might not otherwise have received the attention it has. After a recent period when alternative rock grunge seemed to push articulate songwriters off the pop charts, Ms. Chapman has found renewed success with on her most recent album. And now, after four years, Ms. Vega is out with her fifth release entitled Nine Objects of Desire.

Ms. Vega's story is a fascinating one. She grew up in New York thinking she was Latino, before discovering that her father was not who she thought she was. Her parents were classic Bohemians, politically involved and artistically inclined, supporting Suzanne's efforts in the arts, including dance and music. She had started writing songs by her teens, and gradually worked her way into the active New York folk scene. Her eponymous 1985 debut release was an outstanding work that quickly won the attention of many critics, with her poetic songs, airy voice, and waif-like persona. In 1987, her song Luka, a deceptively happy-sounding tune about an abused child, a track from her second album Solitude Standing, became a suprise hit, and established her on the pop scene as well as among folk fans.

Four years ago, she threw her fans for a loop with the album 99.9 Fdeg.. While her wordcraft was at her folky and poetic best, she combined it with unusual sonic treatments, weird mechanical-sounding percussion that hinted at so-called industrial music, some hip-hop rhythms and a sound mix that purposely gave an unsettling quality to the music, sometimes being at odds with the content of the songs.

Her producer for 99.9 Fdeg. was Mitchell Froom, a West Coast-based keyboard man who on his own albums had been experimenting with this curious sonic approach. Since then, he has also worked with Los Lobos, giving their two most recent album a similarly dark quality, and English singer-songwiter Richard Thompson, along with alternative groups like Soul Coughing.

In the four years since Ms. Vega's last album, events took place that came to shape her new release. After working with Froom in the studio on a strictly professional basis, as she describes it, the relationship led to their marriage last year, and to a daughter named Ruby. They are two of the "objects of desire" alluded to in the title, and each gets two of the dozen songs. Another theme that got two songs was the subject of death. Her notes in the CD booklet describe the others as Lolita, Froom's teenage daughter from a previous marriage, plus "three men, one woman and a plum." Beginning her family was one reason the album took the 37-year old Vega as long as it did to bring it to fruition.

Naturally, Ms. Vega and Froom continue their collaboration, and Froom again casts his sonic eccentricities on this record. But in some ways this album is more mellow in mood than 99.9 Fdeg.. She herself describes it as "less defiant." She also allows herself to bring in some of the Latin rhythms she enjoyed so much growing up. And there are tips of the hat to performers of past decades. She mentions Julie London and Astrud Gilberto as influences in her making of this record. Lyrically, the album is fascinating, with each song seeming a riddle until its meaning becomes clear. Married life and family have entered her songs in a significant way.

Once again, Jerry Marotta provides the vaguely exotic percussion which has become a trademark of Vega and Froom's collaboration. It's mostly acoustic percussion instruments that are processed sonically to make them sound even more odd. Also appearing are drummer Peter Thomas, bassist Bruce Thomas, guitarist Steve Donelly, and of course Froom on the keyboards and sonic treatments. While this album does encompass more influences and stylistic approaches than its predecessor, Froom's quirky production, especially after similarly treated albums by Los Lobos and Richard Thompson, has lost its novelty. Sometimes it adds an interesting twist, but it can also occasionally get in the way of the songs, and grow tiresome after a while.

The album begins with perhaps its most unsettling song. Birth-day (Love Made Real) is in fact about childbirth, and the arrival of Ruby. The pain of labor is reflected in frantic middle section of the track. <<>>

A song more reminiscent of the Suzanne Vega of the past is Headshots. Of the cryptic lyrics, Vega explains that the piece was inspired by posters put up in her neighborhood by a photographer looking for work. Froom and company give the tune a kind of retro sonic touch, inspired by the Beatles at times. <<>>

One of the songs with Latin influence is Caramel, which serves as a metaphor for, in Ms. Vega's words, "the thing you long for, but you shouldn't really touch." It's a very nice piece of writing. <<>>

One of two songs about the "figure of death," as she decribes one of those objects of desire, is The Thin Man. Again, there is a Latin influence providing the backing for her skillfully metaphorical lyrics. <<>>

Suzanne Vega makes the transition from the Bohemian to the concerned parent on the song Lolita, inspired by Froom's teenage daughter, and thoughts about Ruby in the years ahead. The quirky Latin-influenced tune basically says to young girls stay off the street and keep out of trouble. <<>>

One of the straight out love songs, in this case for her young daughter, is World Before Columbus. Again one can hear the Sergeant Pepper's sonic influence in parts. In an interview, Ms. Vega explains the inspiration for the lyrics. She was playing with her daughter and cat, when the cat scratched Ms. Vega in the eye, which got irritated enough to require the wearing of a patch over one eye for a few days. Without her depth perception, the world looked very flat to her. Being without her daughter, or for that matter, the object of one's love, would make the world seem flat. <<>>

Ms. Vega says her producer-husband was a bit embarrassed for a while by Honeymoon Suite, which deals with their honeymoon night. It's one of the album's most appealing and interesting pieces, with its almost circus-like accompaniment that works well with the lyrical line. <<>>

The other song about death is appropriately entitled Tombstone, and it's another of the album's highlights. There's a bit of a hip-hop rhythm to which is added a jumble of retro sounds. <<>>

The album ends with My Favorite Plum, another sonic curiosity. The plum is a metaphor for another object of desire, the sometimes unobtainable. It features a string arrangements, along with another motley collection of instrumental sounds that hint at old mid-1960s pop records. <<>>

Suzanne Vega's new fifth album Nine Objects of Desire is both a continuation of her 1992 release 99.9 Fdeg. and an extension beyond it. Lyrically, this short record of a dozen songs reflects her own changed status, married with a young child, and musically, a desire to bring in some styles that influenced her at a young age. Once again, her lyric-writing proves why she remains in the vanguard of the new generation of folkies, while stylistically, the album seems to resist the folk genre. Mitchell Froom's quirky sonic production, aided by engineer Tchad Blake, is interesting the first few listens, but it does wear thin, especially after such a similar approach on 99.9 Fdeg.. The album often conveys the sonic equivalent of those annoying grainy black and white music videos. Sometimes it can be effective, but just as often it can detract. I especially dislike the quality of the reverb on Ms Vega's vocals, an effect that Froom and Blake have also added on Richard Thompson's and Los Lobos' most recent albums. The vocals reminds me of listening to someone in a public restroom while your ears stuffed up from a cold. An audiophile recording this is not, but some of the sonic mutations, including filtering and extreme compression on the instruments can be creative in spots. I just hope that next time, Ms. Vega and Froom try some other sonic approach.

Suzanne Vega's Nine Objects of Desire has some of her finest writing ever, but as an overall record is probably not her best.