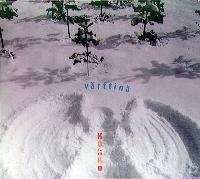 If there is one area of music in 1996 that can provide listening that's novel to the point of being fun, it's the growing field of world music amalgams. Artists have been bringing together various, usually unlikely styles and cultures, cooking them in end-of-20th Century technology and coming up with sound that range from the sublime to the ridiculous. In that respect sometimes the results are the opposite of expectations. We have seen clever blends of Celtic and African, Middle-Eastern and hip-hop, Eastern European and jazz scat singing, and Australian digeridoo mixed with just about everything.

This week we have the latest album by an eclectic band from up North, specifically from Finland, who incorporate their country's folk music with high-tech pop for a surprisingly appealing blend that is both almost danceable and musically absorbing. The group is Värttinä, and their latest CD is entitled Kokko.

Värttinä started out fifteen years ago as a large, young traditional folk music group. The original lineup was 21 pieces, but over the years, group members have come and gone, with many dropping out to pursue real-world careers. In 1990, after several departures, Värttinä, which had been specializing in the music of the Karelia region of southern Finland, more or less re-invented itself, absorbing several new musicians with wide-ranging backgrounds, including rock. The current lineup has ten members, with four women providing the vocals in a style that shows Eastern European influence. The are joined by instrumentation that includes the kantele, a traditional Finnish instrument, along with guitar, accordion, percussion, violin and bouzouki, and sax. And on this CD, they also bring in hip-hop-style drum loops and electronic percussion.

I say "almost danceable" since Värttinä also favors the Eastern European tradition of complex, irregular meters or polyrhythms that often change back and forth to more conventional beats. The female chorus vocals are given their distinctly Eastern European flavor by their sharp-edged style of singing, often with minimal harmonies. Instrumentally, they can sometimes hint at Irish and Celtic sounds. Despite the complexity, the group has a strong pop sensibility. The result has been described as "ABBA meets Fairport Convention and La Mystere des Voix Bulgares." It's an interesting mix that shows that World Music can also be fun. Kokko is their fourth US release. Their last album from two years ago also won a lot of praise.

Värttinä shows their roots by basing many of their compositions on traditional folk songs. Though they sing in Finnish, full translations are provided in the CD booklet. Most of the lyrics are the stuff of traditional folk from either side of the Atlantic -- love and loneliness, along with numerous allusions to animals, the sky and the weather.

This relatively short 41-minute CD begins with a track epitomizing the eclectic blend Värttinä represents. Tuulita Tuleva is an appealing blend of Western pop sensibility with Eastern European and Nordic folk. The song's lyrics say "All I ask is a single friend, a companion by my side" and calls on the wind to bring him to her. The instrumentation is also East meets West, with the pop-style percussion with the more folk-oriented string instruments. <<>>

The title piece, Kokko also features lyrics that revolve around the wind, in this case carrying a bird, which then becomes a metaphor for the lyric narrator, who says "I was born to soar on high, to travel to distant lands, but the wind carried me afar, on this side of the north wind." <<>>

The song Korppi is given an almost funky beat, with the drum machine pattern playing a line that could be used for hip-hop, beneath the airy folk-influenced arrangement. The lyrics here again have a bird as the central character, in this case looking for a raven to take away the sorrow of homesickness. <<>> Toward the end, the group gets an unexpected jazzy touch with a soprano sax making an appearance. <<>>

One of the most fascinating pieces on the album is its sole instrumental. Pyry combines the Nordic folk sound with Eastern polyrhythms and some distinctly Celtic influence. <<>>

Another unusual track is Iro, which sounds like Nordic dancehall or maybe a Bulgarian macarena. The lyrics are a classic old folk tale. Iro was a woman born in a forest, lacking in beauty, and unable to find a suitable husband. The story just ends there. <<>>

One the most musically fascinating pieces is Merten Kosijat, with more lyrics about forests and unrequited love. In this case, a woman looking for a true love, finding a man of iron and spurning him. The combination of stylistic influences that come together on this piece is fascinating, from the complex rhythm of the verse to the jazzy horns. <<>>

Alternating between the rhythmic feel of a Sting tune, and a kind of funky Celtic reel is Omani, whose premise is regret at one's lover being far away. <<>>

The album ends with Emoni Ennen, which roughly translated is "my mother sang," a series of childhood reminiscences. It's an acapella piece that recalls the sound the Bulgarian Women Chorus on the Les Voix Bulgares albums, only at a pace more like the rapid fire rapping of reggae dancehall. <<>>

Kokko the new album by the ten member Finnish group Värttinä is another of those fascinating and fun world music conglomerations that brings together an unlikely mix of styles and cultures in a manner that is both creative and appealing. The group, for all their eclecticism, has a very good knack for what makes good pop music. Their bright vocals, and infectious, though sometimes complex rhythms, and their ease with borrowing everything from traditional Finnish folk to hip-hop makes Värttinä likely to appeal to wider audience than many World Music releases. And their sound, once heard, is instantly recognizable. Their composing and arranging is first-rate, and they like to add an element of musical surprise to each piece.

Sonically, the album is nicely handled. It's mixed like a pop album, with a fair amount of compression, and occasional electronic effects. Sometimes the group vocals can sound a little thin or lacking in warmth, but overall, the sound and production, with Janne Havisto in the producer's chair in this recording made in Helsinki, makes for a good auditory experience.

Trying to come up with a quick phrase to describe Värttinä's music or another group to compare them to is not easy. And that's what originality is all about. The fact that's it's as appealing as it is, makes it even more notable. It's World Music at its eclectic best.