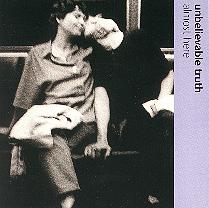 Since the 1960s, Britain has been the source of innumerable pop bands. Fads seem to move at a faster pace over there than on this side of the Atlantic. While the UK has been the source of some significant and durable performers from the Beatles to Elvis Costello to Sting, probably better than 90% of the groups appearing are just riding the latest trend and are quickly forgotten.

This seems to be an especially prolific period for Brit-pop bands, at least as far as US album releases are concerned. The latest fad, spawning dozens of followers, seems to be groups that combine attempted melodic vocals with extra-grungy guitars. To a long-time observer, all these trend-surfing UK bands have a dreary similarity. The waves of fads seem to repeat themselves, covering the same ground with slightly different casts of characters. Of course, these groups do find their audience among those with shorter memories.

This week we have the US debut of a Brit-pop band that eschews the current fads and makes really tasteful, thoughtful music that could still find an audience among trend riders. The band is called Unbelievable Truth, and their CD bears the title Almost Here.

Unbelievable Truth is a trio which, in their sparse ruminating music, is reminiscent of the durable Scottish group The Blue Nile. The most prominent member is lead singer, guitarist and lyricist Andy Yorke, who is the brother of Thom Yorke of another notable Brit-pop band Radiohead. Multi-instrumentalists Nigel Powell and Jason Moulster comprise the rest of this Oxford, England based group, who dispense with almost all the trappings of alternative rock, leaving only a hint of cranked up guitars in the album's more dramatic crescendos. Otherwise, the record is dominated by acoustic and barely-amplified, folky electric guitars, non-synthesizer keyboards and a little string quartet. Yorke's vocals are airy and -- unlike most of the current-generation of Brit pop bands -- in-tune, with a distinctly melancholy quality. The songs cover lyrical ground that's been explored many times before, but Yorke's lyrics are nevertheless appealing, tasteful and add to the album's general rainy-day feeling. But it's the group's overall sound that sets it apart. The musicianship is remarkably tasteful throughout, the arrangements are quiet and often stripped down, but most of the songs make effective use of dynamics, rising from a whisper to some energetic moments. In some ways, I am reminded of a kind of low-key version of the first two U2 albums, as well as the Blue Nile. The have also been compared to a lugubrious sounding group on this side of the Atlantic, The American Music Club.

Unbelievable Truth's music is also greatly aided by the album's very effective, understated production, which enhances their introspective sound with the colors the sonic equivalent of sepia tones that can sometimes emerge into bright highlights.

Almost Here opens with a piece typical of the album as a whole. The song called Solved ruminates on problems presumably in personal relationships. In typical Unbelievable Truth fashion, the piece winds it way from a kind of whispered soliloquy to rocky pop. <<>>

Also with a sound that some have described as a kind of quiet desperation is Angel, a nicely done lost-love song. <<>>

One of the most interesting tracks on the album is Same Mistakes, which includes both the string section and some hints of the psychedelic days in some of the vocals. <<>>

Andy Yorke spent some time studying in Moscow, which could explain some of the moodiness of this album. There's also a bit of the indentifying chime used by Radio Moscow's short wave service in the introduction to the song called Building. <<>> The song itself is another good piece of writing and arranging, rising from dark introspection to a dramatic flourish. <<>>

A further highlight is Forget About Me, another angst-ridden set of lyrics in a musical setting that exemplifies the group's effective, tasteful musicianship. <<>>

Stripped to the barest minimum is the title piece Almost Here on which Yorke's vocals are accompanied only by an electric piano, with a set of lyrics that match the melancholy setting. <<>>

The album ends with Be Ready, another appealingly melodic song with a downcast mood featuring an oddly country-influenced guitar line. <<>>

Almost Here the US debut album by the British band Unbelievable Truth defies the stereotypical sound of 1990s Brit-pop with their first class vocals, spare instrumentation and tasteful arrangements. Dark-hued music like this could easily have gone too far and just been depressing, but Andy Yorke's appealing singing and the group's arrangements that generally add a positive, often optimistic quality to the songs that provide for a nice balance with the bittersweet. This is definitely not party music, but Unbelievable Truth, whose name, by the way, comes from a film by Hal Hartley, creates musical textures that may be just right for a more contemplative mood.

Sonically, the album is also a class act. The production and sound are excellent. The sparse production is unfettered my any audio trendiness like drums samples or quirky vocal treatments. And the dynamic range is gloriously wide, with the album running from delicate pianissimos to full-tilt rock, without an effort to squash it into all the same (maximum) volume that seems to be the trend among the large corporate labels. Band member Nigel Powell serves as producer, with Jeremy Wheatley principal engineer.

Most of today's Brit-pop is depressingly disposable. Unbelievable Truth have created a durable record to which you're likely to keep coming back.