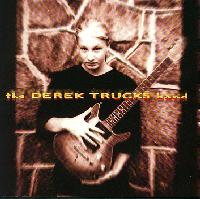 Musical prodigies are a perennial phenomenon. Kids with abilities seemingly beyond their years have been noted going back centuries, with Wolfgang Amadeus Mozart being history's most famous example. In the rock era, performers achieving fame at an early age range from teen rock stars of the 1950s though Stevie Wonder and Steve Winwood, to singer-songwriter Janis Ian to banjo virtuoso Béla Fleck, who emerged with his debut album while he was still in his teens. The guitar provides fertile grounds for youthful players to make their mark. Some have been flashes in the pan, while other including Eric Clapton and Richard Thompson have had durable and respected careers after starting at an early age.

Lately, there have been some teenaged blues guitarists who have been attracting attention, including Johnny Lang and "Monster" Mike Welch. This week we have another teenager to emerge as a formidable blues-influenced guitarist with a very impressive debut album. Eighteen-year-old Derek Trucks has released a recording called The Derek Trucks Band.

Jacksonville, Florida, native Derek Trucks came to music naturally through his family. His uncle, drummer Butch Trucks, is a founding member of the Allman Brothers Band. Derek played his first professional gig at age 11, and soon began attracting attention with his band. It waasn't long before they were opening for and occasionally jamming with prominent acts such as Bob Dylan, Buddy Guy, Widespread Panic and the Gregg Allman Band. More recently, Trucks has been featured as a sideman or guest soloist on CDs by Junior Wells, Clarence Gatemouth Brown and Col. Bruce Hampton with the Fiji Warriors.

While Trucks plays with a bluesy slide guitar technique, he draws his influences from a wide circle, citing everybody from bluesman Howlin' Wolf to jazz iconoclast Sun Ra. Indeed, his debut album shows a surprising degree of jazz influence -- all the cover tunes on the record are jazz standards by John Coltrane, Wayne Shorter, and Miles Davis. Now based in Atlanta, Trucks heads a mostly-instrumental quartet including keyboard man and occasional vocalist Bill McKay, drummer Yonrico Scott and six-string-bassist Todd Smallie. All are very capable, tasteful players who serve up an interesting and hard-to-categorize blend of jazz-rock fusion, blues, straight-ahead rock and a little funk. And though this is Trucks' album, each of the other band members gets ample solo opportunities, and each proves his mettle. Unlike many of the young hotshots, Trucks does not attempt to impress through sheer technique and flash, but immediately comes across as a mature player who seeks to innovate through his eclecticism as much as anything else.

There is a saying about the music of Mozart that I think could equally apply to blues or jazz standards, and that is it is best played either by the very young or the most experienced, venerable musicians. The kids approach the music with an innocent charm or with the cocky self-assuredness of a teenager who is sure that he knows much more than any adult could possibly know about music. That is soon replaced with the realization of how much there is still much to learn. Finally with age and experience comes grace and authority, which only the older musician brings to performances of say, Mozart, the blues or jazz standards.

Derek Trucks still has the teenager's chutzpah that would lead him to attempt John Coltrane and Miles Davis on a slide guitar, but he already has enough experience and taste to make it come off remarkably well. The result is a very satisfying album with some impressive musicianship, and perhaps a surprise or two.

The Derek Truck Band was produced by long-time producer John Snyder, who has worked with people like Etta James, Dizzy Gillespie, and Ornette Coleman over the years. Perhaps it was Synder who helped to cultivate some of the album's interesting jazz influence. He undoubtedly encouraged this album's great sense of good taste, which is all the more impressive from as young a picker as Trucks still is.

The album is framed by two short pieces played by Trucks on the Indian string instrument the sarod, which provide a slightly exotic prelude, and postscript to the recording... <<>> ...before the group launches into a John Coltrane composition called Mr. PC, which Trucks and company reshape into a kind of supercharged Southern rock boogie. It works surprisingly well. <<>>

That is followed by 555 Lake, one of the original tunes, written by all of the band members, and the CD's only vocal, sung by Colorado native keyboard man Bill McKay. The funky, Southern-rock tinged piece is reminiscent of the recent work of Col. Bruce Hampton with the Aquarium Rescue Unit band. <<>> There is a short guest appearance by trumpet player Gary Gazway, throwing a further twist into the musical equation. <<>>

Gazway also appears on another jazz standard, Wayne Shorter's Footprints. Again, the result is a pleasant surprise, though the arrangement, featuring the slide guitar recalls jazz guitarist Bill Frisell's work. The rhythm section really gets the jazz feel right, while Trucks wails for all he's worth. <<>>

It is said that the test of any blues guitarist is how well he or she does a slow blues. Trucks and Band do an original slow piece called D Minor Blues, and give it a lot of class. McKay's Hammond organ and Trucks' tone and style reminds me at times of the Santana band. <<>>

Another good example of the Derek Trucks Band's interesting mixture of Southern rock and jazz comes on an original tune called Out of Madness, which starts out reminiscent one of Allman Brothers or Sea Level <<>> before picking up on a latin lilt in its rhythm. <<>>

Perhaps the most fascinating treatment of a jazz tune comes on John Coltrane's classic ballad Naima. Trucks and company transform it into a slinky bluesy funky Southern-rock influenced arrangement with Trucks playing slide-style guitar throughout. Some Coltrane acolytes might shudder at this transmogrification, but I think it's quite creative and features some of the band's best playing. <<>>

On the other hand, one cover of a jazz standard that does not work well is Miles Davis' So What. Trucks and his band take the tune in a slightly latin direction á la Santana, but the tempo and rhythmic feel are leaden. Here Trucks' youthful inexperience becomes apparent in the arrangement's inability to swing. <<>>

But a slow, plodding tempo is put to effective use on the following piece, Evil Clown, which is well-named with its combination of circus motifs and low-down and sinister-sounding riffs. <<>>

The band does catch fire and swing on an original by Trucks, Smallie and another collaborator entitled Egg 15. It's first-rate jazz-rock fusion featuring some classy playing, including Trucks' curiously laconic solo. <<>>

The album called The Derek Trucks Band marks the very impressive recorded debut by the eighteen-year-old guitarist namesake. Trucks, who has already appeared on several albums as a sideman, embodies an interesting juxtaposition of musical taste and maturity, with teenage hubris in tackling jazz standards that an older musician might treat with a kind of reverence. Trucks and his excellent band plunge in, engaging in such heresy as giving Coltrane a Southern rock boogie treatment on slide guitar, and for the most part, the results are interesting and satisfying. The original material, written usually in combination with his band members, is uniformly first class. The result is something that certainly gives one hope for the future generation in music.

In production and sound quality, this album is also a class act. John Snyder's production brings out the best in the band, and the mix by veteran Southern rock producer-engineer Johnny Sandlin is outstanding, using the technical tools of the studio tastefully and effectively to enhance the music, rather than to distract from it. There is also a good dynamic range, something that is getting to be a rarity these days.

Musical prodigies have been with us for a long time, and guitarist Derek Trucks proves to be an outstanding player regardless of age. One wonders what he'll be like ten or fifteen years from now.