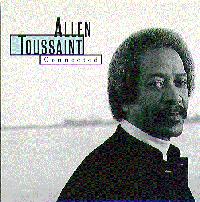 New Orleans has perhaps the richest musical tradition of any American community. The acknowledged birthplace of jazz, the Crescent City has a remarkable mix of ethnic influences that came together in a wonderful cultural melting pot manifesting itself through the its music. In addition to jazz, another interesting and durable tradition has been that of the New Orleans piano "professor." Starting in the barrelhouses and places of even lower repute, piano players provided entertainment often by themselves in places that required music in high spirits. Though there have been many such pianists, the most influential was the late Henry Roeland Byrd, better known as Professor Longhair, who combined ragtime, jazz, plus Latin American rumba in a style with an irresistible syncopated beat marked by a rolling left hand and bluesy glides played with his right. In his footsteps came perhaps the most popular, Fats Domino, and Mac Rebennack, better known as Dr. John. These pianists, going back to Professor Longhair, have also been involved in a lively recording scene that spawned many R&B hits over the years. Dr. John especially, remains a busy studio musician.

Another gentlemen who has worked extensively on the recording scene in New Orleans and plays piano in the city's great tradition is Allen Toussaint, who has just released Connected, his first new solo album in nearly twenty years.

Allen Toussaint has been making records for almost four decades. The New Orleans native got an early break when, at age 17, he was given a job by producer Dave Bartholomew to play piano parts on a Fats Domino record when Domino himself was on the road. Since then, Toussaint has spent much of his career in the recording studio playing on, composing, and producing many hits over the years for such artists as Ernie K-Doe, Irma Thomas, Aaron Neville and Lee Dorsey. He recorded his own first album in 1958. Two of its instrumental tunes became hits when covered by others, including Whipped Cream, which reached the upper levels of the pop charts with Herb Alpert and the Tijuana Brass in the early 1960s. Other of Toussaint's compositions include Fortune Teller, which was covered by the Rolling Stones, and the Lee Dorsey hit Working in a Coal Mine, which was also a hit for Devo. His arrangements were part of The Band's albums Rock of Ages and Cahoots. And Toussaint's own musical efforts together with the Neville Brothers gave rise to the legendary Meters band.

Since the early 1970s, Toussaint has also been a recording studio owner, operating Sea-Saint Studios, where many a classic album has been recorded.

Now, after an extended period of working more or less behind the scenes, with occasional solo tours, Toussaint is out with a fine new recording that puts him in an easy-going New Orleans R&B-steeped setting that reminds us of how charming and classy a performer he can be when he steps out front. He creates some finger-popping songs and instrumentals that are timeless in sound, though occasionally with rather contemporary lyrics. His Crescent City piano is front and center, and he is joined by a first-rate band of similar caliber. The songs run the gamut from the humorous to one of those fun nonsensical sets of lyrics, to some thoughtful social commentary. Stylistically they span infectious R&B grooves, to ballads that border on so-called "easy-listening" pop, to funky instrumentals that recall a piano version of organist Booker T and the MGs.

The album was recorded over a period of two years in Toussaint's own studio, co-produced by the artist and engineer Clarence "Reginald" Toussaint. The variable band most often includes guitarist Scott Goudeau, and bassists Chris Severin and Roland Guerin. The rest of the personnel changes from track to track, and often includes classic soul-style backup singers and horns.

The CD commences with a piece which epitomizes the New Orleans sound of Connected. Pure Uncut Love has Toussaint playing Professor Longhair-style piano lines, while his easy-going vocals have lots of appeal. <<>>

Another tune dripping with Crescent City influence is Do the Do, and it's a highlight of the album. The arrangement is a classic with the backing vocals and Toussaint's piano driving this performance that makes it hard to sit still. <<>>

There are four mostly funky instrumentals among the 15 tracks on Connected. The first is called Get Out of My Life Woman, which recalls the Memphis school of R&B in its sound. <<>>

There are two songs with what I suppose could be called a little world music influence. Ahya has lyrics that manage to a combine celebration of diversity with a little old fashioned patriotism. Stylistically it's a bit of a change of pace, but also quite enjoyable with its combination of a catchy tune, the appearances by the horn players, and the thoroughly positive words. <<>>

In the same stylistic vein is Aign Nyee, and which flips between a vaguely African ambience and a very funky section. <<>>

Most of this album could have been made anytime in the past twenty years or so. But there is one very contemporary set of lyrics. Computer Lady is a fun novelty song about cyber-romance. <<>>

There are a couple of ballads that pour on a little too much sugar. Sweet Dreams as a song, is a very nice lullaby, but the arrangement, with Tricia Boutte doing co-lead vocal seems a bit out of place on an otherwise honest and unpretentious album. <<>>

Much more successful is In Your Love, another fine song whose performance has more of a classic soul ballad sound. <<>>

Also a standout track is Oh My, which features a guest appearance on trumpet by Dave Bartholomew, Toussaint's old mentor. Again, it's Toussaint doing what he does best. <<>>

Allen Toussaint's new album Connected, his first under his own name in nearly two decades, is a fine recording highlighting both his songwriting and his appealingly breezy performing style that epitomizes the New Orleans tradition. The songs have the makings of classic R&B hits, though frankly, in this day and age, music with this much integrity has virtually no chance to hit the top of the charts. While there are a couple of tracks that do fall a bit short, Connected is a great reminder of why Toussaint is such an institution in the Crescent City. The CD is full of music will stand the test of time, current pop charts notwithstanding. With so much renewed interest in the blues world for the veteran performers, the time is right for Toussaint to make a grand re-entrance on the recording scene with his own album. He does it with his usual musical savvy, and with charm and grace that just seem to improve as time passes.

Sonically, the album is well-recorded. Though not the ultimate audiophile recording, the mix is ideal for the music, with a good solid sound and a blissful ignorance of faddish studio trends.

There are probably a lot of people over the years who, in reading the liner notes of albums have seen Allen Toussaint's name. Now we can hear him again out front, and making music on his own terms -- in his own recording studio, and on a new record label he co-founded.