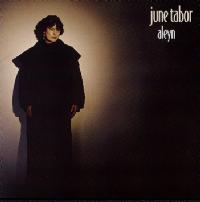 The English folk scene that became popular in the 1960s has proven to be quite durable. Most of the performers and bands who started the scene are still active, and many are doing some of their best work. One of the most notable facets of the style is role played by some distinctive women vocalists. The achetype was the late Sandy Denny of Fairport Convention, with her smoky alto that for me somehow always seemed to evoke misty castles from a bygone era. Each of the three pioneering groups in genre, Fairport, Steeleye Span and the Pentangle each had a lead vocalist with a memorable voice. In addition to Ms. Denny with Fairport, there is Maddy Prior of Steeleye Span and Jacqui McShee of the Pentangle. Other female English folk vocalists would appear: Linda Thompson, Norma Waterson, also Annie Haslam of Renaissance, which sometimes got folky between their excursions into symphonic rock, and June Tabor.

June Tabor has just released a new recording, her twelfth by one count, entitled Aleyn, her first under her own name in three years.

Ms. Tabor got her start singing traditional music in her teens, performing American folk songs like Michael Row the Boat Ashore which she learned from television. As she worked on her technique, she first took up the more ornamented traditional style, but while a student at Oxford, she found herself in a circle of folk musicians in which a more simple, unadorned style was more appropriate. This has become her trademark: a direct, remarkably-controlled vibrato-less alto with an amazing sense of pitch and a way of delivering a song that makes one's first encounter with her voice a moment not easily forgotten. Her style is an unusual dichotomy of a cool, almost detached sound, with not a particularly wide pitch range, but with the kind of subtle control that can turn out to have powerful emotional impact. And the quality of her voice, with its dark, smoky timbre reminiscent of Sandy Denny but lower in register, can easily transport one to another time and place.

Ms. Tabor first came to the attention of American audiences through an album she did in 1977 with Maddy Prior called Silly Sisters. Over the years, Tabor has done her own recordings, collaborated with guitarist Martin Simpson for several albums, and toured and recorded with a second-generation English folk-rock group called Oysterband. Other projects included a fine jazz record with pianist Huw Warren called Some Other Time from 1989. Two of her two most recent releases, Angel Tiger in 1992 and Against the Stream two years later, were masterpieces in her memorable style, which has attracted the attention of many songwriters. Elvis Costello wrote two songs specifically for Ms. Tabor, including All This Useless Beauty which was on Angel Tiger, and much later became the title track for one of Costello's own releases.

On Aleyn, Ms. Tabor serves up a generous collection of songs from various sources, including a bit more traditional material than she has done in the recent past, along with songs by composers such as Richard Thompson and Ralph McTell. She also does a Yiddish song from the early part of the century, from which the album's title, which translates as "Alone" was taken.

She is joined once again by a group providing the kind of stark, stripped-down instrumentation that gives her music such power. The eminently tasteful Huw Warren returns on piano and also on accordion. Also present are another accordionist Andy Cutting, violinist and violist Mark Emerson -- the viola adds to the ruminating quality of the arrangements -- bassist Dudley Phillips and saxophonist and clarinetist Mark Lockheart. The arrangements do not always use all the players. Sometimes the accompaniment can be just accordion for a surprising effect.

An interesting aspect of Aleyn was that it was recorded live before audiences in four locations, though it was not intended to sound like a live album. There are no reactions from the audience on the CD. Ms. Tabor and her producer John Ravenhall, felt that the spirit and "spark" of the music was captured best live before an audience.

The album begins with one of its most striking performances, a dark but powerful reading of Richard Thompson's The Great Valerio, with the accompaniment of diatonic accordion and viola. Ms. Tabor does amazing things with this already ruminating song. <<>>

Reminiscent of Ms. Tabor's jazz album with pianist Huw Warren is the performance of the traditional Celtic song I Wonder What's Keeping My Love Tonight. It's one of a couple of songs of unrequited or unfaithful love on this CD. <<>>

Bentley and Craig is a song by Ralph McTell, author of Streets of London. It's one of those protest songs of social injustice, in this case about two teenagers convicted of a crime in the 1950s with one unjustly being executed. Ms. Tabor and her group give the song the emotional impact that makes it a powerful performance. <<>>

Another of the traditional folk songs on the album is April Morning, whose lyrics complain about the unfaithfulness of men. Again the accordion and viola accompaniment is a perfect foil for Ms. Tabor's extraordinary voice. <<>>

Di Nakht is a Yiddish song written in 1929 in New York by two Eastern Eurpoean immigrants expressing loneliness. According to Ms. Tabor's notes, the song found its way back to the European Jewish ghettos during Nazi times. The first two lines of lyrics translate as "There's no one with me in the night / The night is alone with me." <<>>

A contrast to that is a bawdy old folk song called The Fair Maid of Islington, which is done in a medley with another traditional piece, the instrumental Under the Greenwood Tree. Ms. Tabor and company seem to relish this double-entendre-laden old ditty. <<>>

Ms. Tabor plays the torch singer on No Good at Love, which she and the group serve up as a subtle, tasteful tango. <<>>

Another traditional song is given a similarly smokey, melancholy treatment. Go from My Window, is basically about the rejection of a suitor. Ms. Tabor writes that the song has its origins in the 16th Century, but her treatment evokes the mid 20th Century. <<>>

One of the most delightful tracks is A Proper Sort of Gardener, written by one Maggie Holland. It's a small story about one man's garden and a child's experience there. Ms. Tabor's performance is just exquisite. <<>>

The album ends with Shallow Brown a slave shanty from the Caribbean. It starts acapella <<>> before the instrumentation enters gradually. <<>>

June Tabor's new album Aleyn is another remarkable recording from one of the most memorable voices to come from the English folk scene. Her haunting, dusky alto with subtle but often powerful delivery, is constantly winning accolades from all who have heard her, with many prominent artists being among her biggest fans. The new album continues her work with somewhat unusual instrumental accompaniment -- no guitars or percussion, and prominent use of accordion, by some very tasteful and musically compatible players. The material is an interesting mix of contemporary songs that she can make sound ancient, and very old traditional songs on which she can cast an unexpected light. The result is excellent listening.

Sonically, the album is also quite worthy. The fact that this was a live recording before audiences makes residual background noise a bit higher than it might have been in the studio, but the mix is outstanding, helping add to the CD's distinctive ambience. And for a change in this era of heavily-compressed CDs, there is a respectable sonic dynamic range that captures the performance's ebb and flow.

Though not as well known in the US as some of her colleagues, June Tabor has nevertheless been winning many fans with her singular vocals. Her new album Aleyn is one of the finest of her twenty-year career, and will hopefully introduce more listeners to this exceptional performer.