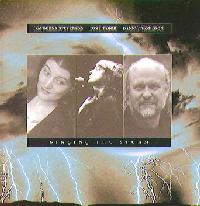 Back in the 1960s, among the dozens of other styles which appeared was something usually called English folk. It wasn't really done in traditional style. It usually involved electric instrumentation and as often as not, drew on American folk, blues and rock & roll for both inspiration and material. The groups who purveyed the style did draw on some elements of the traditional music of the British Isles, as they added their own eclectic blend of influences. Like so many of the seemingly obscure styles that came out of the 1960s, English folk is still around, after fading somewhat from the scene during the latter 1970s and into the 1980s. All three of the principal groups who established the genre, Fairport Convention, Steeleye Span and the Pentangle, are still around in one form or another.

One of the trademark features of English folk, which probably happened more by coincidence rather than by design, was the leading role taken by distinctive female lead vocalists. Though Jacqui McShee of the Pentangle sings in the soprano range, the style has given rise to a handful of smoky-voiced altos who seemed to have an ability evoke ancient misty castles with the sound of their voices. The late Sandy Denny of Fairport Convention was the archetype, but Maddy Prior of Steeleye Span, and later on Linda Thompson and June Tabor have carried on the tradition. This week we have an album featuring Ms. Tabor, who I think has become the finest living voice in the now venerable style. It's an interesting collaboration with harpist Savourna Stevenson and bassist and Pentangle-founder Danny Thompson called Singing the Storm.

June Tabor came to the attention of American audience through a widely acclaimed joint album with Maddy Prior released around 1976 called Silly Sisters. Since then, Ms Tabor has worked with second generation electric English folk group The Oysterband, and recorded a series of solo albums, most vaguely in the English folk vein, but with one a superb jazz-oriented record with pianist Huw Warren. While Ms. Tabor is not a songwriter, she has attracted the attention of several, including Elvis Costello who wrote a song called All This Useless Beauty for her 1992 album Angel Tiger, which Costello only now recorded for his new album for which it is the title piece. Each time, Ms Tabor's recordings have been striking for her remarkable performances in that dusky vibrato-less alto voice with the impeccably subtle delivery.

On the new album Singing the Storm Savourna Stevenson is given first billing, with Ms. Tabor being but one of the trio performing Ms. Stevenson's compositions. Nevertheless, Tabor's voice dominates this memorable recording.

Savourna Stevenson is a Scottish harpist whose work has graced albums by the McGarrigle Sisters, Martin Carthy, and Alan Stivell among others. On this record, she mainly plays a what sounds like a concert harp, rather than a Celtic harp. She wrote the music to all the pieces, but enlists various lyricists for these works which were commissioned compositions created for a festival called the Borders Festival last year. They draw on traditional subject matter, including Scottish lore, history and romance put into a historical setting. What is striking about the songs is that like folk songs of old -- which provided entertainment before movies and television brought us of sex and violence -- the subject matter is often tragic, with characters meeting their demise, while the musical setting can be absolutely gorgeous, with the beautiful harp, the rich acoustic bass of Danny Thompson and Ms. Tabor's amazingly artful vocals. The result is a singular listening experience. Ms. Tabor's recent albums have shown her to be at her best in a spare acoustic setting. Singing the Storm with just the harp, acoustic bass and vocals is all the more arresting. And with many of the songs' lyrics set in antiquity, Ms. Tabor's voice couldn't have been a better choice.

Ms. Stevenson is a fine player and her approach quite eclectic. While one might expect, with some of the songs set in ancient Scotland, a fair amount of Celtic influence, Ms. Stevenson is at least as likely to draw on jazz and even new age for inspiration as anything else. There are also a couple of pieces that, upon close listening, reveal a bit of funky rhythmic undercurrent. This is not a record that is a stereotype of any style, and yet despite its expeditions into new territories, it has a wonderfully warm, attractive sound.

The album begins with a piece called The Baker, with lyrics by Liz Lockhead. The song had as its inspiration elegies for both Ms. Stevenson's parents. English legend has it that a chimney sweep is good luck for a wedding party. So the thought occurred to her, who would be good luck for a funeral? The baker, preparing refreshments for the sad gathering proved to fill the bill. The performance conveys some of the melancholia in the lyrics, while at the same time maintaining a very pretty sound. This is the gist of the album's wonderful dichotomy. <<>>

The title piece Singing the Storm is a tragic story of a girl getting lost and presumably dying in a snowstorm. The breathtaking beauty of the performance belies the very sad lyrics. <<>>

A great piece of folklore comes on another highlight of the album, The Witch of Fauldshope, based on a legend of a wizard in the Scottish Borders region, who meets his match. The arrangement takes a the form a jazzy waltz. <<>>

Another notable instrumental is The Gypsy Queen, which features a nice violin performance by an uncredited musician. <<>>

An interesting lyrical twist comes Maybe Then I'll Be a Rose. Old British Isles folksongs are full of stories of star-crossed lovers who seem to unite only in death. That is given as a warning to keep a present love from coming undone. The musical setting has the air of a jazzy ballad, which Ms. Tabor can deliver with real elegance. Les Barker, who wrote the words for The Witch of Fauldshope also penned these lyrics to Ms. Stevenson's music. <<>>

The album ends with two pieces featuring lyrics set in old Scotland. The Broom of Cowdenknowes, with lyrics by Ms. Stevenson herself, is full of dialectic phrases, and is presumably about a love affair taking place among the sheep pastures. <<>>

The final selection is another tragic story in an attractive musical setting. The piece is called Jean Gordon, and it's a historical tale of a Gypsy woman in early 18th Century Scotland who is persecuted, with five of her sons being hanged, while she maintains a defiant attitude. <<>>

You can probably tell by now that I am a fan of June Tabor's vocals. She is the epitome of the English folk-style singers, with her dark, but flawless alto, free from vibrato, and remarkably subtle in her interpretations of songs. This new album, with the music and harp of Savourna Stevenson and the rich, acoustic bass of Danny Thompson is a nearly perfect match. Ms. Stevenson is a fine player and composer, easily absorbing a wide range of influences and weaving them into her music, again in artful sophisticated ways. The lyrics, by a variety of collaborators, are also in keeping with the best British tradition, sometimes telling tragic stories with elegance. The result is a superb album with a musically spare, yet exceptionally sophisticated sound, from three masters of musical subtlety.

Sonically, the album is also first-rate. The acoustic instrumentation is well-recorded, with an intimate, up-close sound, with just a tasteful amount of reverb to fill things out. But neither the producer nor engineer are named in the CD booklet.

If you are a fan of the English folk sound going back to Fairport Convention with the late Sandy Denny, Singing the Storm by Savourna Stevenson, June Tabor and Danny Thompson will no doubt be a delight. And if you are are not yet familiar with June Tabor, you are in for a bit of a musical revelation. It's the kind of album that just grows better, and despite its ostensible instrumental simplicity, reveals something new at every hearing.