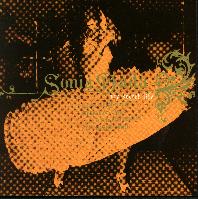 Some of the most satisfying and engaging music comes from artists and groups who slip between the stylistic cracks, creating music that borrows from various genres, often unrelated ones, and comes up with something new. Sometimes attempts at such a new stylistic hybrid can serve as a reminder of why the styles were separate in the first place. This often happens when the fusion of styles was forced. But it seems to me that some of the most worthwhile stylistic amalgams just happen organically, when people with different musical backgrounds get together to have some fun.

This week's album is another difficult-to-describe hybrid of sounds that grew out of the circumstances and personalities around the formation of the band. The group is Sonia Dada, and their new, third CD is entitled My Secret Life.

Sonia Dada got its start in 1990 when three guys were working as street musicians, actually subterranean singers, performing a mix of doo-wop, gospel and soul at their usual haunt at a subway station near a fast-food restaurant in Chicago. Guitarist and songwriter Dan Pritzger was greatly taken by the sound of the trio of Paris Delane, Michael Scott and Sam Hogan, and soon invited them to form a band with him. Pritzger had been working on his own music with some old friends of his, bassist Erik Scott, guitarist David Resnik and drummer Hank Guaglianone. Bringing in the trio of subway singers brought a whole new twist to the music, with a lot of influences coming together from blues to gospel to funk to folk to Beatlesisms. Rounding out the octet was keyboard man Chris Cameron. Sonia Dada's debut album appeared in 1992 and soon attracted attention, though as is typical for interesting music like that, the attention was mainly from outside the US. They become quite popular in Australia and have toured there extensively.

They followed their eponymous debut three years later in 1995 with A Day at the Beach which continued the group's interesting, eclectic and rhythmically infectious blend, adding a bit more of a funk beat and hints of more contemporary influences like drum loops.

Now they are out with their best album yet. Secret Life combines all the things Sonia Dada does, with first-rate musicianship and generous helpings of eclecticism. The album was produced by Pritzger and Barry Beckett, the keyboard man and arranger who was an important part of the fabled Muscle Shoals studio scene in the late 1960s and early 1970s. The group's sound remains as wide-ranging as ever, with its engaging combination of styles. But this album's particularly wide diversity, and the fact that the expansive arrangements work as well as they do makes Secret Life an album that really grabs one's attention, as the music runs from 60s psychedelic to 90s techno to Motown and Memphis soul to New Orleans groove with an undercurrent of gospel. Pritzger, who wrote all of the music on Secret Life, has come up with a worthy set that illustrates the group members' diverse musical backgrounds, and also enlists various guests including members of the Waters family of gospel music, the Jesse Dixon singers and the Memphis Horns. If there is one group that comes to mind in listening to Sonia Dada on this CD it's The Neville Brothers, from the spectrum of styles to the New Orleans beat. But Sonia Dada have their own trademarks.

Adding to the diversity of the album was the fact that it was recorded in various studios with different recording and mix engineers, each with their own approach. And with different people doing lead vocals, it almost sounds like several different groups all with a great groove. For some, that diversity could be a problem, but Sonia Dada manages to keep a kind of spiritual coherence to the record that ties it together. Pritzger's lyrics are often more than one would expect from good time music, often going into the realm of social commentary, and the arrangements can often do abrupt turns in the middle of a song for added effect.

One of the original trio of vocalists, Sam Hogan has left the Sonia Dada, more or less. But he turns up on several of the songs on the new CD. His replacement in the regular group lineup is Shawn Christopher.

The album leads off a track that stylistically recalls a combination of Memphis soul and New Orleans groove. Zachary gets the album off to a smoking start, with its eminently danceable beat, gospel tinged vocals, and rather intriguing lyrics. <<>>

A rather different mood comes out on the following song, Things Change, with one of the album's best sets of lyrics. The rocky riff recalls 60s psychedelia <<>> before the tune does one of the quick changes of direction that are a kind of motif running through this CD. <<>>

Yet another facet of the group is highlighted on Don't Go Giving Your Love Away, based on a sampled drum and bass loop. Despite the faddish technology, the piece slips into an almost-African groove, with new member Shawn Christopher doing the lead vocals. <<>>

The song Phases of the Moon puts a new spin on the old technique of invoking astronomical objects in love songs. Sonia Dada give it a slightly eccentric rocky-funky approach that is reminiscent of a cross between Sly and the Family Stone and Parliament. <<>>

Sonia Dada turns to doo-wop for their stylistic inspiration on the song Get to You, which reminds me of a kind of folky-version of Under the Boardwalk. <<>>

And if that were not eclectic enough, the group turns in a jazzy ballad featuring veteran Chicago jazz trumpet man Lester Bowie. The track is called So Sad and it's a kind of classic torch song with a soulful twist. <<>>

The group's Memphis soul influence is reinforced by the presence of Andrew Love and Wayne Johnson, together known as the Memphis Horns on You Don't Love Me Anymore. The classic R&B sound is juxtaposed with a 1990s drum-machine beat with respectable results. <<>>

The most downright interesting track from a musical standpoint is Green-Eyed Esther. In addition to the articulate lyrics about a strained family relationship, Sonia Dada runs from gospel-style singing to bits of psychedelia reminiscent of the Beatles Strawberry Fields Forever. <<>>

The group has a little fun with its eclecticism on Would I Lie to You. The lyrics are a litany of excuses for not showing up for a date, while the arrangement features a large gospel choir, presumably trying to give the lame story some credibility. <<>>

The album ends with Paradise, with the gospel influence coming to the fore, this time, lyrically. <<>>

Sonia Dada is not an easy group to categorize, though their musical influences can be enumerated readily enough: rock, Memphis and Motown soul, black gospel, doo-wop, 60s psychedelia, hints of jazz, folk and world music. Put it all together and you have the potential for an amorphous stew without much direction. But this group manages to move easily back and forth between the sounds, keeping their components distinct and making music that has a lot of appeal in the process. They really do vary their sound quite a bit, sometimes within a single song, but do it in the kind of organic manner that seems perfectly natural for this group of eight musicians with diverse backgrounds. Guitarist and composer Dan Pritzger creates 15 songs that run the gamut, and feature often fascinating arrangements.

The album's production and sound are first-rate. Even though several engineers and three studios in different cities were involved, the overall result is sonically coherent, and yet varied enough to highlight the diversity of the songs. Dan Pritzger and Barry Beckett's production helps to emphasize the joyful style-hopping the group likes to do, and the arrangements and recorded treatments makes it even more satisfying.

Sonia Dada's new album, My Secret Life, only their third in seven years, it a first-class record that takes eclecticism and makes it fun and appealing for everybody.