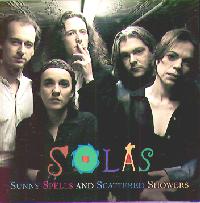 Ever since the great Potato Famine, just 150 years ago, brought waves of Irish immigrants to the US, the two countries have been close. Prominent Irish-Americans, including a couple of Presidents, attest to that. Naturally there have been lots of cultural and artistic ties. In recent years, there has been a great revival of interest in this country for traditional Irish and Celtic music, as opposed to the popular image of the music as being Irish tenors singing sentimental ballads or bunches of guys singing drinking songs.

The durable popularity of the Chieftains, along with more recent phenomena like the "Riverdance" production have awakened interest, and perhaps even been a new experience for some who claim Irish heritage. The jigs, reels, airs and other traditional music have been given new life by a generation of excellent Irish musicians whose recordings are gaining wider distribution in the US. And, there are increasing numbers of American players taking up the cause of Irish traditional music.

This week we have the second album by one of the finest young Irish or Celtic groups on the scene, and it reflects the proximity of the two countries. Solás can properly be called an Irish-American group, with members not only from both countries, but members who have lived in both countries. Their new CD is entitled Sunny Spells and Scattered Showers.

Last year, Solás released their dazzling eponymous debut that became one of the most acclaimed Irish music releases of the year. The 27-year old Philadelphia-born, Irish-bred Seamus Egan already had a considerable reputation when he began forming the band less than two years ago. He was a real prodigy, winning the All-Ireland music competition on no less than four different instruments, which no one had previously done. While still in his teens he recorded a debut solo album called Traditional Music of Ireland, and joined the Irish-American band from New York Chanting House, featuring Susan McKeown. In 1995 he created the score for the film The Brothers McMullen, released a pretty New Age-Irish effort called When Juniper Sleeps and even recorded some hip-hop with Living Colour's Vernon Reid.

Together they bring a combination of youthful enthusiasm, stunning instrumental virtuosity, and eclecticism without losing allegiance to the traditions. Sunny Spells and Scattered Showers continues their winning combination of traditional material with imaginative performances that capture all that is great about Irish music, while avoiding the Uillean bagpipes and scratchy fiddles that may turn some Celtic neophyte listeners off.

With Egan being such a multi-instrumentalist, playing pennywhistle, flute, banjo, mandolin, guitar, and the Irish bodhrán drum, Solás brings a lot of interesting sonic textures to bear, within the context of traditional music. But as they did on their last album, they also sneak a little synthesizer in on one track, which traditional groups from the other side of the Atlantic have been doing unapologetically for the past few years.

Sunny Spells and Scattered Showers follows a similar pattern as Solás' first album -- a majority of the material is traditional instrumental, with a variety of jigs and reels, along with one slow air, and six of the thirteen tracks featuring the superb vocals of Karan Casey, leaving many wishing more of the album were vocal.

The CD begins with The Wind That Shakes the Barley, one of the vocals, a traditional song about one of the various Irish political conflicts, in this case, the 1798 United Irishmen's uprising. The piece is a minor key, and the group's little rhythmic twists give the arrangement an occasional Eastern European flavor. The result is typical of Solás' remarkable musicianship. <<>>

The first of the instrumentals is a set of reels -- reels are the Irish tunes in a two-beat time, as opposed the six-beat rhythms of jigs. The three parts are called The Big Reel of Ballyncally, The High Hill, by a contemporary composer, Ed Reavy, and Flash Away the Pressing Gang. The pieces are nicely arranged with the slower reel in the middle, and the ending selection being especially strong. Egan is featured on the banjo prominently. <<>>

As on their debut album, Solás includes one piece sung in Irish. Aliliú Na Gamhna is a pretty song about a herdsman's daughter going about her job of milking the cows. <<>>

A good example of the group's eclecticism comes on another medley of reels, including Paddy Taylor's, McFadden's Handsome Daughter, The Narrowback, Frank's Reel and Esther's Reel. The first reel is given a subtly funky rhythmic approach <<>> before the group takes off into an irresistible Irish whirlwind. <<>>

This album is a sequel to Solás' debut in several ways, including covering some of the same song topics -- subjects that have made for good musical tales over the years. One such topic given a second approach is that of a sly robber. Last time it was The Newry Highwayman, about a kind of Robin Hood character. This album's scoundrel comes on the song, The Maid on the Shore, about a women who attracted the eye of sailors who pulled in their ship, and took her onboard. She plied her trade of singing to and then robbing the unsuspecting sailors. <<>>

Another of the vocal highlights is The Unquiet Grave. The unusual lyrics are about a young man communing with the ghost of his lover at her grave. <<>>

Of the two sets of jigs on this album, the more lively and engaging is a medley of traditional tunes, Tom Busky's, James O'Byrne's, and The Four Posts of the Bed. Again, the musicianship is breathtaking. <<>>

One of the most beautiful songs is a contemporary composition by singer-songwriter Sidney Carter called Vanished Like the Snow, about how often heroic women get written out of the history books. <<>>

The album ends with another traditional song on a topic covered on Solás' first album. Adieu Lovely Nancy is the story of a love affair riven by the young man's travelling exploits. On the last album, he was a soldier off to fight, while his true love offered to help. This time he is a sailor, and there is a similar offer. This time, though, she stays home and dies of a broken heart before the sailor can return. <<>>

Sunny Spells and Scattered Showers, the new second release by the Philadelphia-based Irish-American quintet Solás -- which by the way means "light" in Irish -- is another outstanding effort by arguably the finest young traditional Irish group on the scene. Their combination of appreciation for the traditions, balanced by a certain degree of stylistic adventurousness, and unquestioned virtuosic musicianship makes this album one that the growing number of Celtic music fans will not want to miss. The arrangement of the album with its mix of material ranging from reels to pretty songs, is also outstanding. But I suspect that there will be many who might wish for more of Ms. Casey's beautiful vocals.

This is very much a sequel to their self-titled debut album, with the same producer, Johnny Cunningham who did another outstanding job capturing the group's musicianship, and even some of the same song topics. I also have a similar sonic complaint about this CD as its predecessor -- too much audio compression in the mastering, robbing a lot of the dynamic range and expressiveness of the acoustic instruments.

With groups like Solás around, no one need worry about traditional Irish music dying out.