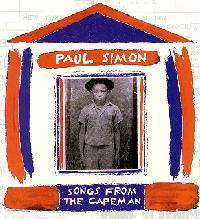 Paul Simon: Songs from the Capeman -- by George Graham

There is a tendency among rock and pop performers, as they progress through their career, to move into more -- as they used to day -- "legit" music forms. Among the rockers who have written for classical orchestra are Paul McCartney, Joe Jackson and Billy Joel, who recently announced his intent to move entirely into the classical realm. This week we have an example of one of pop music's most respected songwriters venturing into a theatrical production, but unlike many others who have attempted to jump genres, he does it without really changing his style -- at least on this recording.

Paul Simon has just released Songs from the Capeman, music from a Broadway production scheduled to debut in January. Giving it even more of a prestigious imprimatur is his collaboration with prize-winning poet Derek Walcott on the lyrics.

After his success in the 1960s with Simon and Garfunkel, a duo which helped to define the folk-rock sound of the era, Simon has been releasing infrequent but much-anticipated records, almost all being innovative in some way, especially in choice of musicians with whom he has collaborated. His 1986 album Graceland introduced American audiences to contemporary African sounds, and he did more or less the same thing with Brazilian styles on The Rhythm of the Saints.

It was around the time of that record, six years ago, that Simon said he got the idea for this production. The music is based on what he calls a "sensational 1959 news story in New York," during Simon's teen years. It was a gang-related killing that has racial and ethnic tensions as a backdrop, in a reminder of who little things seem to have changed. It involves one Salvador Agron who was a member of a Puerto Rican gang called The Vampires, who were on their way to a confrontation with an Irish gang called the Norsemen, when a rumble broke out and two teenaged innocent bystanders were stabbed to death. Witnesses described Agron as a "tall Puerto Rican wearing a cape." Thus he was called the Capeman. He was convicted and sentenced to death at age 16, but his sentence was commuted after pleas for mercy from prominent citizens including Eleanor Roosevelt. He was later released from prison after serving twenty years, apparently as a model prisoner, getting an education and becoming a political activist, before dying of natural causes in 1986 at the age of 43.

Simon was drawn to the story, which suggested a musical setting of 1950s styles and Latin rhythms, which were a part of his own formative years. He began collaborating with Walcott in 1993 to write a musical which became The Capeman.

This CD is interesting in that it is not an original cast recording in the traditional sense. There are some members of the Broadway cast, but Simon performs most of the songs himself, taking on various roles. But there are also other voices who appear doing lead vocals, most notably Marc Anthony, and there is a notable cameo appearance by Ruben Blades. Most of the musicians are Latin jazz players based in New York, such as pianist Oscar Harnandez and drummer Robbie Ameen. The styles on the CD range from doo-wop acapella to rockabilly to salsa to jazzy. The 55-minute CD features thirteen songs from the more than thirty that are to appear in the stage production, hence the title Songs from The Capeman. Interspersed in the CD are snippets of old news interviews with Agron.

Though Simon tried a set of related songs on his largely unsuccessful One Trick Pony, Songs from the Capeman has a very good "book" as they say in the musical theater. The story develops well, and is nicely done on the CD, though Simon includes uncharacteristically coarse language in the lyrics. There's also some racial epithets in what is at its core, a rather gritty story.

The songs explore both the young gang-banger Salvador and an older, more "rehumanized" version of the same character, in some instances speaking to each other. The gangsters' mother, whom Simon met and interviewed in his research for the CD, along with the mothers of the victims are also portrayed in the lyrics, as are other gang members, girlfriends and even a jailer who thought it unfair that Agron should receive in education in prison. The result makes for satisfying listening, -- music that tells a several sides of a story well, and does it in a manner unlike the what one would expect to hear on Broadway.

The CD begins with a piece called Adios Hermanos, sung as an acapella doo-wop song. It incorporates a dialogue between the older Salvador recalling his trial, and the younger version, the gang member. It effectively sets up the storyline. <<>>

That leads into one of the album's best pieces from a musical standpoint. Born in Puerto Rice is classic Paul Simon, the world-musician, tastefully incorporating Latin influences, while providing a kind of early musical biography of Salvador Agron. <<>>

Bernadette is another love song, sung by Simon, in a style recalling Fifties rock and with a hint of jazziness. <<>>

Salvador's initiation into his gang is the basis for the track called The Vampires, done as a tasty slow salsa. <<>>

One of the most lyrically powerful compositions on the CD is Can I Forgive Him. Interestingly, it's a solo acoustic demo Simon recorded in his home. The lyrics are a dialogue among Agron's mother and his those of his victims. <<>>

Once Agron is imprisoned, he pursues an education there, and that causes some ambivalence among the inmates and one of the guards. A short piece called Killer Wants to Go to College, tells the story in a Fifties rock setting. <<>>

A prison guard named Virgil in the song of the same name is resentful of Agron's studies in prison, especially when Virgil cannot afford to send his own kids to college. <<>>

Time Is an Ocean is a dialogue between the younger Salvador and his older counterpart, with Marc Anthony and Ruben Blades singing the respective parts, in another nice Salsa arrangement. <<>>

The album ends with Trailways Bus, with the main character having been released and on his way to freedom in Texas, but finding discrimination from the border patrol. <<>>

Paul Simon's new CD Songs from The Capeman is an outstanding effort from one of our best songwriters. His first full-blown venture into musical theater, the CD is an interesting cross between a new solo album by Simon and a cast recording of the Broadway production. As usual, the musicianship is first-rate, and Simon's own performance is very understated, sometimes almost dispassionately telling the story of crime, violence and ethnic divisions, unbroadcastable language and all. Simon and his literary collaborator Derek Walcott have created a nice new twist on an old plot line that goes back to West Side Story, in this case based on real people and events. Drawing on the sounds of the late 1950s, including doo-wop and the Latin American sounds that were part of the Puerto Rican characters background, and with lyrics that skillfully tell the story without the need for a lot of explanation, the CD is one of Simon's most artistically successful works yet, and destined to be another classic in his career -- though there's nothing like a pop hit song to be found on the record.

In our weekly sound-quality grade, we'll give the CD an "A." The mix is excellent and captures everything well, but dynamic range is restricted a bit by the usual compression in mastering that is typical of major-label CD releases.

Forty years after the release of his first hit record, Hey Schoolgirl with Art Garfunkel as "Tom & Jerry," Paul Simon has created a fascinating new work in Songs from the Capeman, turning his attention to writing for Broadway, but in the process creating a worthy new recording that reflects his own distinctive style.

(c) Copyright 1997 George D. Graham All rights reseved.
This review may not be copied to another Web site without written permission.