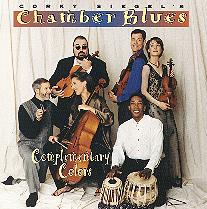 For over 30 years, attempts have been made to combine classical and rock. Some have been more successful than others. Generally, rock versions of classical pieces have been more artistically significant than orchestral versions of rock tunes. But some of the most interesting music results when creative compositions are written specifically for the mix of orchestral and rock instrumentation. The most prolific period for such efforts was during the height of the art rock days, in the mid 1970s. Since then, classical and rock fusion efforts have been few and far between, mainly because musical sophistication seems to antithetical to the commercial pop of the late 1990s.

But this time we have thoroughly enjoyable classical fusion effort, in this case, with the blues. It's the new second album by Corky Siegel's Chamber Blues entitled Complimentary Colors, which consists of a string quartet, blues harmonica and percussion influenced by India and elsewhere.

Those with long memories and dedicated blues fans, will recall the name of Corky Siegel as being one of the founders of the Siegel-Schwall Band in the mid 1960s, one of the first young American rock-based bands to plunge wholeheartedly into the blues, during a period when the British blues-rock bands were re-exporting the blues back to young American audience. Corky Siegel played harmonica and keyboards and did most of the lead vocals, while Jim Schwall was the guitarist. The group was based in Chicago, so they had a lot of opportunities to become steeped in the work of the leading authentic electric blues practitioners of the day.

Around 1968, classical composer William Russo saw the band play and was inspired to write a symphonic work entitled Three Pieces for Blues Band and Orchestra, which became a best-selling album in the classical world, with the San Francisco Symphony conducted by Seiji Ozawa. Siegel also appeared on another work by Russo for orchestra and blues harmonica. In the meantime, Siegel himself began to write music for the combination of blues harmonica and orchestral instrumentation, including works for dance.

In 1995, Siegel released an album called Corky Siegel's Chamber Blues with himself and the West End String Quartet from Chicago and percussionist Frank Donaldson. The album immediately caught the ear of those who got to hear it, which unfortunately was not very many. The whimsical blend of a string quartet and blues harmonica with vaguely Indian percussion was fascinating and once one got beyond the sheer novelty of the sound, was quite engaging and satisfying.

Now Siegel and company are out with a second Chamber Blues CD, and it's also a delight, exceeding the first album in both musical quality and variety. Siegel realized that once the novelty of the sound was overcome, a successor album needed a bit more depth, and that has been provided here, with pieces that are both interesting and fun, and feature the various members of the group in solo opportunities, as well as some vocals for the first time.

In addition to the string quartet, percussionist Frank Donaldson beings an interesting facet to the group. He played drums with the 1960s soul band Archie Bell and the Drells, and later played jazz drums with Ramsey Lewis. He also took up classical percussion studies and became an orchestral percussionist, so he is another player approaching the project from "both sides of the fence," so to speak.

It's interesting that some of the pieces on the album were commissioned works supported by foundation grants, which seems to be the about the only way music like this gets written. Like the combination of blues and orchestral music that this is, the material is a combination of written out parts and improvisational opportunities. And unlike most orchestral works, the gathered players really sound as if they are having a good time, undoubtedly encouraged by the composer.

In classical tradition, Siegel assigns his pieces opus numbers, as well as titles, and the opus numbers are not necessarily consecutive on the record. The first is Opus 18, entitled El Niño, and it epitomizes the Chamber Blues sound. Siegel describes it in his liner notes as "The Delta converges into the Danube." There are hints of Mozart along with classic blues harmonica lines. While not the best piece of composing on the record, the track conveys the group's combination of great musicianship and good fun. <<>>

One of the pieces commissioned and supported by a foundation was named Aunt Lila's Suite, after the Lila Wallace-Reader's Digest Fund. Three of the four sections highlights a member of the quartet. The first, the album's title track, Complimentary Colors spotlights violinist Guillaume Combet in a give-and-take with Siegel's harmonica. <<>>

The second section, called Burnt Sienna is described by Siegel as a visit to Chamber Zydeco, with some Louisiana influence, complete with washboard percussion. <<>>

Also a part of Aunt Lila's Suite is Slow Indigo, which highlights cellist Jill Kaeding. The track shows what a great instrument for the blues the cello can be. Siegel switches to piano. <<>>

It's Too early in the Morning, Irene is a vocal, and one of my favorites on the album. It's a reworking of an old Siegel-Schwall Band song, typical of the wit of that band back then, and the whimsy of this group today. <<>>

For me the most interesting of the instrumental pieces is Pizzicato Blue, which was written by and features violist Richard Halajian. He plays his instrument pizzicato, while the rest of the quartet bows. His plucked viola sounds like a cross between a ukulele and some kind of traditional African instrument. <<>>

Siegel's harmonica is the featured solo instrument on Downtown Blues, a slower piece which nicely combines a kind of classical largo movement with the tastefully bluesy harmonica. <<>>

The album ends with another old Siegel-Schwall Band song, Goodbye California, about the eventual sinking of the state's land into the sea after the big earthquake. <<>> At one point, the group gives it an oddly Latin touch. <<>>

Complimentary Colors, the new second release by Corky Siegel's Chamber Blues is an album that's both interesting and fun. The combination of the blues harmonica and the string quartet is instantly intriguing to those who have not heard it before, and the group's distinctly whimsical spirit and the direction of the album make it quite entertaining, as well as durable -- music that will stand up to a lot of listenings. If one were set out to quibble, one could say that the writing tends to be bit weak from a compositional standpoint. The structure of some of the pieces seems a bit scattered -- with melodic themes and changes of color being introduced almost at random, and the music going along and just ending sometimes unexpectedly without much of a restatement of the themes, as one expect in classical music or even jazz. But this really isn't either. As Siegel write in his notes, explaining why the portions of Aunt Lila's Suite are non-consecutively numbered, "When it comes to Chamber Blues, order is not a priority."

Sonically, this album is a bit unusual in sound, but absolutely a class act. Unlike a classical recording with distant miking and lots of reverb, Complimentary Colors, produced and recorded by Ken Goerres, was made with rather tight miking and no reverb on the quartet. This might seem like sonic heresy, but the sound, recorded on analogue equipment, is wonderfully warm and intimate. The group seems right in your living room, rather than in a concert hall, and that contributes to the album's relaxed, informal sound. The dynamic range, while not quite up the classical recording standards, does capture much of the range of expression without much compression.

Artistically successful mixtures of classical and popular music have been few and far between in recent years. Corky Siegel's Chamber Blues is an outstanding example that's also a lot of fun.