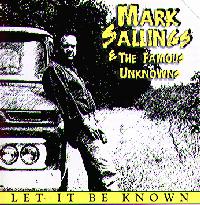 Mark Sallings and the Famous Unknowns: LET IT BE KNOWN
by George Graham

One of the great American music forms, the blues, is definitely on the upswing. Even Billboard magazine introduced a blues chart last year. And one of the interesting developments to come out of the current revival of the blues is the discovery of a remarkable number of fine veteran blues performers who have been plying their trade in various parts of the country for many years, generally playing to regional audiences in bars and clubs, and escaping national recognition -- that is, until now. In the last few years, many worthy regional blues artists have been signed by the increasing number of record labels dedicated to the music, and thus have received some well-deserved national exposure. This album review series has featured several such people, including in recent months Tad Robinson, Lloyd Jones, Mark Hummel and Big Joe Maher. To this list we now add Mark Sallings, whose new release is entitled Let It Be Known.

A harmonica specialist who also plays sax and keyboards, Sallings grew up in the Mississippi delta and started playing music in local clubs at age 13. By age 15 he formed his first group called The Beale Street Blues Band. By 1989, Sallings was leading his current quartet he calls the Famous Unknowns, which became the house band when B.B. King opened his blues club on Beale Street in Memphis. For two and a half years, The Famous Unknowns held forth at B.B. King's accompanying all manner of blues greats who passed through. Sallings and his group, whose other founding member is drummer Victor Lukenbaugh, also have toured quite a bit, sharing the stage with everyone from Albert King and Muddy Waters to Charlie Daniels and Steve Winwood.

Now Mark Sallings and the Famous Unknowns are out with what I believe to be their debut release, the appropriately entitled Let It Be Known.

Sallings is a fine harmonica player whose main influences are the Chicago harp men like Little Walter and Charlie Musselwhite. Sallings sings in a tenor voice sometimes reminiscent of John Mayall, while the music he plays ranges from all-out Chicago-style boogies and shuffles to more laid back jazzy slow blues along with a couple of tracks with a more funky beat. Most of the music is original material, but the album also includes a couple of old standards. In keeping with the musical values of the blues, the music is simple and direct in form, but achieves its greatness through quality of the performance. Sallings and company can sometimes be a bit understated, but their playing is marked by a high level of class.

In addition to Sallings and the remarkably steady drummer Lukenbaugh, the Famous Unknowns include guitarist Tony Spinner, a subtle, almost laconic player whose philosophy in soloing seems to be "less is more." He plays with an especially pleasing clean electric guitar tone. The bassist is another solid, tasteful player, Jerry Bone. They are occasionally joined by organist Ray Reach.

Let It Be Known has all the required ingredients of a good blues album in terms of the mix of tempos and lyrical moods. There are also three outstanding instrumentals, two of which are at the beginning of the album.

The opener is a strong Chicago-style shuffle-boogie with the clever punny title Marks Harpo. The band cooks, and it seems like a perfect tune for the Famous Unknowns to lead off a live show with. <<>>

Organist Ray Reach appears on the following track, Blues Acres, another instrumental, this one done in the classic slow blues style. While Sallings plays some fine harp, the track turns out to be a particularly good vehicle for guitarist Tony Spinner to highlight his combination of a great tone and an approach that makes every note count. <<>>

Sallings' vocals make their debut on one of the artist's best original songs, Punishing Kind of Love. It's an infectious minor-key boogie with interesting lyrics. <<>>

One of three covers on Let It Be Known is Howlin Wolf's Killing Floor. The group does a driving version of the tune that also gives Sallings and Spinner opportunities for strong solos. <<>>

The blues is not always a repository for the most clever or subtle of song lyrics, but Sallings' original material is marked by adroit turns of phrase. Another good example is Woman Pleasing Man, which follows the blues tradition of double entendres. It's also a first-class performance with the group getting into a great, slightly funky groove. <<>>

Another fine piece of lyric-writing is Mighty Oaks, which is a tribute to legendary blues performers of the past, with references that will test a blues fan's knowledge of trivia. <<>> Sallings ends with a verse optimistic about today's blues artists. These lines refer to Chris Cain and the Fabulous Thunderbirds, respectively. <<>>

Though Sallings and the Famous Unknowns seem at their best on rhythmically infectious boogies, one of the album's highlights is a long, slow blues in classic form. The instrumental TW Bb Blues provides a chance for Sallings, especially, to do his stuff on his harmonica. <<>>

The album ends with Playhouse, the record's funkiest track, on which Sallings plays his sax while trumpet player Lester Harris makes a guest appearance. <<>>

Let It Be Known the new album by Memphis-bred bluesman Mark Sallings and the Famous Unknowns is another excellent example of a fine veteran regional bluesman getting some national exposure. He's a first-rate harmonica player, an appealing vocalist and a songwriter who pens lyrics that are a cut above most blues material. His band is an excellent one with the rhythmic tightness that sets the best blues bands apart. Drummer Victor Lukenbaugh is a solid tasteful presence, while guitarist Tony Spinner's generally laid-back style is an ideal instrumental foil to Sallings' hot harmonica. The result is yet another reason to be optimistic about one of America's great music forms.

In terms of sound quality, this recording, made in Birmingham, Alabama, by producer Ross Roberts and engineer John Kliner, is top-notch. The mix is admirably clean, with the guitar sounds being especially worthy of kudos. Also the recording is refreshingly free from the excessive compression that afflicts so many rock CDs these days.

Let It Be Known is a good title for this album by Mark Sallings and company. Chances are veteran blues fans, and even those relatively new to the style will be very glad they got to know The Famous Unknowns.