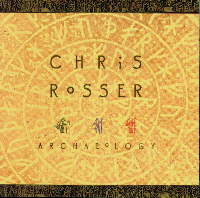 With all the excellent singer-songwriters with records out there, just when a folk fan thinks that there surely couldn't possibly be another one impressive enough to blow one's all-natural-fiber socks off, a debut release appears that raises the standard even higher, and perks up even the most jaded follower of the now long-lived style. This is precisely what we have this week in the debut release by Chris Rosser, an album entitled Archaeology.

Twenty-seven-year-old Chris Rosser started on piano, taking lessons from his mother from age seven, playing in the usual rock bands in high school, along with doing some jazz and taking an interest in a fairly wide range of styles from country to Middle Eastern. He pursued a musical education, graduating from the University of Miami School of Music in 1992 where he majored in jazz piano and studio recording. But during his senior year, he began taking an interest in acoustic guitar and the singer-songwriter approach of contemporary artists like Shawn Colvin and David Wilcox. After college, Rosser moved to Charlotte, North Carolina where he worked in a recording studio for two years, then he and his wife Lynne moved to Asheville, also in the Tar Heel State, to devote themselves to performing full-time. He began to attract attention at such folk venues as the Kerrville, Texas, Folk Festival, where he won a songwriting award last year, and at the Telluride Bluegrass Festival.

Now Rosser is out with his debut recording, which given his background in recording studio work, he also produced, engineered and mixed himself. Even amidst the abundance of fine up-and-and-coming singer-songwriter records, Rosser's Archaeology stands out. Rosser shows his influence by fellow North Carolinian David Wilcox, who appears on the CD with Rosser. Rosser's literate songs, and soft, warm, appealing baritone vocals share a musical kinship with Wilcox. Rosser is also a fine wordsmith, with a special knack for weaving into songs interesting lyrical analogies such as the title song's view of life's old memories as an archaeological dig. Musically, his compositions show the sophistication that a jazz background brings to harmony and melody. Though he is joined by several guest players, this is largely a one-man effort. It is a bit unusual for a folkie to be so studio-oriented. Rosser plays guitar, keyboards, bass, mandolin and more unusual instruments like a harmonium, which is a reed-organ, and a cittern, a mandolin-like string-instrument. He is joined by his wife Lynne on harmony vocals, plus quite a few presumably North Carolina-based players who do an instrument here and there, from Middle Eastern percussion to cello. David Wilcox is featured on several pieces

The album begins with a song that is typical of Rosser's writing, though it's the biggest production on the CD with a full set of drums. Follow the Water Down illustrates Rosser's bent for fashioning interesting metaphors, in this case, it's love as a wild trip down a river. The tasteful arrangement is reminiscent of the newer generation of folkies like John Gorka or Shawn Colvin. <<>>

The title track Archaeology is another fine example of Rosser's adroit wordcraft. The upbeat, melodic song considers the parts of one's life and memories that remain durable, despite seeming to be buried. <<>>

One of the album's most unexpectedly delightful tracks is called The Laundromat Song (Imagine That). A simple scene of a girl sitting in a laundromat waiting for her clothes conjures up all kinds of romantic images. <<>>

Two tracks feature a little World Music influence. Dancing Dervish is another of those metaphorical sets of lyrics, and in keeping with the title, there is some Middle Eastern instrumentation and stylistic direction. <<>>

The folkie and World Musician also combine in a piece called In Everything (Momosona). This delightfully positive track has echoes of African sounds in both the melodic figure and the percussion. <<>>

David Wilcox appears prominently on Faraway Train, yet another nice set of lyrics woven around a metaphor, in this case, life as a train. Wilcox plays electric guitar and does the backing vocals. <<>>

One of my favorite tracks is Carousel. Here, the merry-go-round stands for the way life unfolds and often moves in cycles. The song's concept is reminiscent of Joni Mitchell's The Circle Game, but the approach is entirely different, including writing the song as a waltz, which gives it extra appeal. <<>>

Rosser comes close to doing a protest song in a piece called Dawn in Dixie County, telling the story of an apparent racially-motivated killing by deputies who in the end were acquitted of the crime by a friendly small-town jury. <<>>

The album ends with a mellow solo performance of a piece called The Living in Me, another very attractive song whose lyrics form a kind of prayer. <<>>

North Carolina singer-songwriter Chris Rosser has made a memorable debut with his new CD Archaeology. Even in the current surfeit of good articulate folkies, Rosser stands out. He writes great songs, both musically and lyrically, often bringing a fresh lyrical approach to the construction of his songs about love and life though clever metaphors. His warm engaging vocal style is reminiscent of John Gorka and that of Rosser's friend and mentor David Wilcox. Making the CD more impressive is the fact that this was a largely do-it-yourself effort by Rosser, with the artist handling almost all the studio duties as well as playing multiple instruments, with world class results.

Sonically, the album is nicely done, except for an occasional off-mic sound on the vocals on pieces in which Rosser was performing guitar and vocal live, and one got into the other's microphones. But generally, the mix is clean, and bright, and happily has good dynamic range.

The singer-songwriter format may be simple in concept and venerable in age, but performers like Chris Rosser are keeping the style vital, breathing new life into it, and making some very good, intelligent music in the process.