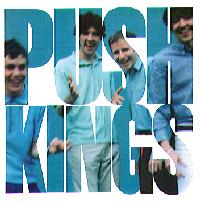 It's only natural that young, up-and-coming bands would want to play music in styles that are currently popular. That is, after all, how pop music evolves, with each generation being entitled to its own particular set of styles, and musicians of that age group naturally gravitating to those genres. But perhaps because of the aging of the Baby Boomers and with the media moguls still trying to reach them, "retro" has became a great theme everywhere you look, with a particular emphasis on the 1960s. So it may not be surprising then, that a considerable number of young musicians are also taking up styles that preceded them by a generation or two, with everything to the old-time swing-era music of the Squirrel Nut Zippers to the neo-psychdelic music of Rusted Root. And with the Beatles anthology CDs currently renewing interest in the Lads from Liverpool, one would not be off the mark to expect another round of younger groups to turn to the Beatles for influence. This won't be the first time, of course. It seems that every few years there is another first-rate band that comes along and shamelessly flaunts their Beatles imprint. In the 1990s there have been such groups as The Grays and Jellyfish, and before that, The Bangles, The Producers and Klaatu, to name just a few.

This week we have yet another excellent young band whose influence by the Beatles is hard to miss. In fact, their two sibling lead vocalists sound uncannily like Paul McCartney. The group is called the Push Kings, and so is their CD.

The Push Kings are from Cambridge, Massachusetts, and are headed by two singers, guitarists and keyboard players, Carrick Moore Gerety, and his brother Finn Moore Gerety. Their record company biography said they grew up listening to the same records, and claimed that their mother had to buy them duplicate copies so they wouldn't fight over them. The story goes that the group got its start one day at a party when Carrick got into an argument with one Matt Fishback, who turned out to be a bassist, while in another room, Finn, who had a reputation as being a Ping-pong champ was bested by a fellow named David Benjamin. Finn asked if, with his powerful swing, he was a drummer. Benjamin was, and the four left the party on the way to being a band.

Apparently when the Push Kings first started out they sounded like the grunge band Pavement, but soon turned their attention to catchy melodies and crisp vocal harmonies by the time they released their first single.

Now they are out with their debut full-length CD, entitled Push Kings, and it shows them to be one of the best Beatles-influenced bands to appear in the past year. As mentioned, both Carrick and Finn Moore Gerety can sound like Paul McCartney, with Carrick being especially eerie in his resemblance with many of the same vocal inflections. The Push Kings' sound is rather like the middle period Beatles, though their vocals are more like McCartney in the latter days of the group. The Push Kings, and their producer Eric Masunaga, also bring in a few of the same arrangement elements, such as a few horns and a string quartet.

But unlike some other Beatles-accolyte bands, the Push Kings' create material that is quite original. One cannot readily claim that this song was influenced by, say Got To Get You Into My Life, or that one was based on Day Tripper. Further, the Push Kings' lyrics are rather unlike the Fab Four's quirky wordcraft. Also, drummer David Benjamin's playing does not at all resemble Ringo Starr's distinctive style. So, it's rather like the best of both worlds -- music that any Beatles fan could relate to, without its being any kind of a rip-off. And being children of the 80s and 90s, Push Kings are not without the influence of the alternative rock scene, mainly in the level of energy, while one can also hear that they have listened to their share of Elvis Costello as well.

The album gets off to a strong start with a song called Nine Straight Lines, which Carrick Moore Gerety said came to him a dream. On the song's chorus section, he shows his considerable McCartney resemblance. <<>>

The Moore Gerety brothers alternate lead vocals on the album, with Carrick on the odd-numbered tracks, and Finn on the even tracks of the fourteen-song album. Finn's first piece is called Pop Phenomenon, which shows a bit more of the group's post-punk influence. It's another good example of writing that combines the group's slightly offbeat lyrics with a tune that, as it unfolds, turns out to be more than simple pop. <<>>

Also featuring Finn is Stay with Her, a clever love song which shows off the horn section in its rather complicated multi-faceted arrangement. <<>>

A song called Mrs. McKean was written about the painter Margarett Sargent McKean, who was the Moore Gerety Brothers' great grandmother. It's another piece combining slightly unconventional lyrics with an appealing pop setting. <<>>

One of the more unusual sets of words comes on Jenny G, about falling in love with one's baby-sitter. The Push Kings use this tune to show off some other musical influences with the help of the horn section. <<>>

The group laments the lack of their kind of melodic pop on the commercial media in a song by Finn called Number Ones. It's one of the album's highlights, in which they throw in the strings and horns, behind Finn's great vocal. <<>>

No album of pop songs would be complete without one about breaking up. The Push Kings' entry is called Let's Face It, and they apply all their bright pop ammunition into this deftly executed track. <<>>

If the Push Kings suffer from one shortcoming it's their weak lead guitar work. Most songs lack much of a guitar solo, but on a song called Florida, otherwise another piece of skillful pop, the guitar solo is a bit of an embarrassment. <<>>

If one could imagine the Beatles doing reggae, it would likely sound like the Push Kings' Love in My Heart. The result is another interesting and appealing track. Carrick Moore Gerety puts on his best McCartney voice. <<>>

The album ends with a piece in which they largely eschew the Beatles sound. Be Kind, Be Still, Be Near, still has some of the same affinity for the classic pop sound, but the Push Kings cast their net wider for influences for another of their intelligent pieces of composition. <<>>

While most rock bands in their twenties look to more current styles for their musical inspiration, the Push Kings are one of a growing number of groups who look much further back. On their debut album also called Push Kings, this Massachusetts quartet unabashedly shows off their Beatles influence, from the Moore Gerety Brothers' considerable vocal resemblance to Paul McCartney to their composing style emphasizing bright and melodic but musically interesting tunes with arrangements that make judicious use of small numbers of added horn and string players. Their songs are all very much original: there isn't a stolen guitar riff to be heard, and their lyrics are quite unlike those of the Fab Four. The result is an album that is both fun and clever, that may be as likely to appeal to the parents of the group members that to those of their own age.

Sonically, the album is a typical period pop production, with lots of compression and a mix optimized for small speakers. But the sound is generally clean and updated with more modern technology than Sixties-era material. Producer and engineer Eric Masunaga achieved a decent balance of the retro and the current, with the emphasis on the former.

The Push Kings' publicity asks the question, "Is there really an anti-now movement out there?" That probably sums up what this skillful young group has done in looking a bit more than thirty years back for inspiration.