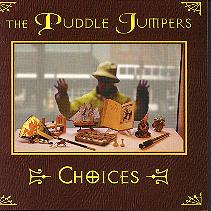 With there being no clear single direction to pop music in the 1990s, all manner of earlier styles are being resurrected by younger groups, doing music from 1930s swing to 1980s electronic pop. The goal of many of these younger "retro" bands is to re-create the original style with a degree of authenticity, though those of us with long memories often observe that some of the retro bands don't quite get it right. Others, with perhaps a bit more imagination, take elements of past styles are try to do something new, mixing ingredients and adding some more contemporary influences or original ideas.

This week we have a band in the latter category, the Puddle Jumpers, whose new second release is entitled Choices. The Puddle Jumper's forte is something they have called "progressive folk," combining two influences from the past -- the progressive or art rock style of the 1960s and Seventies, in the tradition of Yes or Gentle Giant, with elements of traditional folk music, including some Celtic influence and occasionally some of the socially conscious and articulate lyrics of the 1960s protest singers. The result is has the complex, sophisticated near-symphonic arrangements of the art rock bands, with an acoustic undercurrent usually expressed in the sound of group founder Rick Vartian's octave mandolin.

That instrument was the beginning of the band. The California-born 39-year old Vartian moved north to Seattle to work for a professional audio equipment manufacturer. He had previously played keyboards in various groups and done studio work, but the sound of the octave mandolin, which is pitched lower than its familiar bluegrass cousin, provided the inspiration for Vartian to combine two styles he had always enjoyed: progressive rock plus the folk-influenced music of groups like Fairport Convention and Steeleye Span. Vartian eventually connected with drummer George Short, also with a background in progressive rock, and they eventually recruited the Canadian-born guitarist David McGrath and Chicago-born guitarist George Michael. Vartian at first played the bass parts with his keyboards, but after their first album was recorded, they added bassist Tom Austin, who makes his recorded debut on this new CD.

The Puddle Jumpers' debut CD, Out of the Shadows, released in late 1996 was a rather remarkable record in its blend of the two seemingly disparate musical elements, along with a surprisingly strong melodic sense that made their music very attractive even to those not particularly drawn to the symphonic side of rock. Out of the Shadows was also very much a do-it-yourself effort for the band, from recording and mixing to a distinctive CD package to direct sales from a Website.

Now on their sophomore effort, whose release they decided to postpone as they awaited a new generation mixing console made by Vartian's former employer, the group builds on their distinctive style and starts to go in some different directions. While Out of the Shadows was an immediately notable album just for its creative stylistic blend, now that the group has established their genre, Choices seeks to build on it. The result is a worthwhile album that is somewhat more diverse, with some of the directions taken being a bit more successful than others.

Part of the reason for that diversity is that the composing is spread more among the various members of the group.While Rick Vartian remains the most prolific composer in the band, David McGrath also contributes several songs, and George Michael wrote a piece and contributed to another, as he did on the last album.

As before the Puddle Jumpers feature first-class musicianship, with the sophisticated arrangements define art rock, but with the band's characteristic succinctness, with all but one track on Choices timing in at under five minutes. This time around Vartian uses his mandolin less in favor of his keyboards, usually with a pre-synthesizer organ sound, and there is more of a straight rock influence on several tracks, which for me reduces the interest some. Lyrically, the album is also more diverse. On Choices, the group addresses issues ranging from a plea for tolerance to a couple of love songs, not the sort of thing usually heard in classic art rock. But more typical of the genre are a pair of tracks about myths and legends.

The album commences with the Vartian-penned title piece Choices, whose lyric theme also is embraced in some of the other songs. The track epitomizes the Puddle Jumpers' sound, with Vartian's octave mandolin featured prominently, and the soaring melody line and vaguely martial beat lending an art rock sensibility. <<>>

Continuing on a similar lyrical theme is David McGrath's song Not So Easy. The track reflects the more mainstream rock side of the record <<>> though the group does launch into a progressive rock interlude. <<>>

A couple of the tracks on Choices got me thinking about a common thread running though both British Isles folk and art rock: a tendency toward lyrics about such things as castles and the supernatural. Both are represented on this album. The title to Vartian's song The Boy and the Gnomes pretty much sums up the direction of the piece, while the style is more electric than the norm on the band's debut album, mandolin notwithstanding. <<>>

The castles are represented in McGrath's song Storybook, one of the highlights of the album. The tale concerns a princess and her clandestine lover, with whom their relationship is jeopardized when she is forced into an arranged marriage. It could be a classic old English folk tale and the Puddle Jumpers bring some of that influence into their arrangement. <<>>

If there is a classic Puddle Jumpers sound, it would is epitomized on the Rick Vartian's song Pay the Piper. His mandolin takes a prominent role in combination with the art rock influence and the group's strong vocal harmonies. <<>>

The album does have its lapses. No Sleep for Me Tonight is a love song in which the mainstream pop influence gets the better of the band, and the dual guitars can sound dangerously close to those of Tom Scholz's Boston band. <<>>

More successful as a love song is The Magic One. Here the band also runs toward the melodic pop side of things, but keeps it tasteful and interesting. <<>>

For me a highlight of the album is George Michael's piece Disarm Yourself, a plea for tolerance and peace, with an attractive art rock setting. It summarizes everything that the Puddle Jumpers do so well.

The album ends with its longest piece, only slightly exceeding five minutes. Pawn of the White Queen is classic progressive rock, both musically and lyrically. Unfortunately, it also lacks some of what makes this band unique. <<>>

Choices the new second album by the self-described "progressive folk" band The Puddle Jumpers, continues the group's distinctive blend of folk influence with 70s art rock. The sophisticated arrangements, combined with the acoustic undercurrent of Rick Vartian's trademark octave mandolin, plus the group's strong vocal harmonies and good melodic sense, makes for worthwhile listening especially for those who have been art rock fans. However, the band seems to make a conscious effort to transcend their original sound. Sometimes they succeed famously, but occasionally, they can brush up against some of the cliches of 70s rock, like too many electric guitars or too stiff a rock rhythm. But for the most part, it's tasteful and creative, marked intelligent writing and excellent musicianship and vocals.

Sonically, the album is quite satisfying, with the group's own production, and the recording done for the most part in the band's own studio, showing more polish than many big budget major label releases. The vocals are especially well recorded, though again sometimes the big electric guitar sounds can get a bit on the heavy side.

The Puddle Jumpers came up with a creative new sound on their 1996 debut release. Now two years later, they have followed it with a worthwhile album that although it might not have the impact of their debut, nevertheless makes for first-rate listening, and shows that art rock is alive and living in Seattle.