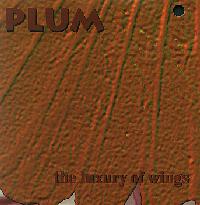 Plum: The Luxury of Wings -- by George Graham

Rock music can range from the simple to the very complex. Rock 'n' roll started out simple, but over the years more sophisticated varieties have evolved, while periodically there have been movements to take it back to its simple straightforward roots, such as in the days of the punk rockers of the 1970s, and much of today's alternative rock with its three chords and grungy guitars. At the other end of the spectrum, rock has sometimes reached near symphonic levels with the progressive rockers of the 1970s and the sophisticated jazz-rock fusion styles.

With the simpler varieties of rock, it's usually the lyrical content and passion that make the quality, while level of musicianship is the guiding factor in the more elaborate forms. This week we have an interesting hybrid: a straightforward roots-rock-oriented, three piece band that brings into the equation some interesting and subtle musicianship and writing, coming from an academic background. The band is called Plum, and their new CD is entitled The Luxury of Wings.

Plum consists of three graduates of the Berklee College of Music in Boston, known for its rigorous jazz-oriented curriculum. Guitarist Jon Bookout, bassist Steve McAllister and drummer Tripp Wiggins met at Berklee and decided to form a band in 1991. They performed around the Boston area. But upon graduation, they decided to head from Boston to Austin, to be part of the Texas capital's active music scene. By now, they have established a following in Dallas, Houston, San Antonio and Austin. The Luxury of Wings is their second album.

What makes Plum so appealing is their ability to take the fairly simple format of the three-piece band and raise it to a high level through excellent musicianship, including fine vocals and harmonies, and original material with a deceptive simplicity. Their writing combines often adroit lyrics with very interesting compositions incorporating the kind of harmonic and rhythmic sophistication that would keep a jazz musician happy. They come off as a sort of cross between the best aspects of the Jayhawks and XTC, with their roots-oriented sound with folky acoustic guitars and straightforward lyrics, but with the combination of great pop sensibility and left-field musical cleverness that marks XTC's work. One can also hear some of the mid-period Beatles in Plum's harmonies and gift for memorable guitar riffs.

Bookout and McAllister do all the writing, mostly separately, but they share a similar approach. Though Plum is a three-piece band, on their album they are not afraid to overdub multiple guitar parts, usually adding some acoustic guitars to the electric lines to give a folky texture to many of the songs. This is almost entirely a self-contained effort. Only one track has any added musicians -- a violin and tabla are brought in for the occasion.

The album gets under way with one of Jon Bookout's songs, Lonely Word. It's one of the band's more straightforwardly melodic pop tunes, with an energetic edge. <<>>

With a similar direction is a Steve McAllister's composition called Nothing, essentially an unrequited love song. Despite the band's energy level, the tune is a waltz. <<>>

One of the more laid-back tracks has an appropriate title, Calm Morning. The McAllister composition features some of the band's most appealing vocal harmonies. <<>>

The normally timeless music of Plum does fall prey to just a bit of trendiness on their CD with the use of one of those faddish drum loops on the introduction to Steve McAllister's composition Low. <<>> But the group soon dispenses with that and goes in more interesting directions, in this song based on the same lyric concept as the Beatles' I'm Down. <<>>

Perhaps the cleverest lyrics on the album come on Get Girls Wrong, a great pop song about miscommunication between the sexes. <<>>

Some of Plum's XTC influence comes out on one of my favorite pieces, Killing Time, by Jon Bookout. It's the track with the added violinist and tabla player in the beginning <<>> after which it takes on some of the English band's tendencies for interesting seemingly revolving overlapping parts. <<>>

The last officially-listed song, Bone People, is a kind of skewed view of the boogieman concept in a creative rock context. <<>>

But after that there is a hidden track on the CD, probably entitled Man in the Moon, a very appealing tune in waltz time done with acoustic guitars and minus the drums. <<>>

The Luxury of Wings is the excellent new second album by the Austin, Texas, based trio called Plum, snot to be confused with another band spelled Plumb, or yet another separate band called The Plums. Jon Bookout, Steve McAllister and Tripp Wiggins bring the musical sophistication that comes from their academic background at Berklee College of Music to bear on a seemingly simple three-piece rock band format. They combine first-rate songwriting with very fine musicianship and especially strong vocal harmonies to come up with a recording that illustrates how durable the classic rock format can be when imbued with creativity, taste and skill.

Sonically, the album is also first-rate. The producer and mix engineer was Dave McNair, who has also worked with Belinda Carlisle. He did an outstanding job in keeping the sound clean and bright, with the acoustic guitars adding a sparkle to most tracks, and the vocal harmonies mixed just right. The Luxury of Wings, which was recorded in early 1996, is refreshingly free from trendy studio effects, and there is a decent dynamic range. The sound is as pleasingly unpretentious as the band.

What Plum does has certainly been done before, but what sets this album apart is not any innovative sound, but sheer good taste, good songs, and quality musicianship. And isn't that what makes music enjoyable? This is one of those CDs whose music is as likely to sound just as good five or ten years from now as it does today.