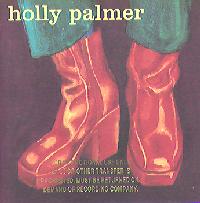 If you have listened to this series at any length, you know that singer-songwriters are currently in great abundance. In fact worthwhile new releases by outstanding singer-songwriters are ubiquitous especially on the independent recording scene. With such numbers present, not it's not surprising that a lot of interesting stylistic approaches are being represented. Most are in the classic folkie vein -- the musician with acoustic guitar playing and singing his or her own songs, with the lyrics and vocal quality being central to artist's trademark. But there are those whose musical arrangement approach is as interesting as what they have to say. Jane Siberry and Jeff Buckley are good recent examples.

This week we have another, the debut record by an artist whose release is a good integration of interesting words, eclectic musical ideas, and even distinctive recording production technique. Both she and her album are named Holly Palmer.

Holly Palmer is a native of Santa Monica, California who moved to Seattle at an early age. The product of family where music was pervasive, her formal start in performing was playing flute in grade school. She then moved on to saxophone in her high school jazz band, where she also took on the role of vocalist in front of the band. That led her to an appreciation of jazz, something that has stayed with her throughout her career. In college she was increasingly drawn toward music, and eventually enrolled in what is sometimes called the University of Jazz, Berklee College of Music in Boston, where she won a scholarship. Voice was half of her double major, the other being music production and engineering. She is quoted as saying "I wanted to be able to remove the wall between the technical and creative aspects of music. It was important to be free to follow my instincts in a recording studio."

She performed primarily a singer, working with a Boston area jazz band. She came rather late to composing. Like many musicians, Ms. Palmer held down so-called "day jobs," which included being a water aerobics instructor and selling clothes. But she decided that the time had come for her to devote herself to writing so in her off time, she spent about two years working on material, and collaborating with others, some of whom are represented on her debut CD. She followed some of her musical cohorts to New York, settling into Gotham in 1994.

Ms. Palmer's varied influences, including poets she admired from Maya Angeliou to Rickie Lee Jones, come together on her eponymous CD, which she co-produced with Kenny White. White's other clients have included Shawn Colvin and Marc Cohn. The result is an album that's as interesting as it is enjoyable. Her lyric writing consists mainly of love songs, which often go well beyond the Platonic. The styles covered range from the sensitive folkie to the rockier, with everything from spacey guitars to hip-hop drum machines to a string quartet appearing in the accompaniment. At times it can be sonically reminiscent of Suzanne Vega's quirky 99.9 Farenheit Degrees. album, sometimes jazzy like Rickie Lee Jones -- in fact her vocal inflections often recall Jones, and her sense of the unexpected in arrangements will be familiar to fans of Jane Siberry. That underlying jazziness can also hint at Joni Mitchell. It's a fascinating and original-sounding record, with its innovation coming from the clever blending of influences, along with very good arranging and studio production.

Among the regular players on the album are people from her performing band plus some notable guests, such as iconoclastic jazz-rock guitarist Bill Frisell and guitarist John Leventhal, who has worked with Suzanne Vega, and pop star Me'shell NdegéOcello on bass. Co-producer Kenny White is heard on keyboards and co-wrote several of the songs with Ms. Palmer.

The album leads off with a song summing up the interesting blend of everything from hip-hop to string quartet. Five Little Birds features a drum-machine beat played partly by a rhythm box and partly by a real drummer. Bill Frisell appears with his spacey guitar, while Ms. Palmer's vocals, performing her cryptic lyrics, can be reminiscent of Jane Siberry. <<>> The string quartet makes its entrance toward the track's finale. <<>>

One of the more-than-Platonic love songs is Different Languages. The track is another interesting one with its motley collection of influences. Here Ms. Palmer's vocal approach can hint at Rickie Lee Jones, while the curious march-like arrangement boasts a bass clarinet as part of the group. <<>>

A very different facet of Ms. Palmer comes through on a piece called Sal the Gardener. The accompaniment is piano with string quartet. The mix has a Sixties Beatles quality with the vocals all the way to one side in stereo. <<>>

The other extreme comes on Lickerish Man, with its funky beat, samples, and Ms. Palmer doing Michael Jackson-style hyperventilation. The bass clarinet, played my Michael D'Angelo, and the combination of the beat and the jazzy piano reminds this listener of some of Miles Davis' latter work. <<>>

Another track with a distinctive blend of musical ingredients is Wide Open Spaces, which has hints of 60s folk rock and soul. <<>>

One of the more interesting sets of lyrics come on Fourteen Year Old Moment, which as near as I can figure it out, is about the breakup of a marriage. Again there is a creative blend of the new and old, with the funky rhythm hinting at both the 1970s and the hip-hop 90s. <<>>

My own favorite piece is Oxblood 2x4s, a set of odd musical reminiscences that probably requires an explanation to be properly appreciated. Bill Frisell and the string quartet, nicely arranged by Kenny White, are prominent. <<>>

The album ends with one of its more laid-back tracks, Safety Belt, another of those songs with vague but somehow haunting lyrics. <<>>

Holly Palmer, by the New York-based singer-songwriter of the same name, is a very auspicious debut recording by an artist who draws on a very wide range of influences from jazz-singers of the past to the current hip-hop scene. She is an outstanding singer whose appealing style easily slips into the various genres from which she draws, while her original material hints at sources ranging from Rickie Lee Jones to Joni Mitchell to Jane Siberry.

As commendable as the music is, one of this album's great strengths is its first-rate production and arranging. Ms. Palmer and co-producer Kenny White successfully integrate seemingly conflicting genres, and give the songs greater interest. That eclecticism extends to the recorded treatment, which can effectively mix the mechanical-sounding hip-hop drum machines and samples, with the breezy feel of a human drummer playing with brushes, and combine the spacey high-tech guitar of Bill Frisell with the formal-sounding string quartet. The mix, by Roger Moutenot, is nicely handled and sonically creative. The only fly in the sonic ointment is some dynamics-robbing compression applied in the CD mastering, which seems to be standard practice anymore at most major record labels, as if they were in a CD loudness competition.

A folkie with an acoustic guitar Holly Palmer is not, but as a singer-songwriter, she has emerged as one of the bright lights of 1996.