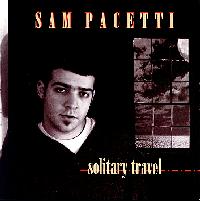 There is a great tendency in the pop music world to get more and more elaborate with production, bringing in backing musicians, adding more studio tricks or generally trying to pump up the sound of the music. In the case of a lot of commercial pop, this sort of thing can be perfectly justified. When you don't have a lot of musical content to begin with, the studio gloss can be all the record has going for it. Even among high quality singer-songwriters, who can usually convey their music with just vocal and acoustic guitar, their records often have a fair amount of studio production.

This week we have an album that is the complete opposite, a record so simple and uncluttered in instrumentation that it really stands out. It's the debut by a young Floridian named Sam Pacetti appropriately entitled Solitary Travel.

Most acoustic folk-style performers are singer-songwriters with their guitar providing their accompaniment, usually at a competent but not exactly virtuosic level. There are some exceptions such as Bruce Cockburn and Brooks Williams who are outstanding guitar players as well as first-rate singer-songwriters. On his album, Pacetti is a guitarist first, then a composer, and an occasional singer. In fact more than half of Solitary Travel is instrumental, and all of it is solo with just Pacetti and his guitar.

Sam Pacetti is only 22 years old and a resident of St Augustine, Florida. His record company biography says he learned flamenco-style guitar at an early age from his Cuban grandfather, studied classical guitar in his teens, then became a protege of the late Gamble Rodgers, the great Florida guitar picker and story-teller, during the last year of Rodgers' life. The teen-aged Pacetti was called on to play Rodgers' trademark Deep Gap Salute at his funeral, since Pacetti was the only one in the area who could play the fingerpicking showpiece well enough.

Now through some good fortune and the gift of a benefactor who provided him with the funds to produce the album as a Christmas present, Pacetti has made this wonderful recording that highlights his exceptionally tasteful acoustic guitar work and worthy compositions, both instrumental and with lyrics. I'm impressed that at such a relatively early age, he has gone beyond imitating any particular player or style. He draws on Irish and Celtic influence. He does attribute one arrangement to English folk guitarist Martin Simpson, and exhibits influence from that school of playing especially with some of the pieces in open tuning. But one can also hear some Southern-style fingerpicking and even a little jazziness in his playing. He is also a literate lyricist and a pleasant vocalist, though the album is mixed so that the guitar work is emphasized. And all of it is recorded without overdubs, studio effects, or except in the case of two short hidden tracks at the end, any backing musicians. With Pacetti's level of musicianship no added players or production are needed, and the sheer intimacy and clarity of the CD's sound makes it stand out as a refreshing change even in the acoustic folk world.

The CD begins with one of its six solo guitar instrumentals, an original called Brian's Rapier. The piece draws on British Isles influences with its little ornamental notes and turns, and the occasional stops. <<>> Like many of Pacetti's pieces, this composition takes several musical directions during its course, turning to a more upbeat American-fingerpicking style section. <<>>

The first vocal is a traditional American folk song called Shawnee Town whose arrangement Pacetti credits to English guitarist Martin Simpson. It comes off as somewhere between vaguely English-sounding and bluesy. <<>>

A kind of virtuoso American fingerpicking style showpiece is Pacetti's original composition Triplesec, which, as is Pacetti's wont, includes a number of different sections taking various directions, once in a while hinting at Leo Kottke. <<>>

The most lyrically fascinating song is The Lion and the Child, which takes the form of a wrenching dialogue between a father and son, in which the Civil War is a factor. Despite the interesting story, the guitar work also stands out. <<>>

Among the vocals are a couple of love songs. One is Saturday's Revival, a kind of narrative of a time together. <<>>

In listening to the instrumental called Ascension the word that came to mind was stream-of-consciousness, as the piece moves from one musical motif to another. The guitar work on this somewhat slower piece is typical of Pacetti's high standards. <<>>

Another love song is called Time, which despite its good lyrics, would make a very nice guitar instrumental by itself. <<>>

Closing the album are two short undocumented throwaway tracks of jamming with some unspecified musicians including a percussionist and a fiddler. <<>>

Sam Pacetti's debut album Solitary Travel is a very impressive recording from a 22-year old acoustic guitar virtuoso who already has developed his own style that effectively blends his influences without sounding like any single one of them. Though he would be a respectable singer-songwriter in his own right, it's his guitar playing that is given the emphasis on this CD, and Pacetti certainly has the "chops" as jazz musicians say.

Sonically, the album is an audiophile delight. The recording is very clean, bright, and refreshingly free from studio effects, with even simple reverberation almost entirely avoided. The dynamic range is also largely unfettered by any compression, making Solitary Travel an especially enjoyable CD on a good stereo system. The producer was Gabriel Valla and the engineer was Ronnie Cates in this Gainesville, Florida-made recording. They really did their job right.

Though it says something about the music business that the only way Sam Pacetti could make his record was by a friend providing the funds for him to do it on his own, it's great that he did make this debut recording, and it now has some national distribution through the Illinois-based Waterbug folk label. If you are a fan of folk-style acoustic guitar, or just want to hear some very honest, unpretentious musicianship unfettered by attempts in the studio to turn it into something else, then Solitary Travel is a most worthwhile CD to seek out.