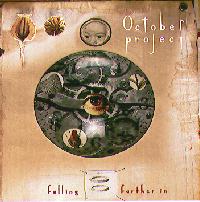 While an increasing amount of pop music is showing Seattle's grungy edge, there's also a faction that is taking a decidedly more mellow direction. Acoustic singer-songwriters are of course in abundance, but there are also some electric bands and artists who borrow a little from New Age influenced styles, along with a bit of the art-rock of years ago, such as the group Renaissance to come up with an interesting new blend. Sarah McLachlan and Loreena McKennit are two examples of artists who are gaining a degree of popularity with such a sonic amalgam.

This week's album is another prime example. It's the second full release by a New York-based group called October Project. The album is entitled Falling Further In.

October Project traces its origins back to the late 1980s when principal composer and keyboard man Emil Adler and his guitarist friend David Sabatino built a recording studio into a garage in New Jersey, in an effort to do something other than play covers tunes in bars. Adler began collaborating in the studio on some projects with another keyboard player Marina Belica and her lyricist friend and former Yale roommate Julia Flanders. They added percussionist Urbano Sanchez and began working toward forming a band. They had a performance planned to take place in October -- though it eventually slipped to November. A file folder with their notes for the event, with the label "October Project" became the name of the band. Emil Adler served as the group's musical composer, while the non-performing Ms. Flanders wrote the words.

But the most distinctive member of the group would not come until later, in a chance meeting on a New York street, when through a mutual friend lyricist Flanders met Mary Fahl, a classically trained alto vocalist who had spent some time in Holland performing with expatriate American rock bands. It was Fahl's smoky voice with its admirably wide range that has become the centerpiece of the group's sound. The combination of Ms. Flanders' evocative and poetic lyrics, and the blend of classical and experimental tendencies among the various band members -- especially with two keyboard players in the group -- is what gives October Project's music its arty and often ethereal sound.

Their eponymous debut album was released two years ago in October 1993, and with a good deal of touring and opening for Sarah McLachlan and the Crash Test Dummies, they have managed to sell 200,000 copies so far, according to their record company.

Now they are out with Falling Further In, and for this recording, they have altered their sound a little -- bringing in a wider range of influence from hints 1960s folk to hip-hop style drum machine rhythms. Though they recorded in the same Nashville studio they used for their debut, this time, the producer was Peter Collins, a Briton who had been known for his work in heavy-metal rock, but who greatly distinguished himself on the last Indigo Girls release. It was the band themselves who wanted to go for a stronger rhythm section, but it is probably not a coincidence that the recording bears influence from different aspects of Collins' career, from the British art rock to the folkiness of Indigo Girls.

The result is a step beyond their fine debut album, and a recording that is both musically attractive and fascinating, with elements that are very 1990s in sound, and an aura that seems almost to have come from another time and place. The material is a nice blend of the poetically vague lyrics with a musical setting can get close to pop at times, but is always tasteful and interesting.

In addition to the six founding members, the album's liner notes refer to three additional "core" musicians, bassist Michael Visceglia, drummer Craig Thatcher and another guitarist, Marc Shulman. In addition, there are some studio players brought in for certain tracks, including a string section, and harmonica man Micky Raphael, a long-time associate of Willie Nelson.

Leading off is a piece called Deep As You Go, one of several lyrically intriguing love songs. As she does on many of the tracks, Marina Belica provides harmonies to Mary Fahl's vaguely melancholy vocals. The arrangement starts with acoustic guitar and mandolin before the string section makes its tasteful appearance. <<>>

One of the more interesting tracks illustrating the wide-ranging collection of ingredients the group combines on this album, is a piece called Something More Than This. The song about a love lost, combines folky acoustic guitars, the hip-hop drum machine rhythmic line, the string section, and a prominent acoustic piano. <<>>

Another outstanding track is Johnny, whose lyrics are a bit more of a narrative than most October Project songs. Again, the complexity of the arrangement is worthy of best of art rock of days of yore. <<>>

One of my favorite tracks is Funeral in His Heart, another song of love lost, with rather sad lyrics, but with a musical setting which is by contrast decidedly upbeat. <<>>

Falling seems to be a lyric motif running throughout Falling Further In. Another highlight of the album is called After the Fall. The musically upbeat song laments the loss of innocence, while the arrangement recalls the writing style of Sting of the Police. <<>>

One of the group's strengths is their ability to get arty without reaching the level of pretentiousness. The title track Falling Further In is one occasion where October Project dances on the edge of being overblown. The arrangement this time gets a little too busy for this normally sparce-sounding group. <<>>

The album ends with perhaps its most conventional pop song, at least in style. If I Could sounds like an old-fashioned pop love ballad, with perhaps a bit of the Beatles' Let It Be album thrown in. <<>>

October Project's new second release Falling Farther In is a fine album that is an eclectic mix of ingredients spanning 1960s folk, including in the lyric style, British art rock, and hints of 1990s rhythms. Mary Fahl's distinctive deep alto vocals provide the group's sonic trademark, but October Project has also evolved an interesting style of both writing and arranging. On the new album, with producer Peter Collins, October Project has moved forward, expanding their sound and trying some new ideas, most of which are quite successful. This kind of music could easily descend into being very pretentious, but this New York based group almost always keeps things tasteful and musically interesting.

Sonically the album is rather nicely done, with a clean mix that hints at the ethereal nature of the music without getting buried in electronic effects. Though there is a certain amount of compression on the recording, at least some dynamic range is preserved for the ebb and flow of the music.

October Project's Falling Further In is a very enjoyable album that could win a degree of commercial success while still maintaining integrity with a creative and highly original sound.