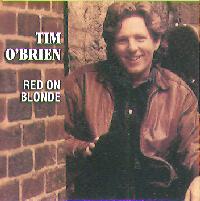 Ever since the early days of Bob Dylan, singer and songwriter have been almost inseparable in contemporary music. There are some exceptional singers, but for the most part, especially in folk-oriented music, the vocalist sings in order to say what she or he has written. Dylan epitomized that and inspired generations of literate songwriters, including many who are stylistically miles from the concept of the folksinger.

These days, however, albums of non-original music seem to be a bit of a trend. There are tribute records by various artists doing one composer's songs, while there are others by a single artists, who are often songwriters themselves doing various other people's music. And there are occasional what could be called "songbook" records by one artist concentrating on the songs a single writer. Recently Holly Cole did a collection of Tom Waits songs, and Tony Rice released a CD of Gordon Lightfoot compositions.

This week we have something that has certainly been done before -- a collection of Bob Dylan songs. Such tributes go back to the 1960s, but this one is by a fine composer in his own right, Tim O'Brien, who gives Dylan a bluegrass- and New Acoustic-oriented treatment. The result is a fine recording whose quality comes in the execution rather than in the concept or originality. In a way, it's a tribute from one fine songwriter to another who was a great and profound influence.

Tim O'Brien is a Colorado based mandolin player who came to prominence with the bluegrass band Hot Rise, and their Western Swing alter-ego Red Knuckles and the Trail Blazers. Hot Rise started like many bluegrass bands doing traditional material, but O'Brien began to do more and more writing for the group, and in so doing, established the group's reputation for its songs is much as for its picking. Since then O'Brien has been concentrating on his writing and has been releasing a series of fine records on his own spotlighting his compositions, with his sister Mollie -- usually doing covers and traditional songs -- and with his current bluegrass trio the O'Boys. As a composer, O'Brien has seen his songs recorded in Nashville with two of his compositions, The Way the Wind Blows and Untold Stories becoming Top Ten Country hits for other artists. In the past few years, O'Brien has been remarkably prolific, averaging about two or three albums a year. Now the ruddy-haired O'Brien has taken yet another direction with his new collection called Red on Blonde.

O'Brien, in his liner notes, recalls that the first time he heard of Dylan, back in the mid 1960s, was with his sister when they watched one of the musical TV shows of the day such as "Shindig" or "Hullabaloo," which did a tribute to the songs of Bob Dylan. Tim got a scolding from his older sister when he asked who Dylan was. He said he learned his lesson, and has been following Dylan's career's ups and downs over the years, and O'Brien does point out some of Dylan's shortcomings in his CD notes. He also makes some interesting observations, such as Dylan's following a folk music tradition like Woody Guthrie before him to use older ballads as the melodies for his lyrics. With that in mind, O'Brien decided to try performing some Dylan songs in a mainly old-time folk and bluegrass setting, and the result is this album. The project actually started when someone suggested to O'Brien that one of Dylan's rockier tunes from the Bringing It All Back Home album, Maggie's Farm might make an interesting old-timey song. So once the concept presented itself, O'Brien set about gathering a collection of Dylan songs, most of them ones few others have covered, from early material, though Dylan's Christian period up to the 1989 album Oh Mercy. And O'Brien manages to add something interesting to each composition with an eclectic arranger's ear and an appreciation that comes from being a songwriter himself.

O'Brien works with the O'Boys, guitarist Scott Nygaard and bassist Mark Schatz in this Nashville-made recording. They are joined by banjo man Charlie Cushman, ubiquitous Dobro meister Jerry Douglas, plus a number of notable background vocalists including country star Kathy Mattea, and Tim's sister Mollie O'Brien. Though the emphasis on this album is on the acoustic, Red on Blonde does live up to O'Brien's reputation as being eclectic. The arrangements range from bluegrass to old-time Appalachian to a bit of Nashville to a weird little almost acapella version of Subterranean Homesick Blues. O'Brien chooses a fair number of protest songs, but he also includes some of Dylan's eccentric inscrutable works and one or two old classics.

The album begins with one of the semi-protest songs, Señor (Tales of Yankee Power). O'Brien gives it a bluegrass treatment but with a plaintive sound. The result is typical of the high quality of this album. <<>>

One of the classic Dylan songs included here is Farewell Angelina which was made famous first by Joan Baez. This is one of the songs O'Brien points out is built on the melody of an old-time ballad. So he gives it that kind of approach, with some very tasteful backing. <<>>

Given an energetic bluegrass treatment with Charlie Cushman's banjo is Tombstone Blues. The venerable tune gets a fresh new sound that works surprisingly well. <<>>

More in the New Acoustic-style vein is a fine rendition of a song from Dylan's 1970 New Morning album, Father of Night. O'Brien says he also adds some gospel influence, given the lyrics. Jerry Douglas' Dobro is a excellent addition. <<>>

From Dylan's later period is Everything Is Broken a song on the 1989 Oh Mercy album. O'Brien and company get rather electric using what sounds like a fuzz Dobro, giving the tune a bit of a garage-band sound. <<>>

One of Dylan's best-known protest songs Masters of War is given a fascinating treatment. The sole accompaniment is from O'Brien's fiddle and Cushman's banjo. The sound is a mournful old-time Appalachian lament. <<>>

Also with an old-time traditioal sound is Oxford Town, another of Dylan's Sixties protest songs about the integration of the University of Mississippi. Here, the barn-dance style of the music contrasts with the pointed lyrics. <<>>

Dylan's Christian period is represented on Man Gave Names to All the Animals, which O'Brien calls Dylan at his silliest. But O'Brien decides to treat it as a children's song, done with an acoustic reggae beat. <<>>

Probably the most fun on the album comes with Subterranean Homesick Blues. O'Brien writes in his liner notes of Dylan being one of the first rappers. That's not quite true, but O'Brien and with his mandolin is joined by Mark Schatz doing "hambone" or body-percussion, and they do it as a kind of bluegrass rap. <<>>

One of my own favorites on the album is a song from Dylan's Planet Waves album with the Band, Forever Young. O'Brien gives a tasteful New Acoustic style treatment, with his fine vocals being a focus. <<>>

The album ends with the closest to Nashville country this album has to offer. The 1964 song Lay Down Your Weary Tune wasn't released in Dylan's own version until his Biograph album a few years ago. Though the song is a good choice for the album, the arrangement here is not very special. <<>>

Over the years, everybody from Flatt and Scruggs to Duane Eddy have done albums of Bob Dylan songs. Versatile acoustic musician Tim O'Brien, who is no slouch as a songwriter, adds his own contribution to the Dylan covers catalogue with one of the finest yet. The combination of O'Brien's fine vocals, his appreciation of Dylan as a songwriter and O'Brien's great sense of acoustic eclecticism makes this an album that most Dylan fans are likely to enjoy greatly. It's also another outstanding record from O'Brien who continues to win fans with his constant musical explorations, and it's likely also to please those who enjoy the instrumental creativity of the New Acoustic scene. Of course, there are quite a few listeners in all three categories.

Sonically, the album is also a treat. The sound is admirably clean. This Nashville recording's mix was nicely done by O'Brien's long-time sonic associate Kevin Clock in Denver, who has a great ear for acoustic instrumentation. There is also good dynamic range.

Red on Blonde may not contain any new material from O'Brien, or for that matter any previously un-recorded Dylan songs, but it is an interesting and thoroughly enjoyable set of the compositions of one of America's great songwriters by performed someone who iwqith considerable songwriting credentials and, as this album reminds us, one of the New Acoustic scene's outstanding performers and arrangers.