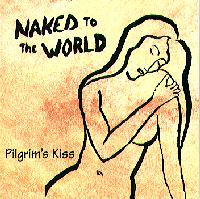 Naked to the World: PILGRIM'S KISS -- by George Graham

While the alternative rock scene has led a lot of bands to turn up the grunge on their electric guitars, there has also been something of a minor trend on the opposite direction. Perhaps inspired by a series of acoustic concerts put on by an otherwise malignant commercial cable music video channel, some well-known electric artists have been releasing acoustic concert albums, some with excellent results. That may have served as a catalyst for some new, what I suppose could be called acoustic rock bands.

Here in the mid 1990s, the acoustic folk scene is thriving with a plethora fine non-electrified singer-songwriters releasing a virtual torrent of generally worthy albums. But these are considered solo efforts; the artists in question usually perform by themselves, rather than as a band. However there are a few acoustic groups appearing which are for all intents and purposes rock bands, except that their guitars are not electric.

This week we have one of the finest yet to appear. The group is called Naked to the World, and their new release is actually their second CD, called Pilgrim's Kiss.

This Los-Angeles-based sextet got its start as a duo in the first part of 1993, when singer-songwriter Kevin Fisher, who had been performing solo around LA was approached by a classically trained woman violinist named Daryl who uses only the initial of her surname, "S."

Fisher works as a staff songwriter for a Nashville publishing company. Interestingly, he grew up listening to Deep Purple and Led Zeppelin, and played in several very electric bands before deciding that acoustic instrumentation allowed the listener to appreciate the song better. A fondness for poetry and a college degree in literature also came to bear on his path to being a songwriter.

Daryl S. began her violin studies at age four, and went on to the San Francisco Conservatory and a degree in viola from University of Colorado at Boulder. She also studied jazz with members of the Turtle Island String Quartet, and has worked with the Santa Monica Traditional Folk Music Society. Three years ago, after hearing Fisher in performances, she proffered her services, and they decided to make a band out of it. They added guitarist and mandolinist David James, a long-time friend of Fisher's and whose first instrument was also violin; percussionist Jeff Gross; who was followed by Texas-native bassist Darby Orr, after much discussion of whether to use an electric or acoustic bass. Orr plays the electric variety. Rounding out the current personnel is drummer David Casanova, who was at one time a member of the group Dakota.

Two years ago, Naked to the World released an album on their own label with rather limited distribution. But they have been touring fairly busily, mainly appearing across the Southwest and South, including in the songwriter's haven of Nashville, where they have been very warmly received. Now they are out with Pilgrim's Kiss.

In keeping with Kevin Fisher's philosophy, the songs are central to Naked to the World's music. Fisher is, in many ways, a classic folkie -- writing literate, poetic, often introspective lyrics, usually about various facets of love -- the happy and the sorrowful. But he also is fond of a memorable melody, and has obviously listened to the Beatles and Simon & Garfunkel in his life. With several of this album's songs in waltz time, sometimes with sad, almost poignant melodies, there are distinct echoes of traditional folk. The mostly acoustic instrumentation with fiddle and mandolin, underscores that association. Fisher does all the lead vocals in a rather nondescript but pleasant and expressive voice. The combination of the exceptionally fine songs and the tasteful instrumental arrangements makes this an instantly likable album for those who appreciate good songwriting.

Oddly, the album begins with probably its weakest song, the title track Pilgrim's Kiss, about the closest thing on the album to a rock tune. The lyrics are typically intelligent, but both the arrangement with a drum machine line, and Fisher's vocals fail to meet the standards heard elsewhere on the album. <<>>

Following is one of the most poignant set of lyrics on the album. My Father and Me, is an elegy to one's Dad, written on the occasion of casting his ashes to the sea. An interesting twist is the happy melody the song carries. <<>>

With a more traditional folk sound is Weep Like a Willow, an absolutely wonderful song about looking at life's missed opportunities. The song's waltz rhythm and Daryl S.'s fiddle make this excellent piece of writing even better. <<>>

Another highlight of the album is The Garden of Rodin, whose opening lines could be interpreted as being about either a painter's model or a prostitute. <<>>

A track called Blame It All on You, takes an interesting approach to the love song. The lyrics tick off the all the good things that have happened since the protagonist fell in love, while a contrast to that is the minor-key tune that imparts a bittersweet quality. <<>>

Naked to the World shows their Beatles influence on another fine song called Stronger Than the Tide. The string arrangement played by Daryl S. recalls the Fab Four's Eleanor Rigby, while the tune is reminiscent of For No One. Again, it's a nice piece of writing. <<>>

Another really sad song is Fifty Four Years, written from the standpoint of a spouse facing the impending death of his or her partner of over a half century. <<>>

One of the more unusual situations considered on the album comes on Give Your Hand. The beautiful scaled back acoustic arrangement provides the setting for a tale of someone attending the wedding of his former lover to someone else. <<>>

There are a lot of fine tracks on this album, but probably my own favorite is a fairly straightforward love song, involving that old trusty standby of love song writers, the moon. The Amazing Moon more or less sums up the Naked to the World sound, with an attractive melody, literate lyrics and a very tasteful performance. <<>>

The album ends with an undocumented bonus track. After all those serious, deep lyrics, the group goes out with a fun take on the video-dominated commercial music business, in a song which for the purposes of discussion, we'll call Bitchin' Hair. The very informal recording makes the tune even more of a hoot. <<>>

Pilgrim's Kiss the new album by the Los Angeles-based sextet Naked to the World is a downright superb album that combines world-class songwriting with a very tasteful acoustic instrumental setting. Kevin Fisher's songs run from the sad to the humorous, while maintaining a melodic sense that is rare even among the best folkies. Violinist Daryl S. adds much to the group's sound with her mixture of classical and folk influences, while David James' assortment of mandolins and other string instruments further enhances the general folkiness of the proceedings.

Sonically the album is also tastefully done. The group recorded it themselves, with Fisher and bassist Darby Orr producing and Orr engineering. The mix is unfettered by needless studio effects, and the acoustic instrumentation is generally well-recorded.

Acoustic music is definitely making a strong showing in terms of the number of albums released, though acoustic bands are still fairly uncommon. Naked to the World is indeed an uncommon band in more ways than one, and their new release Pilgrim's Kiss, already ranks in my book among 1996's finest albums so far.