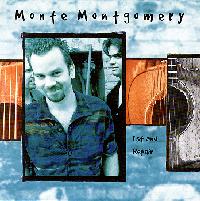 Texas has proven to be an active breeding ground for both singer-songwriters and guitarists. This week we have the impressive debut album of someone who comes across strongly in both respects. Monte Montgomery's CD is called First and Repair.

Rock guitar mavens almost by definition concentrate on electric guitar, and singer-songwriters tend to play the acoustic version of the instrument. Montgomery is distinctive in that he plays rock on his acoustic guitar, and does his usually-driving, upbeat songs in that musical context, playing in essentially a rock power trio centered on his acoustic guitar. He is also a rather interesting lyricist, not so much in what he says, but in how he says it.

Born in Birmingham, Alabama, Monte Montgomery moved to San Antonio, Texas, at age 13. His first instruments were piano and trumpet, but he switched to the guitar, learning from his mother Maggie Montgomery, a country singer-guitarist of some repute. Among the influences he cites are an eclectic combination of Mark Knopfler, Bruce Cockburn, Stevie Ray Vaughan, and Lindsey Buckingham of Fleetwood Mac. He has been part of the Austin music scene for some time now, working with his current band, Chris Maresh on bass and Phil Bass on drums, for the past three years now. Montgomery and band have been attracting increasing attention in the Lone Star state, having opened for people ranging from Bob Dylan to Willie Nelson.

In some respects, Montgomery's approach reminds me of The Who, in which Pete Townshend would often use acoustic guitar as the center of some energetic songs. For Montgomery, the acoustic guitar is not only the center, but on most of the tracks, the sole guitar. He plays it like a rock guitarist, with combinations of power chords and hot licks. When added to his upbeat songs running in influence from rockabilly to reggae and his honest, unpretentious, very likable vocals, the result is an album that quickly grows on one the more one listens. Essentially, 1st and Repair strips away everything but what counts to the song and the performance: guitar playing on an instrument with no electronic effects to disguise the real playing going on, and no added production beyond the basic band to muddy up the songs.

Most of Montgomery's original material consists of love songs, about equally divided between lamenting lost loves and celebrating new ones. The subject is well worn, but Montgomery is clever with a turn of phrase and his literate vocabulary and sentence structure is a bit out of the mainstream for rock lyrics. This generous CD features a dozer's dozen songs ranging from succinct rockers to an extended reggae-influenced acoustic guitar showcase. Musically, the songs, though outwardly simple, usually have some interesting things happening, such as guitar riffs that don't go quite where one would expect, or bridge sections of songs that show real composing creativity.

Things get under way with one of those brief rock-driven songs, Movin' On, which introduces the energetic acoustic rock sound of Monte Montgomery and band. <<>>

The title song, 1st and Repair, is a reference to a street address. Again, the acoustic guitar-driven rock song packs a considerable energy level, while also showing Montgomery's bent for an interesting turn of phrase. <<>>

In a more laid-back mode is Leaving Paradise, another lyrically-sad song about missing someone. It's an excellent piece of writing that in an earlier day might have been a hit as a soul-styled ballad. <<>>

The album is not all acoustic. Montgomery gets out his electric guitar for some overdubs on Love to the People, though the funky song still features the acoustic guitar at its center. <<>>

Montgomery gets low-down and bluesy on River, whose lyrics seem to be about heavy weather. The singer-songwriter puts in some respectable bluesy slide guitar on this highlight of the album. <<>>

One of the tunes that causes me to draw a parallel between Montgomery and Pete Townshend of The Who is Pocket Change. The song is classic rock in form and direction, and given a great performance by the trio. <<>>

Montgomery shows his folky side on a track called It's Alright, in an appropriately folk-influenced waltz time. Here we have a love song in which the protagonists are very much together. <<>>

For me about the only disappointing track is The Fall, a which shows more mainstream pop influence, complete with some cliches. The vocal style is not Montgomery's greatest strength, but the song's lyrics are as good as any on this literate CD. <<>>

The album ends with a showcase for Montgomery's impressive energized acoustic guitar. The 10 minute-long Love Come Knockin' is based a reggae beat and after the strong vocal section by Montgomery, <<>> launches into an extended guitar solo, made all the more impressive by the fact that the arrangement is just the three piece group, with no additional instrumental parts added. <<>>

Monte Montgomery's new debut album 1st and Repair is both appealing and interesting. Montgomery is an impressive guitarist, essentially playing energetic rock guitar on his acoustic instrument. He is also a first-rate songwriter and literate lyricist. He joined by a tasteful rhythm section who add much to the energy level of this CD, providing the drive to make this as strong a record as it is.

Sonically, the album is also tastefully produced and recorded. Montgomery who co-produced the 1st and Repair with Tab Bartling, kept it purely a trio effort, and did only minimal overdubbing, just some added guitar parts and backup vocals. It's essentially the band as they would perform live. The sound of the instruments is pleasing and shows good clarity, but the overall audio is compressed, robbing some of the dynamic range that the use of an acoustic guitar would permit. Also in the technical realm, this is a dual purpose CD, playable on a regular stereo system, but is also a CD-ROM for computers, with among other things, four short videos of Montgomery performing with his band.

Acoustic rock may seem like an oxymoron, but Texas singer-songwriter and guitarist Monte Montgomery nicely personifies the concept on this very appealing recording, that keeps sounding better after each listen.