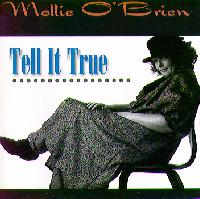 The last few years have seen a healthy resurgence of the singer-songwriter, with a great number of outstanding albums released on both independent and major record labels. They run the gamut of styles from the solo folkie to the very eclectically instrumented. But what about the non-songwriting singer? Back before the rock & roll days when crooners were king, composers hardly ever sang their own music on record. Even when the folk boom of the early 1960s first started, most well-known performers did either traditional or other people's music. But ever since Bob Dylan, it is almost almost a given that folkies write most of their own material. Judy Collins and Joan Baez started out as non-composing vocalists but over the course of their careers moved toward writing more of their own music.

This week we have one of those relatively rare albums by a fine folksinger who is not in the practice of writing her own material. She is Mollie O'Brien, and her new release is called Tell It True.

To folk and acoustic music fans, Mollie is probably best known as the sister half of the sibling duo of Tim and Mollie O'Brien, formed with her younger brother who was a founder of the Colorado bluegrass outfit Hot Rize. It was in 1980 that Tim convinced his married sister to come from Manhattan to Boulder, Colorado, to start performing with him for some festivals. They sang with those rare vocal harmonies that come from growing up together. Tim meanwhile, launched a solo career, becoming increasingly respected as a songwriter, with some of his songs being recorded by Nashville country artists. Tim also has a simultaneous musical project called the O'Boys, doing more straight ahead bluegrass, as opposed to the sophisticated so-called "new acoustic" music he has recorded under his own name. Tim and Mollie have recorded three albums together, mostly of traditional music featuring fine, creative acoustic backing with some of the significant figures in the New Acoustic realm in attendance. Mollie had recorded her own solo album in 1987, and was part of a group described as having the most carefully-pronounced band name, the Mother Folkers.

Now Mollie O'Brien is out with a new recording under her own name, produced by and featuring rather prominently her brother Tim. Though Tim doesn't sing harmonies as much as on the joint Tim & Mollie O'Brien albums, Tell It True is in much the same vein, in terms of sound, which means it's just superb.

Ms. O'Brien has a remarkably clear, appealing voice with dead accurate pitch and an easy-going delivery that belies her vocal prowess. And as on the joint albums with her brother, the accompaniment is by some of the finest players on the New Acoustic scene, including Tim, who is no slouch on the mandolin, Dobro virtuoso Jerry Douglas, who has produced Tim's albums, Darol Anger of the Turtle Island String Quartet on fiddle, Scott Nygaard on guitar and Mark Schatz, who worked with David Grisman and is now part of the O'Boys, on acoustic bass. The O'Brien's friend and fellow Boulder-resident John Magnie of the Subdudes lends his keyboards to the proceedings.

The album ranges from very traditional material to contemporary songs, from gospel to jazzy to Western Swing, and even includes a wonderful acoustic treatment of a Terence Trent D'Arby pop song. The selection is really interesting, something that is a luxury of not being the songwriter. And virtually every one of the dozen tracks is a gem with either Ms. O'Brien's vocal shining or the musical arrangements being brilliant, or both. The album provides some opportunities for instrumental solos, but the focus remains on Ms. O'Brien's instantly captivating vocals.

The album begins with a piece performed with what could I suppose could be called the classic "New Acoustic" sound, with bluegrass instrumentation in a very untraditional style. The song is called If I Live by Si Khan, a fine North Carolina songwriter who often writes about working people. This tune, however, is one of those "I miss you" lovesongs, and Ms. O'Brien sings it superbly. <<>>

One thing I noticed in listening to Tell It True is that almost half the songs are in a minor key. Some are sad-sounding, as you would expect, while others are bluesy or jazzy. One of the finest of the more introspective pieces is Northern Cross written by Leslie Smith. It's a song of longing and separation. Ms. O'Brien's performance is striking, while her brother Tim provides several of the instruments, such as the banjo and mandolin as well as doing some of those sibling harmonies. <<>>

Also in a minor key, but with quite a different mood is It Ain't Love, written by one John Hadley. The bluesy-jazzy arrangement swings gently with the addition of the drums. <<>>

Another song of rambling is Alaska, one of two songs on the album written by fine contemporary singer-songwriter Kate MacLeod. The band, including Jerry Douglas, Tim O'Brien and Scott Nygaard on guitar, cranks it up -- acoustically. <<>>

Representing another facet of this wide-ranging recording is Having Myself a Time, an old song from the swing-era, given an appropriate treatment by the O'Briens and friends, including violinist Darol Anger. <<>>

For me, one of the finest songs on the album is one written by contemporary folkie Dave Mallet and Danny O'Keefe, a respected pop songwriter during the 1970s. Never Got Off the Ground is a eloquent piece about plans postponed. The instrumentation is very understated, while Ms. O'Brien delivers the song with great elegance. <<>>

Bollweevil Holler is one of the traditional songs on Tell It True. John Magnie of the Subdudes brings in his accordion, and with the rhythmic feel of the tune, the arrangement takes on a Louisiana atmosphere. <<>>

The Western Swing influence comes on Henhouse Blues, which for me as close to a disappointment as this fine album comes. Ms. O'Brien's performance is lively, but the band just doesn't swing as well as they might. <<>>

A definite high point of the album is the wonderfully unexpected treatment of the Terence Trent D'Arby's Sign Your Name. The group gives the song a bit of a bossa nova feel, while Ms. O'Brien's vocal performance is enough to give one goosebumps. She and her brother also get to do more of their memorable harmonies. <<>>

The album ends with its other traditional piece, a plaintive gospel tune called When I Set Out for Glory, a further example of how Mollie and Tim O'Brien can put imagination and freshness into an old song, helped all the more by the outstanding musicianship. <<>>

Mollie O'Brien's new album Tell It True shows that you don't have to be a songwriter to make an excellent acoustic folk-influenced recording. While Ms. O'Brien has been making joint albums with her younger brother Tim in recent years, in which they share the vocal spotlight, this recording illustrates just what a fine singer Mollie has become. Her sense of taste, and her prodigious technique, disguised under an almost casual sound, shows her to be among the finest voices on today's folk scene. The album also illustrates the freedom a non-songwriter has in selecting a wide range of interesting, high quality material to include. Tim O'Brien is still quite in evidence as producer, multi-instrumentalist and occasional background singer, and he brings along some of the finest acoustic players around to add to this album's level of quality and taste. The result is a CD you'll just want to hear again and again.

Tell It True is also quite tasteful in the audio department. There are a few subtle electronic effects here and there, and sometimes Mark Schatz' acoustic bass doesn't sound as rich as it might, but overall engineer Kevin Clock, who has also worked on Tim O'Brien's albums, did a fine job. The recording has a refreshing lack of dynamics-robbing compression.

Fan of New Acoustic Music, folk and just plain good singing will find much to enjoy on Mollie O'Brien's Tell It True.