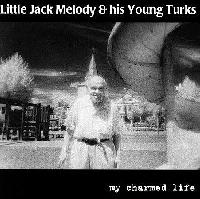 Increasingly, some of the more creative musicians of today are looking to the past for inspiration. Sometimes it can take the form of a borrowed guitar riff or two, an approach to arranging, or a sound that's totally "retro," almost completely re-creating a style from a previous era. And how far back performers look for inspiration covers a rather wide range these days, from throwbacks to the Seventies, retro re-creations of the Sixties, rockabilly from the 1950s, and even back to the pre-Big-Band music favored by the Squirrel Nut Zippers, who are now enjoying unexpected hit status among the alternative rock crowd.

There are also a lot of different approaches to this musical retrospection, from tuneful re-creations of particular styles, to near-satire, to music that can be downright weird. This week we have an album by a group that has been called "deeply weird" by Rolling Stone, who then adds "utterly fab." It's nostalgic music with tongue placed firmly in cheek by a Texas band called Little Jack Melody and His Young Turks. Their new, and third album is entitled My Charmed Life.

Little Jack Melody is the pseudonym for a former jazz-rock fusion bassist whose real name and previous musical identity is not revealed in this group's publicity material. After more or less dropping out of performing and taking a job as a house painter for a while, Melody settled down to married life and was again taken by the urge to to make music. A fan of Tom Waits and Kurt Weill, among others, Melody was inspired by a friend to take up early cabaret music in the Bertolt Brecht tradition. He was further moved by coming into possession of a photo of the German composer surrounded by instruments of the period, including a harmonium, a pump-operated reed organ. So Melody was determined to put together such a band. Thus was born Little Jack Melody and His Young Turks, based in Denton, Texas, home of another delightfully weird band, Brave Combo.

Rather than try to re-create one specific style of the era, Melody and company generate an eccentric and good-natured pastiche that runs from slightly-askew jazz to circus music, to something that sounds as if it might have come from a Fellini film, to a tango, with instrumentation that regularly includes a tuba, four-string tenor banjo, and a variety of novelty percussion instruments, while Jack Melody's slightly quavery lead vocal embodies both the eccentricity of the band and its spirit of good fun.

The Young Turks consist of Dave Dorbin, whose main instrument is the tuba, and who does backing vocals, Chopper Bergeron, who plays drums and percussion, Jon Cooke on keyboards, including harmonium and accordion, and Jacob Duncan, who plays saxophones and flute. This album has various guests, including additional horn and string players, plus a pianist and another acoustic bassist, for when Jack Melody takes up the banjo or other instrument. Melody is the usual bass player. The band is also not afraid to use some electric instrumentation, including a 1960s-sounding synthesizer.

All but one of the tracks are original pieces, and most are almost as interesting lyrically as they are musically, with literary, biblical and even archaeological references, along with something close to a love song.

The group's arranging is rather intriguing, since they really are not exactly re-creating styles of old, but borrowing from them, adding a healthy dose of eclecticism and cleverness and coming up with something that will leave even the listener who thinks he has heard everything scratching his head initially before being drawn into Melody's quirky melange.

The album begins with a song whose lyrics leave no doubt that this band is not entirely serious. The title song My Charmed Life is done as a kind of campy jazz waltz which serves as the vehicle for the hilarious lyrics extolling one's good fortune in life. <<>>

Almost the complete opposite, lyrically, is Close, No Cigar, whose smoky ballad arrangement provides the setting for a lament over missed opportunities. Again, tongue is lodged in cheek. <<>>

Another of the more amusing songs lyrically is Samba Ordinaire, whose words are the description of an utterly uneventful workday, while the band serves up kind of samba with some horn arrangements that sometimes sound like the old Tijuana Brass. <<>> There's a cameo appearance by David Ossman of radio comedy troupe the Firesign Theatre reading a stock report. <<>>

Two songs resemble mutant circus music. At Night You Hear the Trains, features rather serious and thoughtful lyrics, while the band serves up one of its best arrangements. <<>>

The following track, Kilroy Was Here is even more frantic musically, while considering up the famous ubiquitous graffito, speculating that the wag who paints "Kilroy Was Here" goes back to the caveman days. <<>>

One of the love songs is called Barbie and Ken, which presumably is about the toy dolls. Melody and company give it a more or less serious musical treatment with a tasteful string arrangement. <<>>

The group does one instrumental, allowing them to show their intriguing stylistic conglomeration. I Am Living at the Villa Bourghese is basically a tango with rock-style drums and a vaguely decadent-sounding saxophone solo. <<>>

Jack Melody and His Young Turks do one cover song, naturally enough a piece by German cabaret composers Kurt Weill and Bertolt Brecht, Alabama Song. The group serves up a somewhat anarchic version that nevertheless hold true to the spirit of the original. <<>>

The album ends with another samba-influenced song about a man and his career. Mr. Horizon is probably as close to a pop song as this very left-field album will get, and it's still rather far away. <<>> Toward the end, Melody and the Turks are unexpectedly joined by a children's chorus. <<>>

My Charmed Life, the new release by the Denton, Texas-based Little Jack Melody and His Young Turks is definitely an album by and for people who are bored with what the pop music scene has to offer. Dipping into a bunch of old styles from big band to tango, loosely based on pre-World War II cabaret, and having no scruples about throwing in anything else that might move them, this group creates music that can rightfully be called eccentric in the endearing sense. They never take themselves very seriously, and often put that sense of mirth into their lyrics, which can range from quite funny to downright intriguing with their literate and literary allusions. Not all their efforts are a roaring success, and sometimes Little Jack's quavery nasal vocals can border on the irritating, but for the most part, this is a very clever and fun record, once one gets over the initial disorientation, and the reflexive reaction of people who first hear the group, "What it this?"

Sonically, the album is decent. Jack Melody did a great job of producing himself, but engineer Steve Brown in Dallas uses too many rock studio techniques including some effects that seem out of place in this music that for the most part has one foot in the 1930s. But I suppose that could also be chalked up as being part of this album's wacky eclecticism.

With groups like the Squirrel Nut Zippers, the Asylum Street Spankers and Beau Hunks Sextette paving the way, Little Jack Melody and His Young Turks continue the march into the musical past, in this case with tongue in cheek.