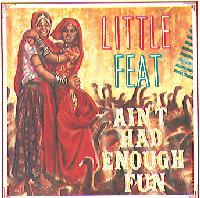 The number of performers who became famous in the late 1960s and early 1970s and who are still around making music is considerable. While some have either become artistically stagnant or descended to the nostalgia circuit, a surprising number continue to do some to their best work. Over the last couple of months, just on this album review series, we have had several examples of the latter category: John Prine, Tracy Nelson, Al Stewart, and Fairport Convention. This week we have yet another example an old group that hasn't lost it. It's Little Feat, whose new thirteenth album is called Ain't Had Enough Fun.

Little Feat had its beginnings around 1969, and released their classic first album in 1971. Led by acclaimed songwriter Lowell George, the group brought together an interesting mix of influences from blues and funk, to occasional country twang, to jazzy harmonic textures. Despite that eclecticism, one could always tell it was Little Feat from their infectious but quirky rhythms, and distinctive vocal approach, which was all the more interesting because several of the members took turns being lead singer. The group became one of those classic bands of the Woodstock Generation whose music most serious rock fans knew, but who never had themselves a hit, except when other people did Lowell George songs like Willin.'

After George died a lamentable rock-star death in 1979, the band continued on for a while, then broke up for several years. Around 1987, several of the long-time members, including keyboard man Bill Payne, guitarist Paul Barrere, drummer Richie Hayward, bassist Kenny Gradney and percussionist Sam Clayton decided to reconvene, adding guitarist Fred Tackett and former Pure Prairie League vocalist Craig Fuller. In 1988, they released Let It Roll, and although it was not exactly a commercial blockbuster, it put Little Feat back on the scene, not only as a recording band, but as busy touring group. The reformed Little Feat have kept plugging away, changing record companies twice since then, perhaps partially explaining their lack of commercial success, but keeping concert audiences on their feet.

For the new album Ain't Had Enough Fun, the group has undergone what would seem like its most significant change: Craig Fuller, tiring of the constant road work, amicably departed to be replaced by Shaun Murphy, marking the first time the band has had a female lead singer. Though she may be a new face to many, she has actually been singing backup vocals on the group's albums since they reformed seven years ago. In addition to her work with Little Feat, she has recorded with Bob Seger, Phil Collins, John Hiatt, Eric Clapton, Michael Bolton, Bruce Hornsby, and Glenn Frey.

The combination of bringing Ms. Murphy on board along with a distinct tendency on this album toward a New Orleans groove has really revitalized the group's sound and makes Ain't Had Enough Fun the group's best album since Let It Roll seven years ago. Long time fans may still miss Lowell George, but the reformed Little Feat has been gradually plotting their own new course, though with some bumps along the way. Their last album, Shake Me Up was generally considered a disappointment after a couple of strong records in 1988 and 1990. On the new album, the group emphasizes their strong points with irresistible rhythmic grooves driven by Richie Hayward -- who I think is one of the best drummers in rock -- the bluesy slide guitar of Paul Barrere and pleasing songwriting, as usual by several members of the group, with keyboard man Bill Payne being the most frequent contributor. Co-writing many of the songs on the album was Bill Wray, who co-produced the Ain't Had Enough Fun with Payne. Interestingly, Bill Payne is known for contributing the jazzy facet to the Little Feat sound, going back to tunes like Red Streamliner on Time Loves Hero, and the excellent title track to their 1990 release Representing the Mambo. But as close as the new album comes to that sound is one slower tune and a couple of Steely Dan-type chords here and there.

The group notes that there are thirteen songs on this, their thirteenth album, and with only two tracks under five minutes in length, it's a generous, it's a generous nearly hour and ten-minute record.

Things get under way with a Bill Payne-Bill Wray tune called Drivin' Blind, that serves to introduce Ms. Murphy's vocals, and with its Cajun-influenced accordion, shows a bit of the album's Louisiana flavor. <<>>

Paul Barrere in recent years has been a prominent voice in the group, and he is featured as lead singer on Blue Jean Blues, which has more of the classic Little Feat sound, including his prominent slide guitar. <<>>

One of the strongest tracks on the album is Cadillac Hotel, which spotlights Ms. Murphy, and combines more of the Little Feat sonic trademarks, including the slinky boogie beat and some of Bill Payne's jazzy chord changes. <<>>

Even though there is a track called Cajun Rage, the New Orleans groove reaches its height on a great tune called Romance Without Finance, sung by Ms. Murphy. The way everything comes together provides a good example of why the members of Little Feat have been so much in demand over the years as studio musicians. <<>>

Also with Crescent City influence is All That You Can Stand. only in this case, it resembles the old Dr. John the Night Tripper records. <<>>

The one slower tune on the album is Borderline Blues, a tasteful piece that bears Bill Payne's songwriting trademarks, even though he shares songwriting credit with Murphy, Wray, Tackett and Barrere. <<>>

The title track Ain't Had Enough Fun is perhaps the biggest surprise on the album. It's an acoustic, gospel influenced tune whose lyrics are a celebration of the good life. <<>>

The album ends with its only cover tune, an rhythmically contagious version of the Ray Charles hit Pretty Good Love. The band is at its funky best, with the addition of the horn section that pops up here and there throughout the CD. <<>>

After Little Feat have been together on and off for 26 years now, their new album Ain't Had Enough Fun ranks among their best. Some might argue that the group has not been the same since the death of Lowell George sixteen years ago, and indeed they really aren't the same. With the addition of vocalist Shaun Murphy, the group's sound seems to have been revitalized. The group's trademark rhythmic groove is captured well on this CD, thanks to the tasteful production of Bill Payne and Bill Ray, and their contributions to the songwriting. The addition of a New Orleans ambience to their sound, such as a Crescent City shuffle beat here and there, and some Cajun flavored accordion, adds to the album's strength. About the only thing I miss is one of Bill Payne's outstanding long jazzy tunes. And the general constancy of the beat over such a long album does make the last few tracks a bit less exciting when listening to the CD in one sitting.

Sonically, I have no complaints about either the mix or the general sound of the recording. Long-time veteran engineer Ed Cherney avoids audio trendiness, and gives a fairly honest representation of the group, while keeping a degree of studio gloss.

Ain't Had Enough Fun is an album Little Feat's many fans over the years will not want to miss.