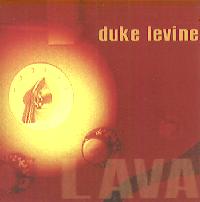 The electric guitar has been basic to rock and roll ever since the beginning. And while singers usually take the spotlight, the music has created plenty of guitar heroes. So another phenomenon going back to rock's early days has been instrumental recordings spotlighting the guitar. This week we have an album that continues the great tradition of instrumental rock guitar, looking to the past for inspiration while highlighting the level of musicianship more typical of today's best players. It's the latest recording by Boston-area guitarist Duke Levine entitled Lava.

Like many of the fretmen who preceded him in the instrumental rock legacy, Levine is best-known for accompanying others, having recorded on each of the albums by the folk duo The Story, plus singer-songwriters Ellis Paul and Carol Noonan and guesting with the band the Del Fuegos. Since 1995, Levine has been a part of Mary Chapin Carpenter's touring and recording band, winning a lot of recognition for his work with her. He has also been active as a studio musician including work on soundtracks to various films.

When it comes time for studio guitarists to make their own records, the best ones tend to refrain from using it as an opportunity to show of their hot licks and technical prowess. Instead, some will make a album that tends to run toward the more serious compositional approach, while others will make a recording that is just good fun, while including some interesting licks for guitarophiles to discover when they listen carefully.

The latter is the approach taken by Levine, on this, his third solo release. It is reminiscent of the Hellecasters, the trio of studio guitar mavens from the West Coast. There is a bit of twang, including some nods to guitar pioneers like Duane Eddy, plus some country-style, a little rockabilly, some Byrds/folk-rock style jangly 12-string guitar, and even a take-off on the soundtracks to the old spaghetti Westerns. And like the Hellecasters' albums, there's a spirit of good fun that runs through Lava, from the humorous little guitar noises he injects here and there, to the infectious beat and the way he does cover tunes in unexpected ways. The result is a great album that runs toward the lighthearted in sound, but features some very tasteful and occasionally tricky musicianship. And with the revival of interest in venerable styles in rock, the album might well appeal even to those trend-surfers looking for something cleverly retro.

Joining Levine are members of a band with whom he regularly works, bassist Paul Bryan, organist Tom West, and drummer Lorne Entress. Guests include two of the members of the idiosyncratic alternative band Morphine.

Though he is known on record for his tasteful, folky guitar that has helped to define a kind of new singer-songwriter style, for this album Levine definitely looks back to the styles originated by the rock guitar pioneers while adding his own distinctive twist. He takes a lot of different approaches on the album, but no style that's less than about 25 years old. In addition to his electric guitar, he also plays some acoustic rhythm, and pedal steel guitar to give the country tunes some added twang. His sense of tradition and good taste come through constantly, while he is not afraid to have a little fun, especially with the cover tunes he does, like his low-down swamp version of Peggy Lee's hit Fever.

The album begins with one of Levine's originals, Quiz Show, whose title even suggests an earlier period. It's an infectious boogie-woogie shuffle, with some humorous little guitar interjections. <<>>

One of several tunes that suggest an old Western movie is Lover's Lane. Levine plays the tremolo-laden melody line on his low strings in the classic technique of Duane Eddy's twangy guitar. Levine adds an occasional musical teardrop from his steel guitar. The piece is a real gem. <<>>

Along similar lines is the title track, Lava, which features a little added Italian-style accordion, making for a subtle musical play on the concept of the old Italian-made Western movies on which so much music in this style was heard. Perhaps even more subtle are the fine points of Levine's really tasteful guitar work. <<>>

One of the unexpected approaches to covers comes on Buckaroo, made famous by Buck Owens. Instead of country twang or Bakersfield honky-tonk, Levine and band give it an approach reminiscent of the Byrds psychedelic-era album The Notorious Byrd Brothers, complete with Indian tonality and a tamboura. <<>>

A Freddie King blues composition, Manhole, is given a distinctly rockabilly treatment, complete with the old combo-organ sound provided by Tom West. <<>>

A contrast to that is the original Levine composition Far Away, with its haunting, introspective sound, and a bit of mandola -- which is a larger-sized mandolin -- added for color. It's a really nice composition whose melodic line is hard to get out of your head. <<>>

As mentioned, the most bizarre cover on the album is Levine's version of the old standard Fever. The guitarist and his band take it down to the swamp, while adding a techno-flavored drum-machine rhythm. <<>>

Oddly, the least successful track on the CD is a cover of a tune by the king of twang guitar, Duane Eddy. Stalkin' features the saxophone of Morphine's Dana Colley, and is given an ominous sound. Levine's soloing is resourceful, but the track just never catches fire, and at seven minutes in length, just seems to go on endlessly. <<>>

That segues into the closing piece, another Levine original called In the Dark. It's one of his fine laid-back compositions on which he imaginatively uses various guitar colors to set up a seductive mood, on which he does some impressive soloing, especially toward the end. An interesting sonic touch in the echo-treated Rhodes electric piano that recalls old jazz-rock fusion from the likes of Weather Report. <<>>

Duke Levine's new album Lava, is a great instrumental guitar record that you don't have to be a rock guitar fanatic to enjoy. Much of the music, hinting at styles of the past, is downright fun. Some of the tracks are even danceable. But those for whom guitar is a passion will also find much to appreciate in Levine's exceptionally tasteful and often subtle playing and formidable technique that makes what he does sound so effortless. The combination of his nicely-written original pieces, plus his clever treatment of the cover tunes makes for an attractive mix of material.

Sonically, the album brings no complaints from me. Levine produced the Lava himself together with film composer and record label-owner Mason Daring, with the bulk of the engineering and mixing by Chris Rival. Though much of the album's music has a retro mood, fortunately, the folks in the control room did not try to duplicate the crummy sound of those old records -- something that has often happened. There's even a fairly decent dynamic range, especially on the more moody-sounding tracks.

Retro rock seems to be in, and though versatile guitarist Duke Levine is hardly one to glom onto the latest fad, with some luck, Lava could well find audiences from younger listeners as well as from those whose memory goes back to glory days of rock guitar.