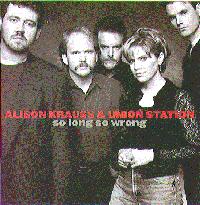 In recent years, bluegrass has experienced a kind of renaissance. Back in the early 1980s, a style which came to be called "new acoustic music" arose, founded by such artists as David Grisman, Tony Rice and later Béla Fleck who brought a combination of instrumental virtuosity and jazz influence to this very American music form. Much of this "new acoustic music" was instrumental. But as time went on, some of the mainly younger pickers combined so-called progressive bluegrass with the musical sophistication of the new acoustic genre, and more recently they began turning to the kind of lyrically thoughtful material and vocal style usually associated with the best singer-songwriters. The result has been some genuinely outstanding music. Among the finer examples are the group Chesapeake, who draw on others' songs, and Tim O'Brien, who himself is a superb songwriter. This kind of music is also seeing some popularity beyond the regular bluegrass audience. Country star Iris Dement got her start in bluegrass, and this week's group has also become surprisingly popular.

Fiddle player Alison Krauss was a prodigy, appearing with her debut album at the age of 14. She immediately attracted public attention with her combination of fine fiddle playing, and more memorably high, clear vocals. She even found herself profiled in such mass media as People magazine. Her 1990 release I've Got That Old Feeling, with an all-star studio band including Jerry Douglas, Alison Brown and Sam Bush, sold remarkably well for a straight bluegrass release. Now about five years and three albums later, including a kind of greatest hits collection, at the ripe old age of 23 she is out with So Long So Wrong, with her regular band Union Station. And it's what I like to call an "ear grabber," a record that is so remarkable you can't help but be drawn into it, and one you will not soon forget. It will also likely change quite a few more minds about bluegrass being some kind archaic folk music or something they used to do on the Grand Ole Opry. The material is sophisticated and literate, the arrangements creative, and the performance is subtle and melodic. But for most listeners the arresting beauty of Ms. Krauss' vocals will be a focal point hard to ignore. She was a very fine singer at age 18 on I've Got That Old Feeling, but by now, she has developed into a singular talent, combining her winsome clarity with a wonderful emotional range.

Despite Ms. Krauss' memorable voice, this is indeed a band effort. Union Station includes guitarist Dan Tyminski, banjo man Ron Block, who a few years ago was on our Homegrown Music series as a member of Weary Hearts, mandolinist Adam Steffey, and bassist Barry Bales. All also sing, and five of the fourteen tracks on So Long So Wrong feature lead vocals by one of the guys in the band.

Like many bluegrass groups, Union Station imports almost all of its material. Ms. Krauss is not much of a songwriter, and there are only two songs on the CD written by a Union Station member -- Ron Block. Instead, the group turns to some of the raft of fine, but generally unsung songwriters who play their trade in Nashville. They also do two songs by ex-Doobie Brothers member Michael McDonald, who wrote a song with Alison's brother Viktor Krauss.

The instrumental lineup is classic bluegrass, and the group adds no extra instrumentation, but the sound is rather untraditional for the most part with the arrangements emphasizing the interpretations of the songs, rather than hot picking. But a close listen will reveal an outstanding and especially tasteful level of musicianship.

To show its untraditional bent, the album begins with its title track So Long So Wrong which in turn commences with a kind of psychedelic or maybe new age electronic sound <<>> before settling into the classy acoustic mode of the album. Like much of the material here, this song written by Patrick Brayer and Walden Dahl, is the kind of composition suitable for a sensitive singer-songwriter. Ms. Krauss delivers it beautifully, while the rest of Union Station provides a backing that is both traditional bluegrass in instrumentation and quite intricate in arrangement. <<>>

To show the group's magnanimity, the following track features a vocal by mandolinist Adam Steffey. The song is one of two on the album written by songwriter Bob Lucas. It's a great piece of lyric-writing using a flood as a metaphor. It has a more conventional bluegrass sound, and once again, the result is most worthy. <<>>

One of the most remarkable songs on the CD is one of two written by Mark Simos, another up-and-coming songwriter. Deeper Than Crying, provides the kind of depth and subtlety of material that Ms. Krauss and the group can turn into a very memorable performance. <<>>

In more familiar bluegrass territory is another Bob Lucas song The Road Is a Lover with the lead vocal by Dan Tyminski. <<>>

The other Mark Simos song is also a gem. Find My Way Back to My Heart is sung by Ms. Krauss with her typical elegance while the group's instrumental backing on this harmonically intricate composition shows how the acoustic instrumentation of bluegrass can be used with great subtlety to enhance the emotions of the song. <<>>

To show that the group hasn't entirely abandoned their traditional bluegrass roots, AKUS, as they call themselves, do a hot version of a very old song, Little Liza Jane. <<>>

Also from the public domain is I'll Remember You, Love, in My Prayers, nicely sung in a high-tenor style by Dan Tyminski. <<>>

One of the two songs by Michael McDonald dates to 1982. I Can Let Go Now, is well done, but compared to the level of the rest of this CD, it seems a little too close to Nashville. <<>>

One of banjoist Ron Block's two original songs is called Pain of a Troubled Mind, which also has a more traditional bluegrass sound. Block does the vocal with Ms. Krauss doing the high harmony. Again, the group underscores their more straight-ahead bluegrass credentials. <<>>

The album ends with another Ron Block composition, a gospel song called There Is a Reason, sung by Ms. Krauss, in an arrangement that is a sort of country folk ballad hybrid. Ms. Krauss plays a couple of violas instead of a violin on this track. <<>>

One of the things that struck me about So Long So Wrong is that even though the songs are relatively long for bluegrass, every one seems to go by very fast -- ending just as one was getting engrossed in the classy sophistication of the performance. That, of course, is an old show-biz maxim -- leave 'em wanting more. Alison Krauss and Union Station certainly does leave one wanting to spend the whole day listening to their striking blend of memorable vocals and superb musicianship, in the service of some choice material, much of it being given its first recording. Like Chesapeake, Tim O'Brien and Laurie Lewis, Ms. Krauss and company are taking bluegrass in a yet another new direction, combining some traditional elements, plus the instrumental prowess of the New Acoustic Scene with the lyrical and emotional depth of the best singer-songwriters. The result is thoroughly memorable listening.

The album's mix by Gary Paczosa is commendable. The acoustic instrumentation has a warm, pleasing sound, and the recording captures Ms. Krauss' vocals especially well, allowing them to blend into the instrumentation as they often do. However, the old audio bugaboo of compression reared its ugly head in the mastering stage of the CD, with the audio levels pushed to within 1 db of absolute digital max for much of the CD, squashing out the dynamics of the acoustic instrumentation, and occasionally coming close to outright distortion on the vocals. Someone should have told well-known mastering engineer Doug Sax that this is subtle acoustic music and not processed pop.

So Long So Wrong by Alison Krauss and Union Station is hardly traditional bluegrass, and the died-in-the-wool purists will likely grumble about that. But the superb musicianship and vocal work of this quintet take this great American music form pioneered by Bill Monroe, to yet another new level, and in the process will perhaps introduce even more people to the pleasures of acoustic music.